Ordinary People Are The Best Part Of Rogue One

It's long been a fact of life that the Force-wielders in the science-fiction saga created by George Lucas pull more attention than other characters in the fiction. The flashy powers and mythic architecture surrounding Jedi and Sith scratch the itches for action and metaphor most handily. But the bulk of the people fighting for freedom in the Star Wars universe don't own lightsabers. Rogue One is about those people, the class of citizens down on the ground being chewed up by the wheels of the Empire.

Jyn Erso, Rogue One's main character, doesn't have a prophesied destiny to fulfil. Before the events of the film, she's a leftover survivor, an unknown player in a radical fringe of the rebellion who became a criminal. Initially, it's only her connection to a special someone that makes her valuable, something which she knows and uses resentfully. Her plan after helping the Rebels is to go back to being a nobody. Like her, Cassian Andor comes across as a conflicted operative for the Rebellion. He's not the guy who inspires others by uplifting speeches or sterling example, he's the one doing dirty jobs for a good cause.

They're both characters that riff on the Han Solo iteration of the "loveable scoundrel" template. However, Solo himself is sold as abnormally talented to other characters and fans — the best pilot in the galaxy, essentially — which has the effect of making him seem less out of place in the company of Luke Skywalker and others. Jyn and Cassian don't have that level of mystique or accolades surrounding them. They're grunts, people who usually become cannon fodder when the top-class heroes and villains clash.

The same goes for Chirrut Imwe and Baze Malbus. With his preternatural combat aptitude and quasi-religious aphorisms, Chirrut is the closest we get to an anointed-by-fate character, but he lives in the shadow of a defeated faith, begging for change to help him subsist. Based on what we see in the film, nobody's ever hung a medal around Baze's neck and, if he ever received such awards, he'd probably have hocked it for food or ammo. Bodhi Rook is a workaday cargo pilot who risks a comfortable routine to follow his conscience's call for justice. Even K-2SO is a bit of an unlikely would-be saviour. The cranky, reprogrammed Imperial droid is meant to be a functional piece of machinery, a cool-to-look-at and useful bit of furniture. 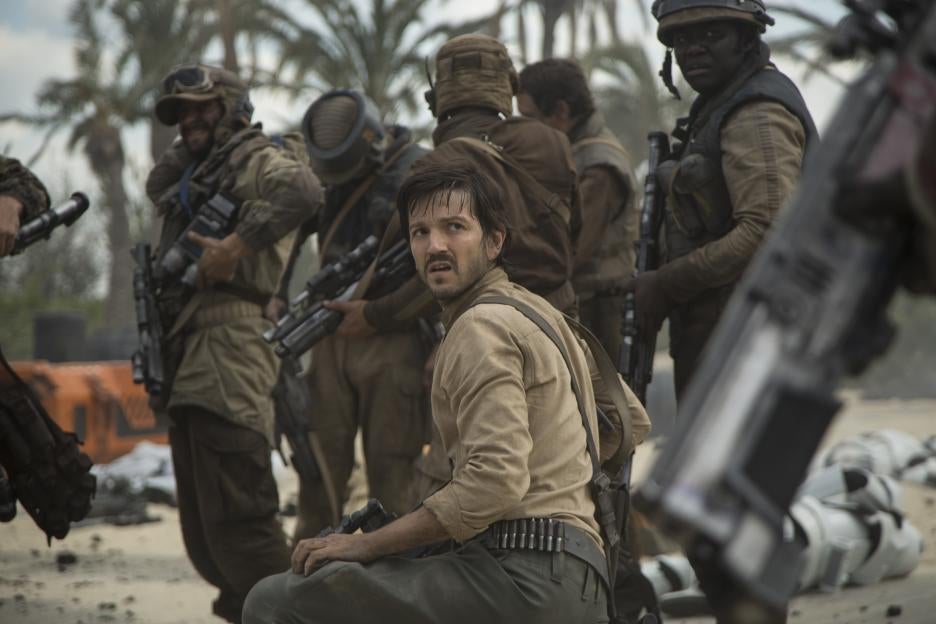 The from-the-bottom-up concerns of Rogue One continue as the plot progresses, too. The scene where the leadership council argues the best course of action clearly cuts across class lines, with Senators ready to go into hiding and the rank-and-file soldiers calling to stay the course. It's the groundswell of disobedience from Jyn, Cassian and the Rogue One squad that slaps the Rebel Alliance elites across their collective faces and stirs them to action. They, not Luke Skywalker, are the face of the Rebellion here ,and their spotlight is especially bittersweet when you know that continuity probably means that they all die in the offing.

One of my favourite moments in the film is at the end when Chirrut Imwe realises he's going to have to be the one to throw the master switch that allows the Death Star plans to get transmitted off-planet. As I watched, I thought, "OK, here's where we'll see him finally use the Force after a lifetime of fervent faith. He'll Force-pull the switch from way over there and then die a fulfilled death." But what actually happened instead was even better — Chirrut pulled that switch with his own two hands and died with a faith that was no less valid for never having had special powers. He didn't need to be an alpha-level Force user to be a hero; all he had to do was act in accordance with his beliefs.

Star Wars is the story of the Force in many ways and the Force moves through all living things. What Rogue One does is put the kind of characters who anonymously die in fiery X-Wing crashes or battlefield explosions at the heart of an important story. That shift in focus — a glimpse at what it'd be like to be a run-of-the-mill person in Star Wars fiction — was my most fervent wish for Rogue One: A Star Wars Story and I'm so very glad it came to pass.