This Chimpanzee Wearing A VR Headset Should Make You Very Uncomfortable 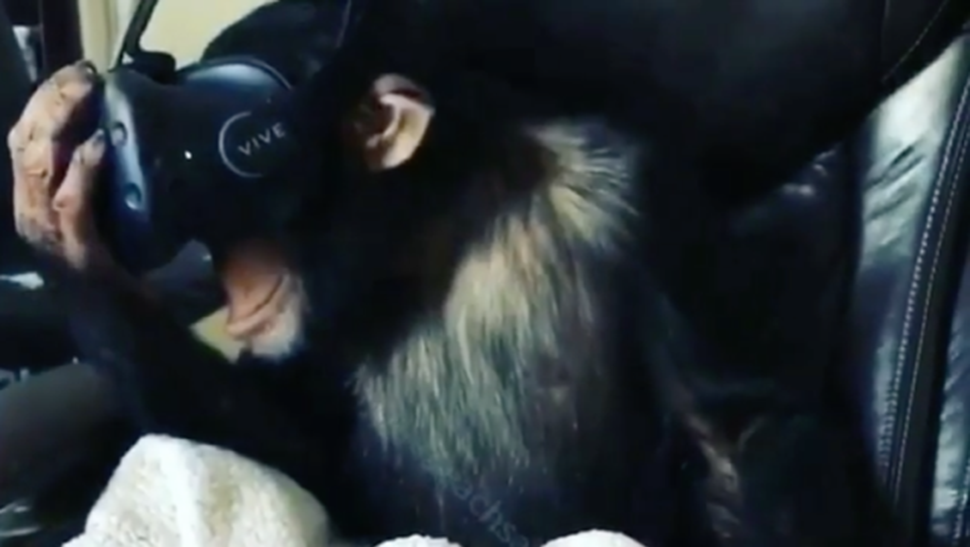 This week, Bhagavan “Doc” Antle, the founder of The Institute for Greatly Endangered and Rare Species, posted an Instagram video of a chimpanzee wearing an HTC Vive virtual reality headset. There’s no sound, but the brief clip shows the chimpanzee sweeping its hands across the headset and reaching out to grab at the air in front of it — not unlike what some humans look like while wearing the device.


The difference, of course, is that any human wearing the device likely is aware of what he or she is experiencing, and what the headset itself does. It’s impossible to know for sure what’s happening inside this chimpanzee’s mind, but it’s probably safe to say it doesn’t have the same ability to comprehend what’s happening.

“Even a child, you can explain what it is — you can give them background information. You can’t do that with a chimpanzee,” Kerry Bowman, a bioethicist at the University of Toronto and the president of the Canadian Ape Alliance, told me. “Chimpanzees are different and their brains are different. it could trigger other responses we’re not aware of.”

I watched the clip several times. At first, I found it amusing — it reminded me of those YouTube compilations of people trying VR for the first time — but it very quickly became deeply unsettling. Bowman agreed. “I found it troubling,” he said. “I wouldn’t say the chimpanzee looks incredibly distressed, but he does look disoriented.” (It’s worth noting that some people have reported nausea and dizziness after using the headsets.)

“The question it raises for me is, to what end? What is this for?” he added. “If chimpanzees are in captivity at all, you have a really heightened ethical responsibility.”

The caption for the video doesn’t offer up much in the way of an explanation — it merely notes that the chimpanzee is “playing in virtual reality” — but Antle and his organisation, also known as Myrtle Beach Safari, are somewhat notorious for this kind of thing. The South Carolina “safari” starts at $US299 ($407), and promises visitors the chance to interact with various rare and endangered animals, including chimpanzees, lions, tigers and wolves. But the destination also has a checkered history with the Department of Agriculture, and PETA slapped it on its list of “roadside zoos to blacklist”. (We reached out to Myrtle Beach Safari to get some more detail on the video, but had not heard back at time of writing.)

Antle, whom Rolling Stone once described as the “alpha male of the compound”, is a well known — and controversial — figure in the exotic animal world, and has worked with the creatures for years. In addition to the “safari”, he also uses the animals for entertainment purposes. (He worked on Britney Spears’ infamous 2001 VMAs performance.)

Some, however, aren’t exactly enamoured with Antle’s business of putting exotic animals on display for human amusement. Frans de Waal, a prominent primatologist and an expert on chimpanzee behaviour, sent me a blunt, one-line response when I emailed him about the video: “Entertainment chimpanzee. Should be illegal.”

There have been some cases in which captive primates appeared to “enjoy” watching what was happening on a screen, but Kerry Bowman noted that an immersive experience like virtual reality is different. (He also pointed out that while some of those cases were research-based, it’s not clear whether that’s the case for what’s happening in Antle’s video.) I asked Bowman why, if the chimpanzee was unhappy, it didn’t try to rip the headset off, for example. He told me that captive chimpanzees are often trained to comply with whatever situation they’re placed in.

Mostly, however, he found the video dispiriting.

“The mindset is not these magnificent creatures that live in these tropical forests,” he said. “It shows a mindset of — they’re property.”