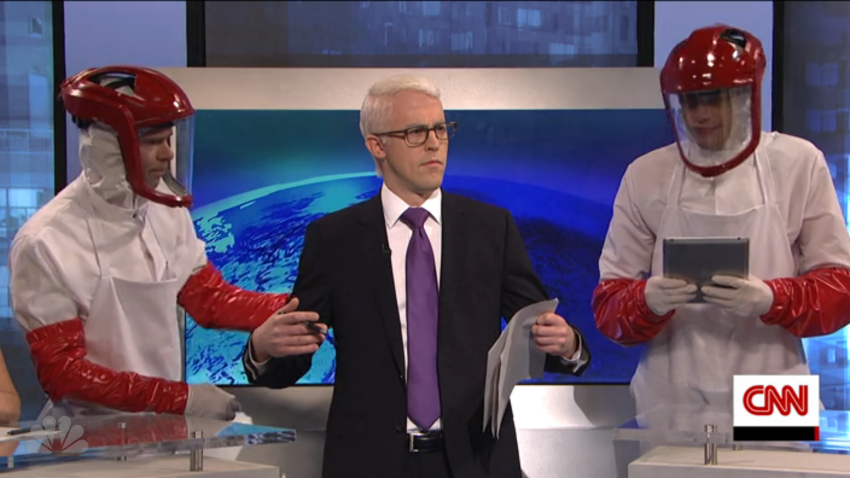 Video: Ever wonder why news programs seem to constantly repeat themselves with coverage of the 2016 election and the future president of the United States? Turns out, it’s because they’re on a loop. Let’s hope the Man in Black doesn’t show up.

Saturday Night Live‘s latest episode included a sketch where CNN host Anderson Cooper and his series of talking heads (along with one “smug” Trump supporter) keep Ctrl V-ing themselves when talking about President-Elect Donald Trump’s latest Twitter battles, campaign pledges and rumoured cabinet picks. Every single scandal goes too far, crosses the line and cannot be tolerated. At least, until the next one comes along.

However, Cooper slowly begins to realise that he’s done all this before, questioning the very reality of continually berating the latest situation, only to forget it five minutes later. Just in time, the literal “host” and his panel are frozen by Westworld‘s clean-up crew to remove the anomaly and restore the loop. Cooper’s slowly carted away for inspection and replaced by another reporter-turned-host, Jake Tapper. Copy, paste, repeat as needed.

So yep, SNL‘s proven that all of CNN’s hosts are actual hosts, whose words and actions were manufactured years ago by an old white dude who fought being pushed out of his own empire. So that’s why Wolf Blitzer spent so much time covering Malaysian Flight 370. He was trying to find the centre of The Maze, but only found more holograms.