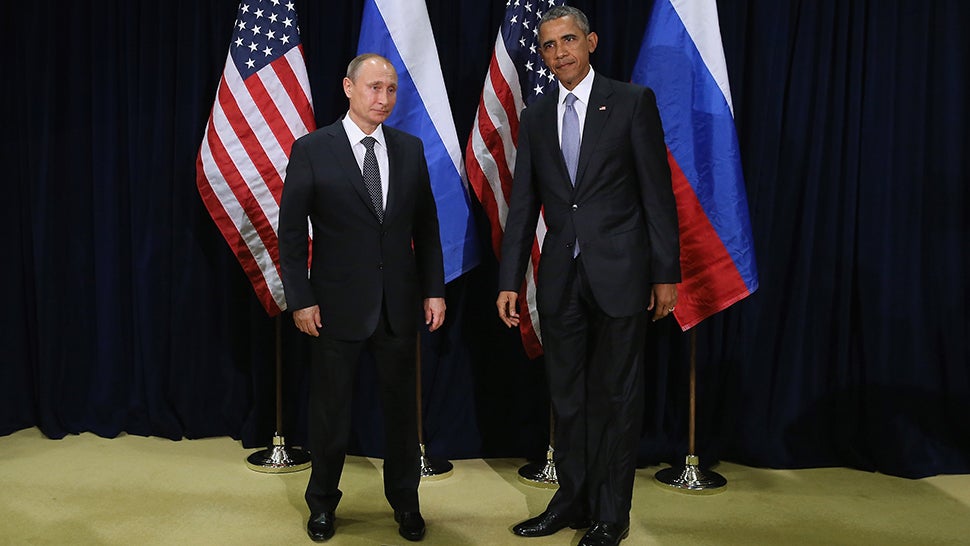 Speculation about Russia's interference in the US Presidential election has run rampant throughout the campaign. Now, researchers from two independent groups have confirmed that Putin's minions wielded a complex misinformation apparatus to unleash a "firehose of falsehood" on the American public.

The Washington Post reports that researchers have found clear evidence that Russia uses a network of bots, troll farms, websites, social media accounts and official news services that work in tandem to create their own echo chamber. Fake news stories that aimed to "punish" Hillary Clinton would originate with one arm of the propaganda machine and be amplified by others. Another primary focus was to give the appearance of "heightened international tensions" and a growing threat of nuclear war with Russia.

Clint Watts is a fellow at the Foreign Policy Research Institute who has been working with two other researchers on a study of Russia's meddling since 2014. "They want to essentially erode faith in the US government or US government interests," he told The Washington Post. "This was their standard mode during the Cold War. The problem is that this was hard to do before social media."

Indeed, social media has made it extremely easy to spread a message that would only have been possible with formal media buys on major networks in the past. The Washington Post explains how Watts study arrived at its findings:

The researchers used Internet analytics tools to trace the origins of particular tweets and mapped the connections among social-media accounts that consistently delivered synchronised messages. Identifying website codes sometimes revealed common ownership. In other cases, exact phrases or sentences were echoed by sites and social-media accounts in rapid succession, signalling membership in connected networks controlled by a single entity.

The Washington Post also received early access to a study from nonpartisan research group PropOrNot that will be officially released today. It identifies 200 websites that push Russian talking points to a combined audience of 15 million Americans. According to PropOrNot's findings, planted stories were viewed 213 million times.

One of the most powerful tools Russia was able to leverage was its ability to use official state news organisations RT and Sputnik to weave false or misleading stories alongside legitimate news. These sites would also pick up fake news stories that were being promoted elsewhere in an effort to push news algorithms like Facebooks to identify them as trending.

The reports find that Russia was behind some of the earliest and most alarmist stories involving Clinton's health. One of these stories was debunked by The Daily Beast but the researchers characterised the true story as like "shouting into a hurricane". The Daily Beast's clarification "reached 1700 Facebook accounts and was read online more than 30,000 times". PropOrNot's research found "Russian propaganda reached 90,000 Facebook accounts and was read more than 8 million times".

The research shows that many of the greatest hits of fake news over the past few months can be traced to Russia, and the US government has traced hacked emails from the DNC and voter database breaches back to Russia.

Russia's tactics rely heavily on "useful idiots" — a term that originated during the Cold War to describe those who don't know they are being manipulated to spread false or damaging information. Many of the sites that published fake news weren't aware that they were doing it for the good of Russia. Julian Assange might be a useful idiot if the US government is to be believed. Donald Trump — who has had nothing but praise for Vladimir Putin throughout the campaign and who has been guilty of sharing fake news on multiple occasions — might qualify as a useful idiot as well.

And then, of course, there is someone like Mark Zuckerberg, who said immediately after the US election that it was a "crazy idea" to believe that fake news swayed voters. Since then, Zuckerberg has gradually begun to acknowledge that Facebook has a problem and announced some vague steps to combat it. But without a greater amount of transparency and independent review, it's impossible to say whether Zuckerberg will continue to act as a kind of useful idiot himself. As long as Facebook keeps its data so firmly under lock and key, we will only have dubious outsider studies and wild speculation like Forbes' estimation that the social media company is making half of its revenue on fake news.

Still, it's unclear what companies like Facebook and Google can do to solve this problem once they have fully acknowledged the size of it. Both companies have said they will stop taking ad money from fake news organisations which is one step in the right direction. For now, Robert Orttung, a GWU professor who studies Russia, tells the Washington Post that Russia "use[s] our technologies and values against us to sow doubt".

Former US ambassador to Russia Michael A. McFaul says that it isn't Russia's goal to win. "It's to make everything seem relative," he says. "It's kind of an appeal to cynicism."