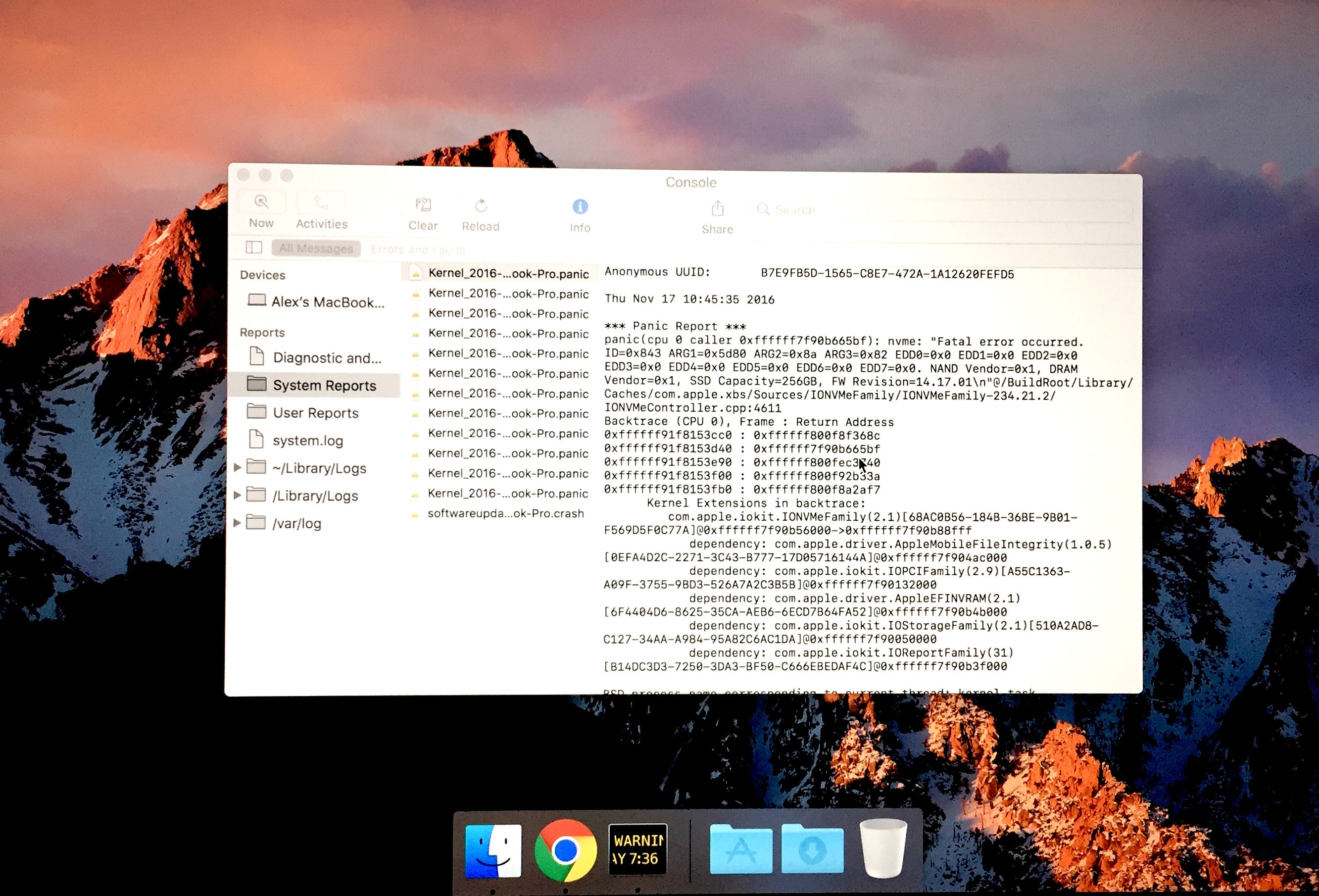 Damn this new MacBook Pro. As of this very moment I’ve had the new 13-inch MacBook Pro with Touch Bar for just a few hours. It’s small, sturdy and typing my password in was pleasant enough. That Touch Bar looks really neat too, and when I set up Touch ID to login from the Touch Bar, I felt like I was in the future.

But $US2500 ($3361) worth of overpriced, hyper-engineered Apple laptop has now crashed 23 times — a full dozen in the first hour I had this thing.

The last 11 crashes occurred more sporadically because I spent the last hour and a half on three different calls with Apple in an effort to resolve the problem. I will say that the company’s US tech support personnel were very kind and contacting them was easy. You sign in to your Apple account on the support website, answer a question and a call is scheduled. The website had me run a few tests while Apple sets up the call, then your phone rings and there’s a gracious member of tech support on the line.

The first representative guided me through resetting my PRAM and arranged a callback. The computer crashed. Rep Two had me reinstall the OS. The computer crashed. Rep Three saw the detailed notes and immediately said I needed to speak to a MacBook Supervisor (whatever that is). I was then placed on hold for 10 minutes. The MacBook Supervisor took one look at the issue and put me in contact with the internet sales team.

So tomorrow I will pack up my brand new MacBook Pro. It will not be hard, apart from keeping the device stable enough to remove all my personal information. The charger never even came out of its wrapper. The box is still sitting on top of its packaging on my bed, cellophane shining.

I’ll get a new MacBook Pro eventually. First, I have to ship Apple the old and wait for FedEx to tell Apple I’ve shipped it. Then Apple will “start building” me a new one. There is no guarantee of a ship date. Maybe December. Maybe earlier.

This is standard operating procedure for Apple, and it makes sense for a company that deals in millions of phones every year. But a $US2500 ($3361) “custom built” laptop is a far cry from a $1079 smartphone. The expectations are higher for that customer base. We expect things like a device that works out of the box — particularly when it’s supposedly “custom built”. If I’m spending $US2500 ($3361) and they’re specially installing RAM and an i7 processor, is it really too much to ask that they test the damn thing before it leaves the factory? There are plenty of smaller companies with cheaper products that do just that.

Once upon a time the splurging for an Apple product felt worth it. You were paying for an outstanding operating system and a breezy computing experience, as well as the best tech support in the game. A new computer would have been shipped the moment the return label was created for the old one. Or they might have even encouraged a visit to an Apple Store, where a tech would have been able to physically repair the issue.

Instead, my new “custom built” laptop arrived DOA. I’m not the only one with problems, either. While the new 13-inch MacBook Pro only started arriving in users’ hands today, the 15-inch had a few days head start, and numerous owners have flocked to the MacRumors forum to crow about “GPUGate“. Those fancy and woefully underpowered video cards are creating some massive glitches on the display.