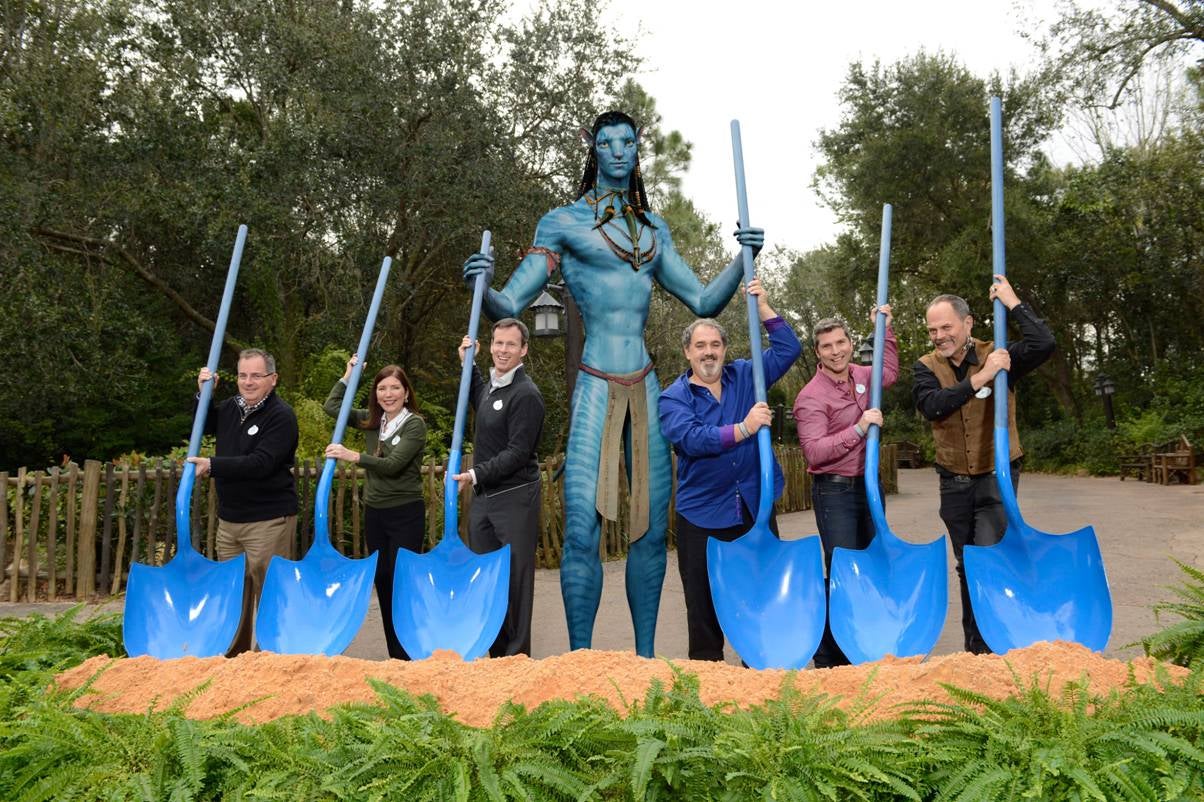 Do you remember Avatar? It was released seven years ago as the single biggest movie of 2009. But unlike other sci-fi blockbusters with broad family appeal, you’d be hard pressed to find anyone today begging for a sequel, let alone clamouring for theme park rides based on the film. But that’s just what we’re going to get next winter at Walt Disney World. The company announced that Avatar Land will open at Disney’s Animal Kingdom park during the winter of 2017. And the fact that it’s opening long after anyone cares about Avatar shows precisely why it’s so hard to keep Disney’s Epcot theme park “futuristic”.

Executives, many of whom are no longer with the company, break ground on Avatar Land in January 2014 (Disney)

My obsession with past visions of the future owes a lot to Epcot. When I was a kid in the 1990s and visiting the Orlando theme park with my family, something about the park didn’t feel quite right. I absolutely loved it, don’t get me wrong, but there were a lot of things about Epcot that didn’t seem very futuristic. Many elements of the park looked like how people of the 1970s and ’80s might have envisioned the future. Mickey Mouse’s silvery jumpsuit perhaps best captured this vein of retro-futurism. But there was a good reason for the park’s dated futurism: It’s really hard (not to mention really expensive) to update a theme park quickly.

The Epcot theme park opened in October of 1982 as a shadow of what it was supposed to be originally. It was first envisioned by Walt Disney as a functioning experimental city in the mid-1960s, but it opened as a World’s Fair-themed park in the early 1980s. The park took years to get rolling, and with half of Epcot’s real estate dedicated to futurism, it was unintentionally set up to be a static landmark to yesterday’s visions of tomorrow.

Avatar Land was dreamed up in 2010, not long after the movie’s original theatrical release in December of 2009. After years of planning, Disney broke ground on the themed area in January of 2014, and it will finally open in the winter of 2017 (summer in the US). This trajectory is completely normal in the theme park business, as it takes a lot of planning and money to make something like this function properly. But Epcot has always been operating under the same constraints, which keeps the park from ever feeling truly “futuristic”.

Every time Epcot gets an update, there’s a big question about how well a given attraction will age. Imagine you were tasked with building a ride about transportation of the future in Epcot today. What would you include? Driverless cars? Delivery drones? When your ride isn’t going to open for seven or eight years, it’s hard to plan for what will still be considered “futuristic”. We’re already seeing elements of these technologies functioning in society today. Would a driverless car ride be laughable by 2025? We don’t know. You’re not just planning for what’s futuristic today. You’re planning for what will still be futuristic a decade from now.

The fact that there’s no real fan excitement over Avatar isn’t Disney’s fault. The movie was the biggest hit of 2009, grossing $US750 million ($1 billion) in the US alone. At the time, making a themed land about the movie seemed like the safest bet in the world. But it hasn’t turned out that way. There’s virtually nobody begging for an Avatar-themed environment these days. And despite promises of multiple sequels, there’s not much interest in James Cameron’s jumbo smurfs as we approach 2017.

Disney will probably be able to weather the storm of disinterest around Avatar in the near term, and might even luck out if Cameron releases his Avatar sequels sometime soon. But with the future clipping along at a steady pace, it’s hard to guess what Epcot might do in an attempt to become more dynamic and, best case scenario, relevant to futurism for the countless families visiting each year.