Deactivating Facebook Was The Best Decision I Ever Made

It’s Saturday afternoon. I have things I could be doing. I could be watching television. I could be playing a video game.

I could be volunteering at a homeless shelter, an old folks home — Christ I don’t know. I could be exercising, or cooking, or going for a walk with my kids.

I could be interacting with them. Sitting with my family and friends who are happily playing a board game in the next room. But nah…

I’m moping on the couch refreshing Facebook. Over and over again. Endlessly. Compulsively. I’ve decided that’s way more interesting. That is the life experience I’ve chosen.

A weird paralysis. I run through my options, the possibilities. Maybe I’ll do this thing, or that thing instead. Nope. Nothing feels inspiring. Nothing convinces me to drag my arse off the couch into action.

But I’m not happy either. Not content. Far from it. I’m not indulging in scintillating discourse online. I’m not laughing with friends. I’m not developing new relationships. On the contrary I’m miserable, frustrated. I’m waiting for people to ‘like’ my thing. Because that feels nice. Because that makes me feel good about myself.

It make zero fucking sense. I don’t need affirmation. I don’t need this. I am a content person. I consider myself ‘happy’. I don’t suffer from anxiety. I’m not depressed. Yet in this moment I feel completely lost. Tired, wasted and broken.

On some fundamental, sub-conscious level we all understand that social media – in particular Facebook – is an unnatural method of communicating with other human beings.

Thisisfine.jpg. I signed up for this. I understand the benefits. I’m Scottish. I live on the opposite side of the world to my parents, my brother, my friends. Facebook has made keeping in touch with those people exponentially easier. That’s great.

My wife. Very serious: “you spend too much time on Facebook.”

Me, throwing my head back, eye-roll: “naaaaaah.”

“Facebook is making our relationship worse and you’re setting a bad example for our children.”

Because I work in media (and therefore a tremendous wanker): “I need to use Facebook for my job.” Worse: “I am a digital native.”

I use the words that addicts use. “I can stop any time.”

It’s hard to be completely honest about the reasons why I use Facebook. It requires taking a long hard look at myself and accepting hard truths that reflect poorly upon me. That I’m selfish and narcissistic. That sometimes the opinions of strangers matter more to me than those I take for granted. My family, my closest friends. My wife.

That I find it comforting to dictate conversations. Facebook allows us to determine when we communicate, what we communicate and what we have to listen to. It’s the reason, I suspect, why so many people disappear into their phones during actual social situations. In comparison to Facebook real life is a chaotic mess of misread visual cues and tonal subtleties.

And crucially, one must abandon a certain level of control in order to participate.

In Facebook you are the master of your own social universe. You construct that universe meticulously.

I have no issue with that. For some that’s empowering. Some need that – myself included – but my own personal endgame was a problem.

I’d take my son to the park.

It makes me desperately unhappy to write and read those words.

So one Sunday morning I decided to quit.

For the longest time I’d been extremely defensive about my use of Facebook, but I’d made a personal realisation. Two actually.

The second: Facebook was stopping me from doing other things. Most importantly it was literally stealing time from my family.

It was actually literally difficult.

First of all, de-activation. It’s buried in the settings. Right here…

You have to click ‘security’, which honestly isn’t where you’d expect the deactivate tab to be. I suspect this is by design.

Yep, there it is. All the way at the bottom there.

But that’s where the fun begins. Click through and you find this… 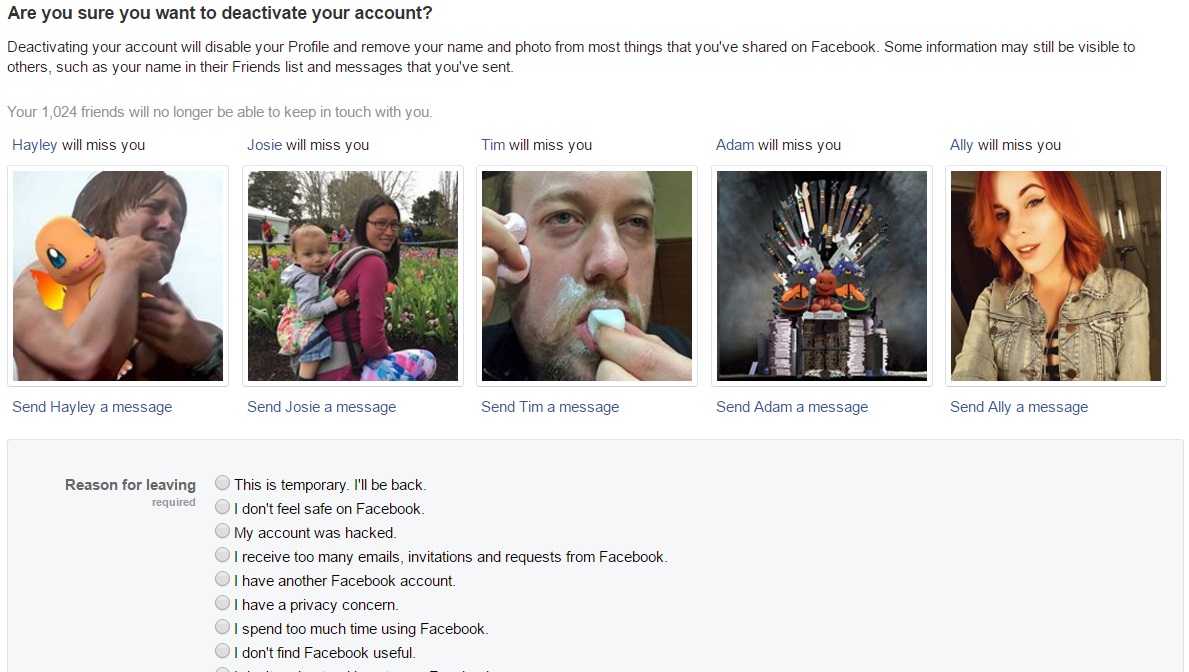 An incredibly manipulative, last ditch attempt to change your mind. Your friends will miss you. These very specific people (almost certainly selected based on some sort of terrifying algorithm) will miss you.

Facebook won’t let you leave until you select a reason why? A dangerous, spurned lover bolting the door shut. “Why? Who is she? WHO IS SHE?”

As soon as you select a reason, another pop-up.

The lock unbolts, I slide through the door. I escape. I run like fucking hell. I’m free.

And then: the relief. 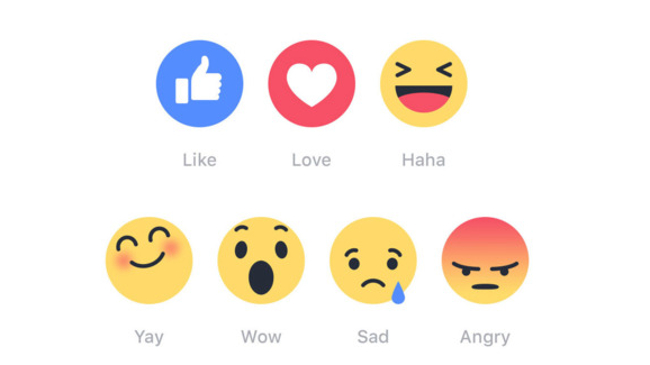 The sheer overwhelming relief. That surprised me. Being perfectly honest I expected to miss Facebook more. I expected a certain tension in my stomach. I expected to be seduced by my fear of missing out. That people were talking, talking about me and I wasn’t there to take part or defend myself.

I expected some sort of withdrawal. A social media detox.

What happened: I suddenly had more time. A lot more time.

Like most addicts I constantly underestimated the impact my bad habit was having upon myself and the people around me. I procrastinated with Facebook, but it also sucked up much of my free time meaning that – post de-activation – I found myself able to do the things I previously complained I didn’t have time for.

Over the last month I’ve been able to look after my kids, take care of household chores, spend time with my wife. This time literally didn’t exist before but now it does. I literally drew this time from the Facebook void and my life feels more fulfilling as a result. It’s almost terrifying.

These benefits also transferred to my work-life. At work I always had a Facebook tab open. I had good reason for this — in my line of work there are numerous benefits to remaining active on Facebook – but I couldn’t believe how productive I was without it. It wasn’t just the fact that the Facebook tab was removed from my browser, it was the knowledge that — with my account de-activated – there were no notifications for me to check, no conversations to contribute to. Nothing. To me, Facebook literally didn’t exist.

I cannot explain how liberating that felt. 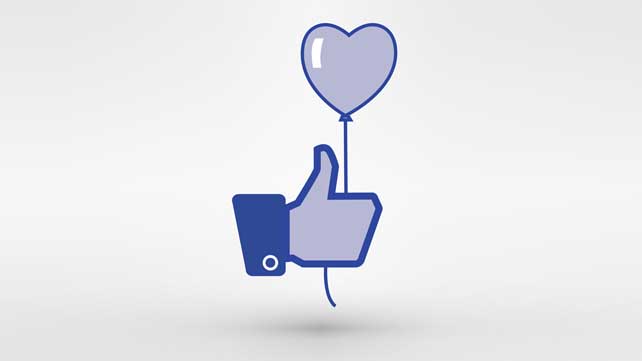 More than a few times, out of pure habit, I found myself typing ‘facebook.com’ into my browser, but then I’d stop. I’d remember. “I’m not doing that now.”

But there were some issues.

In sharp contrast to how incredibly difficult it wass to de-activate a Facebook account, it’s troublingly simple to re-activate it. Literally all you have to do is log-in. The same way you would if your account existed in its regular state. On multiple occasions I accidentally re-activated my account by simply using Spotify. So many aspects of our lives are tied to this motherfucker.

But outside of those ‘accidents’, I was able to stay off Facebook successfully. It was actually relatively easy.

A large part of that was tied to my initial commitment to leave the site. Ironically, the trouble I went to when de-activating my account forced me to invest fully in that decision.

Also, the knowledge that I didn’t exist in that space was powerful. My photos weren’t being looked at, my statuses weren’t being read, discussed or ‘liked’. It was almost as though my online existence was locked in a temporary stasis — a comforting oblivion, a blank zen state.

And the realisation: none of this fucking even matters.

At one point I logged back on. A moment of weakness inspired — of course — by my own narcissism. I published an article I’d been working on for months. I wanted to post the link on my page.

I pretended it was to help traffic, to help the site. It wasn’t.

I wanted to be at the precise centre of my own little universe.

But it was temporary, and the self-imposed Facebook vacation was enough to make me acutely aware of why I left in the first place.

Even today, with my account re-activated, I’ve become incredibly cognizant of what I post and don’t post on Facebook. I think about the burden of posting: the notifications, the cycle, the replies, the drama. The need to check and check and check. The compulsive nature of that behaviour.

The day I went back to Facebook was the day of Donald Trump’s election. On my Facebook page: wall-to-wall despair. On that day Facebook was in the midst of an audible, collective wail. It was brutal to watch.

Arguments in comments, blaming, shaming. A potent, fluid negativity leaking through the cracks. A post I kept seeing over and over and over again: “I’m taking a break from social media” “I’m struggling with anxiety/depression” “This is overwhelming”. On that day it felt as though the negative impact of posting and engaging with social media platforms was exacerbated to the point where many people couldn’t take it.

The day I de-activated my Facebook account was Sunday and it was a beautiful day. It was hot outside and I got sunburned. My wife and I took the kids to Bondi Beach for Sculptures by the Sea. It was crowded and windy as hell. The sand beat about my face. My three-year-old son couldn’t deal, so I had a 15 kilogram lump of flesh on my shoulders for most of the trip.

I took some beautiful photographs of my family. I didn’t upload them. We had an amazing lunch, but I didn’t feel compelled to share that with strangers. As we drove home my wife said it was the best Sunday we’d had in ages. That didn’t feel like a coincidence.

I thought about the Sundays where I might have been absent. There, but not present. My mind elsewhere, on the discussions I was having, the comments I’d made. The days spent dreaming up the perfect post, the perfect retort. My contentment morphed into a tremendous sense of guilt.

And I mourned for the hours and minutes I’d allowed to slip away.