Ants Exchange Messages When They Make Out 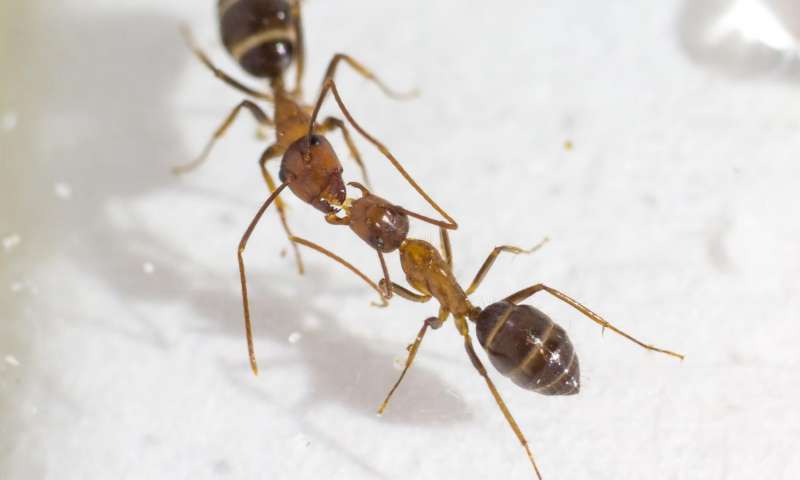 When people mash their mouths together, it’s usually to display attraction. When ants do it, however, it’s a different story.

According to new research published in the journal eLife, ants use trophallaxis — the practice of exchanging liquids mouth-to-mouth — not only for passing food back and forth, but also as a method of communication.

Previously, it was thought that trophallaxis — which has been observed in several other social insects, including termites and bees — was primarily a method for distributing liquid food between members of a colony. But after studying the behaviour of Florida carpenter ants, the researchers discovered that the liquid also contains an array of chemicals used for digestion, growth, nest mate recognition and immunity. It also contains a juvenile hormone that helps regulate development.

“Our results reveal that the transmitted liquid contains much more than food and digestive enzymes,” the researchers concluded. “These findings suggest that trophallaxis underlies a private communication mechanism that can have multiple phenotypic consequences.” In essence, kissing allows ants to communicate with each other and pass on important tools that help ensure the colony’s continued success.

According to Adria LeBoeuf, an evolutionary biologist at the University of Lausanne and one of the paper’s authors, the existence of a juvenile hormone was especially intriguing.

“[It’s] a big upset,” LeBoeuf told Science. “It suggests they’re deciding what the larvae are going to be when they grow up.” Somewhere, every helicopter parent is cursing the fact they weren’t born as an ant.