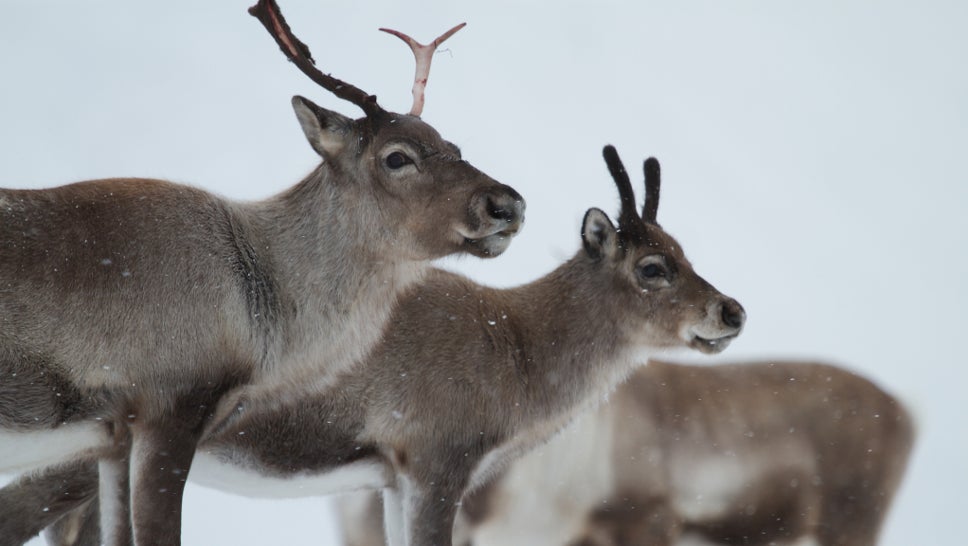 A pair of extreme weather events in 2006 and 2013 caused mass starvation among reindeer in Arctic Russia. Researchers have now linked these episodes to climate change and the associated loss of sea ice.

A new paper published in Biology Letters points to global warming as the culprit behind tens of thousands of reindeer deaths in the Russian Arctic in two incidents spanning the past 10 years. In both 2006 and 2013, the combination of sea ice retreat, unseasonably warm temperatures and heavy rains contributed to the onset of impenetrable snow cover, which prevented reindeer from foraging on their usual food supply of lichen and other vegetation. These conditions led to mass famines in both years, killing 20,000 reindeer in 2006 and 61,000 in 2013.

Loss of sea ice might seem like a good thing for reindeer, but in this case it's proving to be catastrophic. As the researchers from the University of Lapland in Rovaniemi, Finland, showed in the new study, the retreating sea ice produced downstream effects that ultimately resulted in unusually thick layers of ice in the reindeer's habitat. 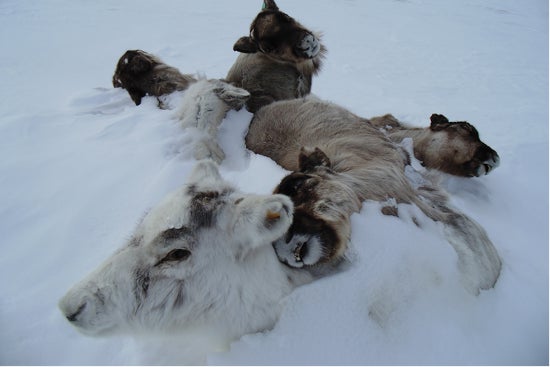 During the month of November in both 2006 and 2013 — a time of year when ice typically starts to build up — ice in the Barents and Kara seas in northern Russia began to retreat. The loss of sea ice began to affect the weather, producing unusually high levels of evaporation and humidity. Unseasonably warm temperatures gave rise to rain clouds, which produced torrential rains in areas where indigenous Yamal Nenet herders, an ancient nomadic culture, lead their reindeer.

With the ground completely covered in waterlogged snow, the temperature then plummeted to -40C, and it stayed that way for the rest of the winter. Solid ice covered the landscape, preventing the reindeer from accessing their natural food source. Reindeer can chip away at ice when it's just a few centimetres thick, but during both of these episodes, the ice was simply too deep. During the 2013 famine, the ice covered an area around 27,000 square kilometres, resulting in the 61,000 reindeer deaths, a death toll that accounts for nearly a quarter of the population.

Disturbingly, it's not going to get any better any time soon for the reindeer or the indigenous herders. This autumn is already witnessing severe losses in sea ice, prompting fears of another mass famine this coming winter.

Adding insult to injury, the Russian government has ordered a cull of 250,000 reindeer in response to a recent anthrax outbreak. This past August, a child died and 90 people were hospitalised when anthrax spread to humans from a thawing reindeer corpse.