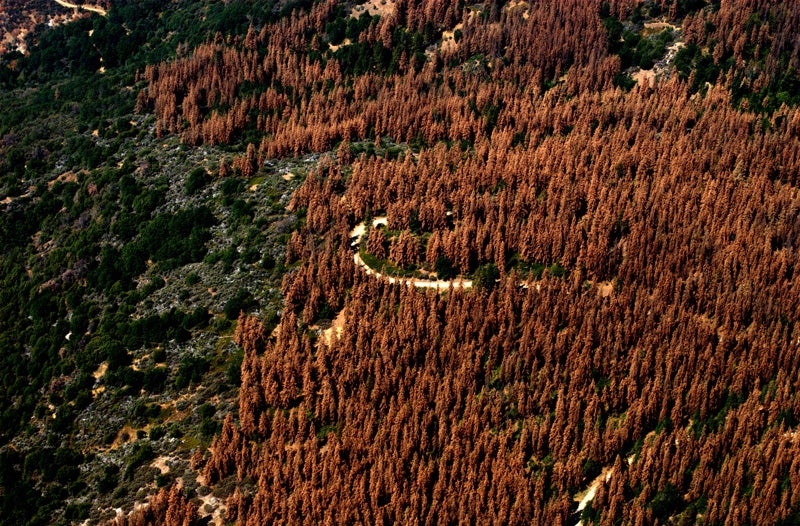 California drought update: It’s still bad. How bad? According to the U.S. Forest Service, 102 million goddamn trees have now died in the state since 2010, including 62 million trees in this year alone.

“The scale of die-off in California is unprecedented in our modern history,” one Forest Service official told the L.A. Times. “[Trees are dying] at a rate much quicker than we thought.”

Officials say that five years of drought combined with increased bark beetle activity and higher temperatures have led to the die-off, which represents a more than 100 per cent increase in dead trees across the state since 2015. Answers differ, however, on what should be done about the trees. From The Christian Science Monitor:

Many say that getting the dead trees out of the forests is the answer. Officials have suggested turning the trees into lumber or burning them for electricity. Experts have suggested that having too much dead wood on the forest floor can actually damage the soil when wildfires do happen, since fires have too much fuel and therefore burn at very high temperatures.

But some environmentalists have advocated for leaving the trees in the forests, saying it’s part of the life-cycle of a forest for dead wood to decompose and provide wildlife habitat on the forest floor.

“We don’t want too much and we don’t want too little,” ecologist Chad Hanson told the Associated Press, arguing that fire suppression efforts have led to unnaturally green forests. “This is not too much.”

In a statement, Agriculture Secretary Tom Vilsack warned that the dead trees represented a threat to public safety.

“These dead and dying trees continue to elevate the risk of wildfire, complicate our efforts to respond safely and effectively to fires when they do occur, and pose a host of threats to life and property across California,” said Vilsack.

“USDA has made restoration work and the removal of excess fuels a top priority, but until Congress passes a permanent fix to the fire budget, we can’t break this cycle of diverting funds away from restoration work to fight the immediate threat of the large unpredictable fires caused by the fuel buildups themselves.” [Motherboard]