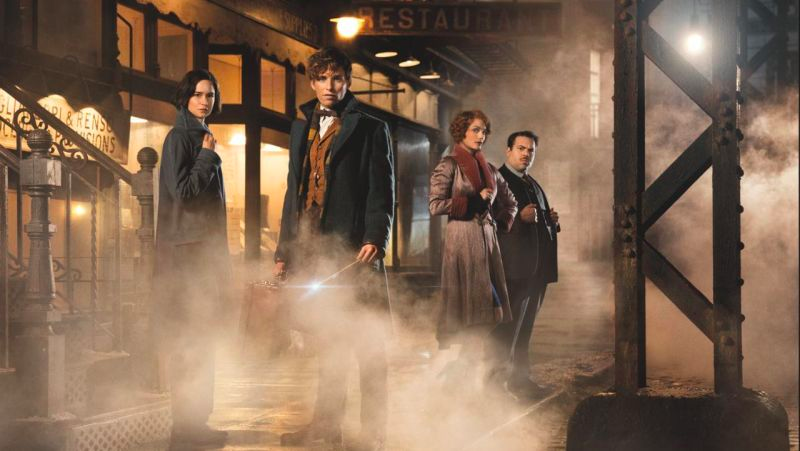 At a special fan event today, hundreds of people were treated to a special sneak peek at the beginning of Fantastic Beasts and Where to Find Them, which will be released November 17. There aren't a lot of things to spoil the plot in the beginning, but there are a lot more connections to Harry Potter than you'd expect. The very first thing in the movie isn't Newt Scamander (Eddie Redmayne) or his fantastic beasts, but an attack by Gellert Grindelwald in a misty castle in Europe.

Following that are a series of close-ups on various newspaper headlines and articles (the American equivalent of the Daily Prophet is "The New York Ghost". It isn't as good at puns as the real paper it's named after.) Almost all the headlines are about the rising threat from Grindelwald, while one mentions tighter security at Hogwarts and another mentions anti-magic sentiment being at all-time high. All of these newspapers do a better job of establishing the world than any one of Rowling's ridiculous articles on Pottermore have.

There's also a scene where America's lead wizarding cop, Percival Graves (Colin Farrell, who wears possibly the best clothes ever in this part), shows up to a building in New York City that's been destroyed by a black cloud with bright eyes — of course the muggle cops don't believe the witness, but something rips up the street and leaves Graves standing in a ditch.

Both of these scenes hint at something much larger going on in the movie than what the trailers mostly talk about, which is Newt Scamander letting a bunch of magical creatures loose in New York City and making an enemy of the United States' wizarding government. In fact, the only beasts in the beginning of the movie are whatever destroyed the street and a niffler that breaks out of Newt's suitcase when he's stopped at an anti-witch rally on the steps of a New York bank.

Grindelwald is apparently going to play a larger and larger role in these movies as they go on, so introducing him right at the start makes some sense. We also know that Grindelwald's story is intimately tied into Dumbledore's — and we know from the trailers that Dumbledore and Newt have a relationship. However, I didn't expect Fantastic Beasts to so immediately establish that the bright, glittering world we saw in the trailers is mired in a fight against darkness. There's a lot more depth to this than expected.

I've also got to say that Newt, in the scenes where he's going through Muggle customs and watching the rally, has a huge dollop of naïveté that you will either find charming or frustrating. It's probably going to depend hugely on whether or not he gets over it as he get swept up in events larger than himself.

The beginning of the movie is beautiful looking, there's no denying it. It immediately immerses you in the world, even when you're painfully aware that New York never actually looked like the set they have built. The magical artefacts are worn in, the clothing wonderfully designed and the effects for the creatures are on point. It all looks great, so now it's just up to the writing and the acting to make it a good movie.