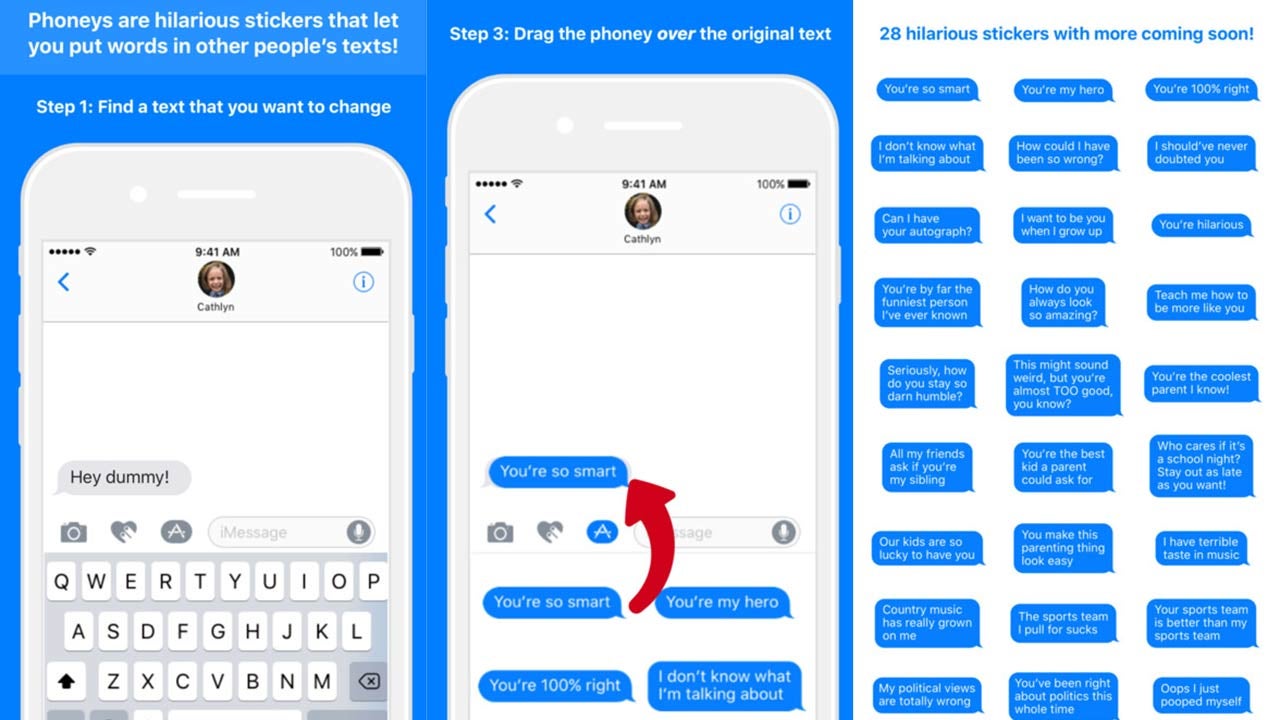 The developer of a clever sticker pack for iOS has been told by Apple that he has to change how the stickers look and act or else the stickers will be pulled from the App Store.

Adam Howell first had the idea for Phoneys right around the time iMessage launched and he launched the sticker pack this week.

(think Apple would ever approve these?) pic.twitter.com/B0diNw9gU6

After write-ups in TechCrunch and a mention by popular blogger John Gruber, the $1.49 sticker pack shot to the top of the Top Paid and Top Grossing sticker packs for iMessage.

This sounds like the makings of a great developer success story. Unfortunately, its not. Yesterday, roughly 24 hours after the app hit that mark, Bill from Apple reached out to Howell.

Bill was nice, but to the point. Apple’s lawyers weren’t happy that Phoneys got through the review process. The stickers couldn’t be blue or green, they couldn’t use San Francisco as the typeface, and the app could no longer be marketed as a “prank” app, because Apple doesn’t approve prank apps (even though I myself had never used the word “prank” when marketing Phoneys, others did, and I certainly understood where he was coming from). They were not going to pull the app, Bill made sure to emphasise. They’d give me a week, until next Thursday, to fundamentally change it so that the bubbles looked nothing like iMessage bubbles, instead looking something closer to “comic book cartoon bubbles”. I said OK, thanks a lot Bill, and that was the end of the conversation.

Howell also writes that after the sticker pack hit top grossing and top selling status, he started to get negative reviews from users who didn’t understand how the sticker worked. Howell would like to provide better documentation for those users and an update to the app itself, but now he can’t because Apple won’t let him update the app unless it is to fundamentally change everything about the concept.

This puts Howell in a precarious position.

On the one hand, if I update the stickers over the next week like Apple has so generously allowed me to do, I will be “breaking” Phoneys for everyone who has already bought it. And the entire spirit of the app will be lost in a less fun and much less clever “comic book cartoon” bubbles version.

On the other, if I don’t make the updates, Phoneys will get pulled from the store next week, letting everyone who has already bought the stickers use them until they someday delete them, but upsetting all those who bought Phoneys thinking I’d update it with more stickers in the future. Plus, obviously, I’ll no longer continue making money off of an app that is still the #1 paid app in the iMessage app store.

I’m honestly not sure what I’m going to do. Neither option is good. They will both upset large groups of people. But they’re the only two options I have.

What a bummer. Phoneys is still in the App Store so if you want it, you might want to get it now.