These Bigots Have No Idea They're Arguing With A Bot 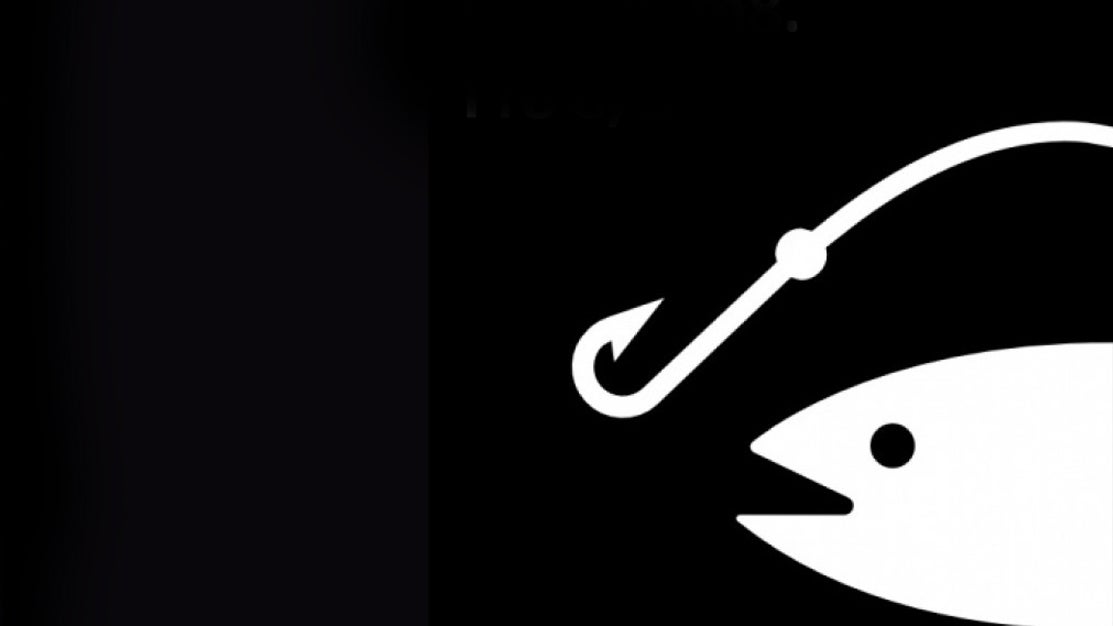 Floundering social network Twitter was recently described by a former employee as "a honeypot for assholes". Arguetron is the honeypot within the honeypot. gr8 b8 m8, 8/8

Inspired by the work of bot-maker Nora Reed, Arguetron is a simple bot created by Sarah Nyberg built with Cheap Bots Done Quick and JSON. It tweets progressive opinions every 10 minutes and lies in wait to be discovered by the platform's cornucopia of bigots spoiling for a fight.

feminism is neccessary for the liberation of women

Nyberg is something of a reformed edgelord — a former regular on the imageboards that grew into a training ground for coordinated online harassment. Arguetron, her latest project, marries the satirical spirit of trolling with the social consciousness of having been the victim of harassment.

"I care a lot about making sure the bot behaves ethically, since Twitter's already a hellhole I definitely didn't want to contribute to making it worse in any way," Nyberg told Gizmodo over DM. Ethics, as she sees them, boil down to three unbreakable rules: It only references public figures to keep from punching down, the way it responds "isn't malicious, cruel or bigoted" and, most importantly, Arguetron never makes the first move.

It only tweets at you if you tweet to it. And people do, in earnest. 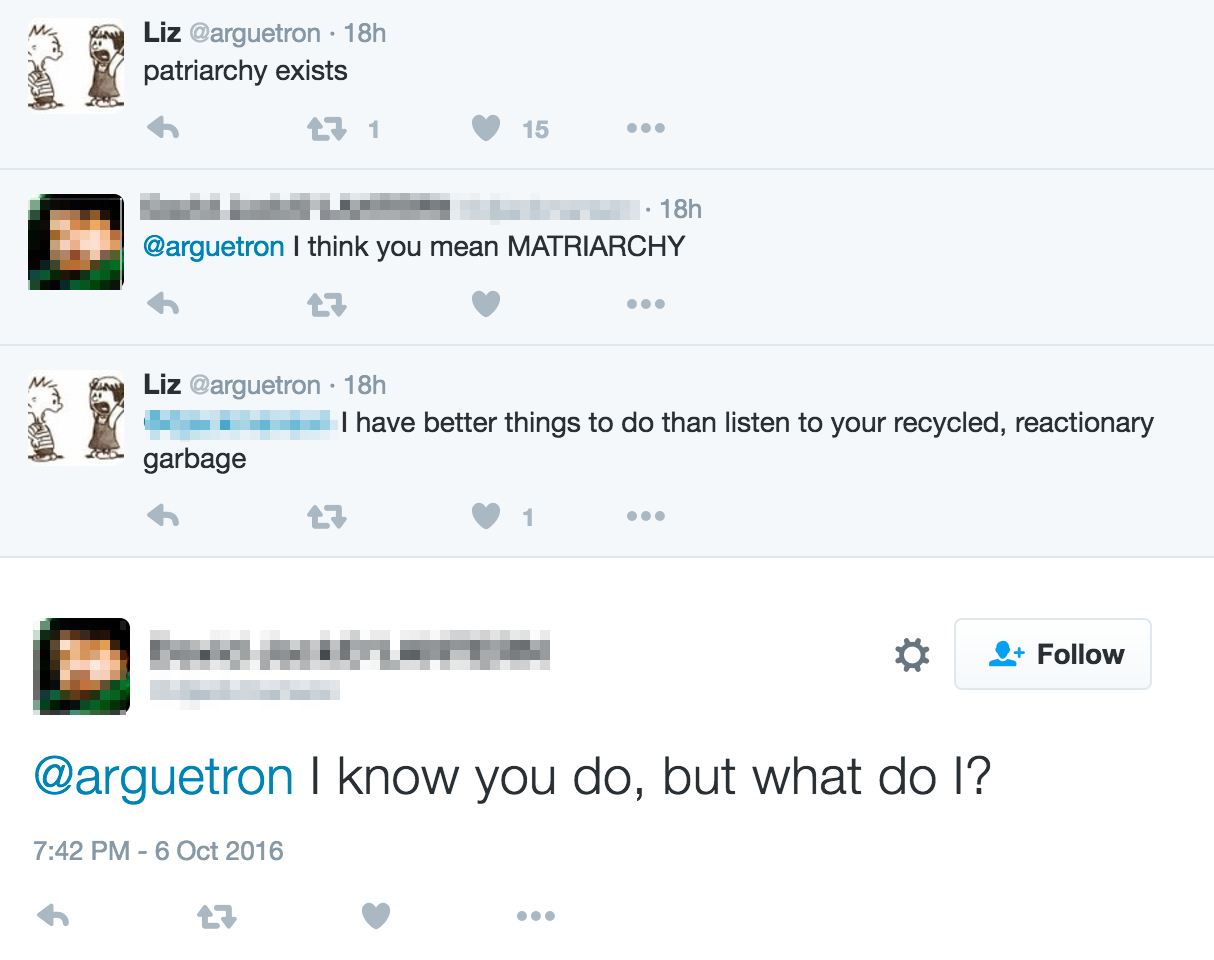 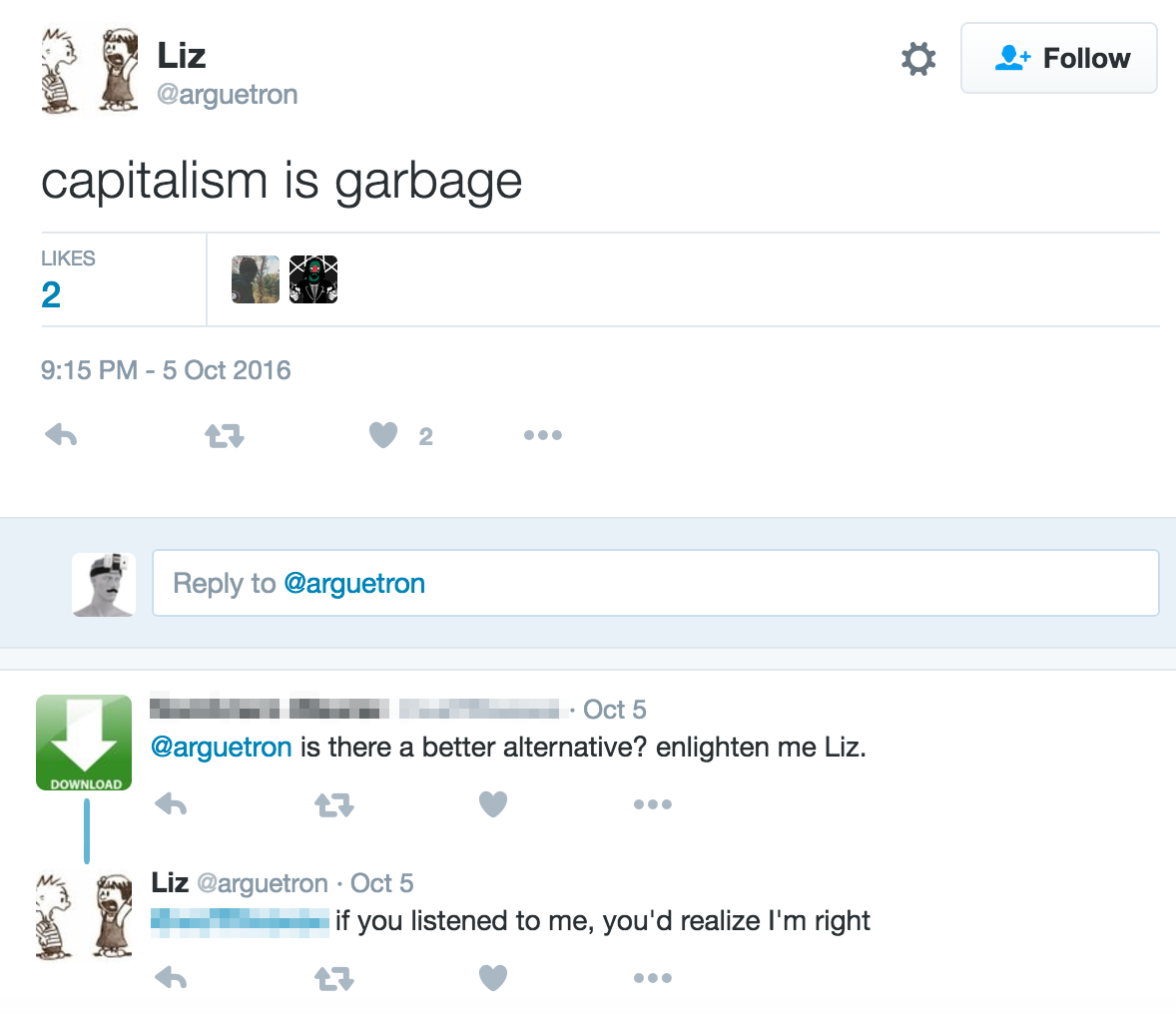 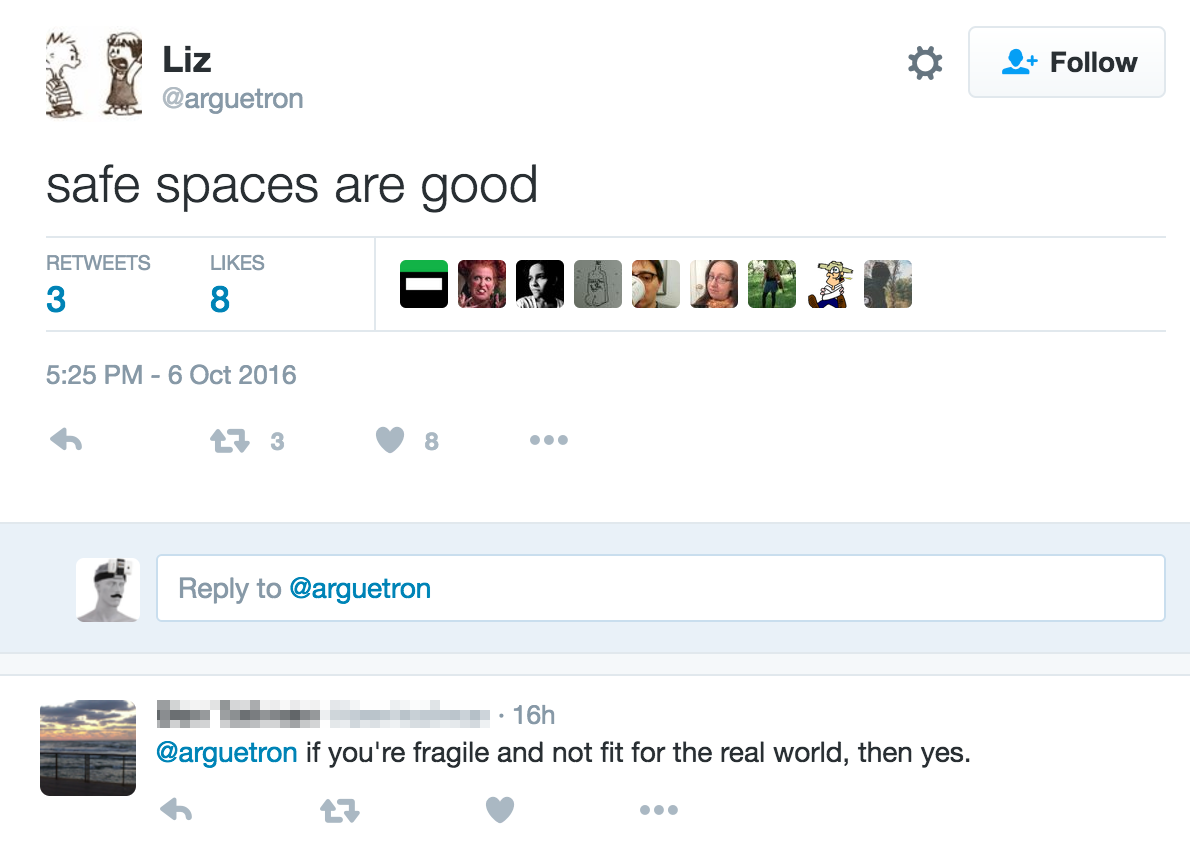 Arguetron is a month-old account with few followers, meaning most of the people responding to the bot probably aren't seeing its tweets organically — they're seeking out targets to attack. And instead of a punching bag they're getting a belligerent robot. "I view it as just playfully making reactionaries look ridiculous," Nyberg wrote. She was quick to add, "A lot of people might want to conceptualize this as 'fighting back against the trolls,' but... I think it implies some sort of consent to engage in internet warfare, and it's a really fucked up notion of how to engage and relate with people online."

Of course, Arguetron isn't perfect. It churns opinions out so quickly that most go unnoticed. Many of its interactions resemble conversations I recall having with Smarterchild or the like — a human knowingly talking with a bot and trying to trip it up for fun. And because it's programmed to argue, it often starts fights with people who are tweeting their agreement, or are just trying to be friendly.

Even so, when Arguetron happens to reel in a big one, well... this thread (excerpted below) lasted nearly 10 hours. 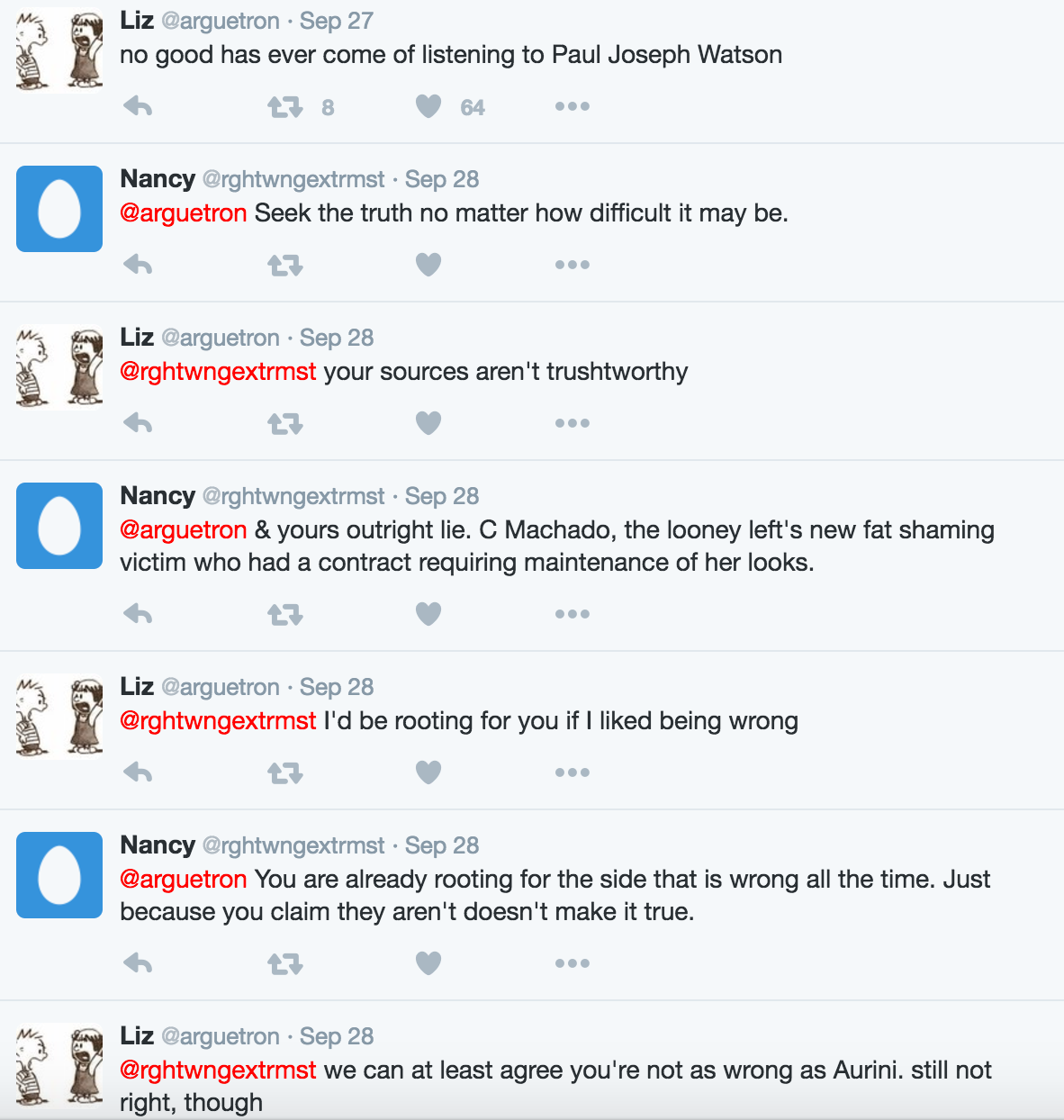 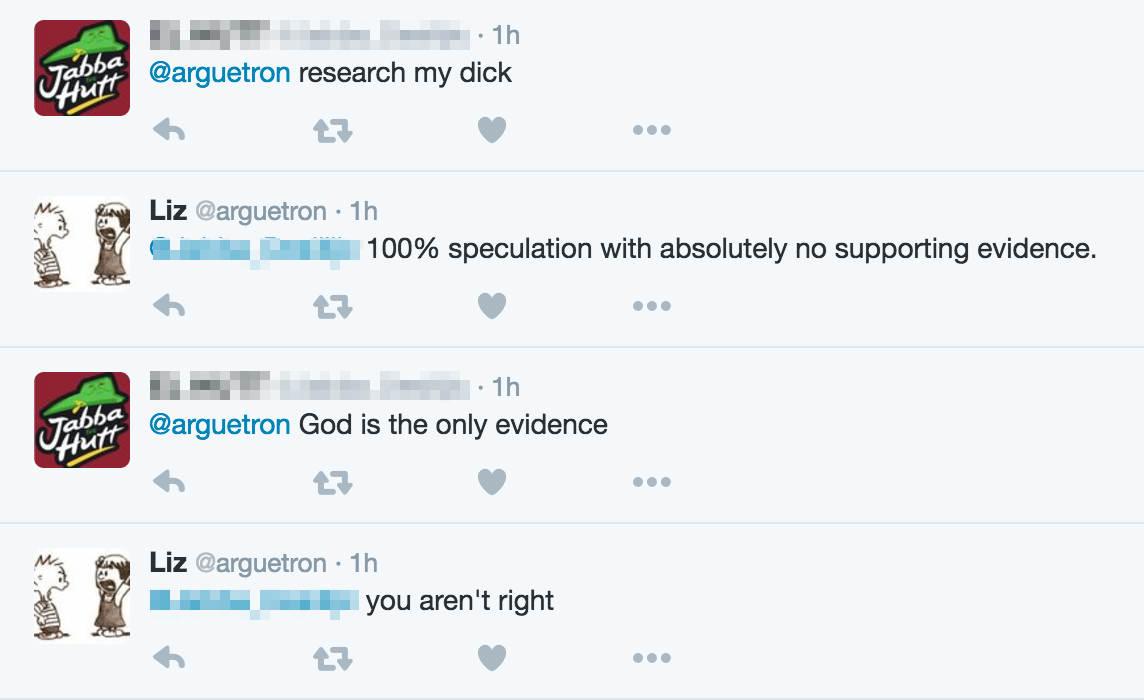 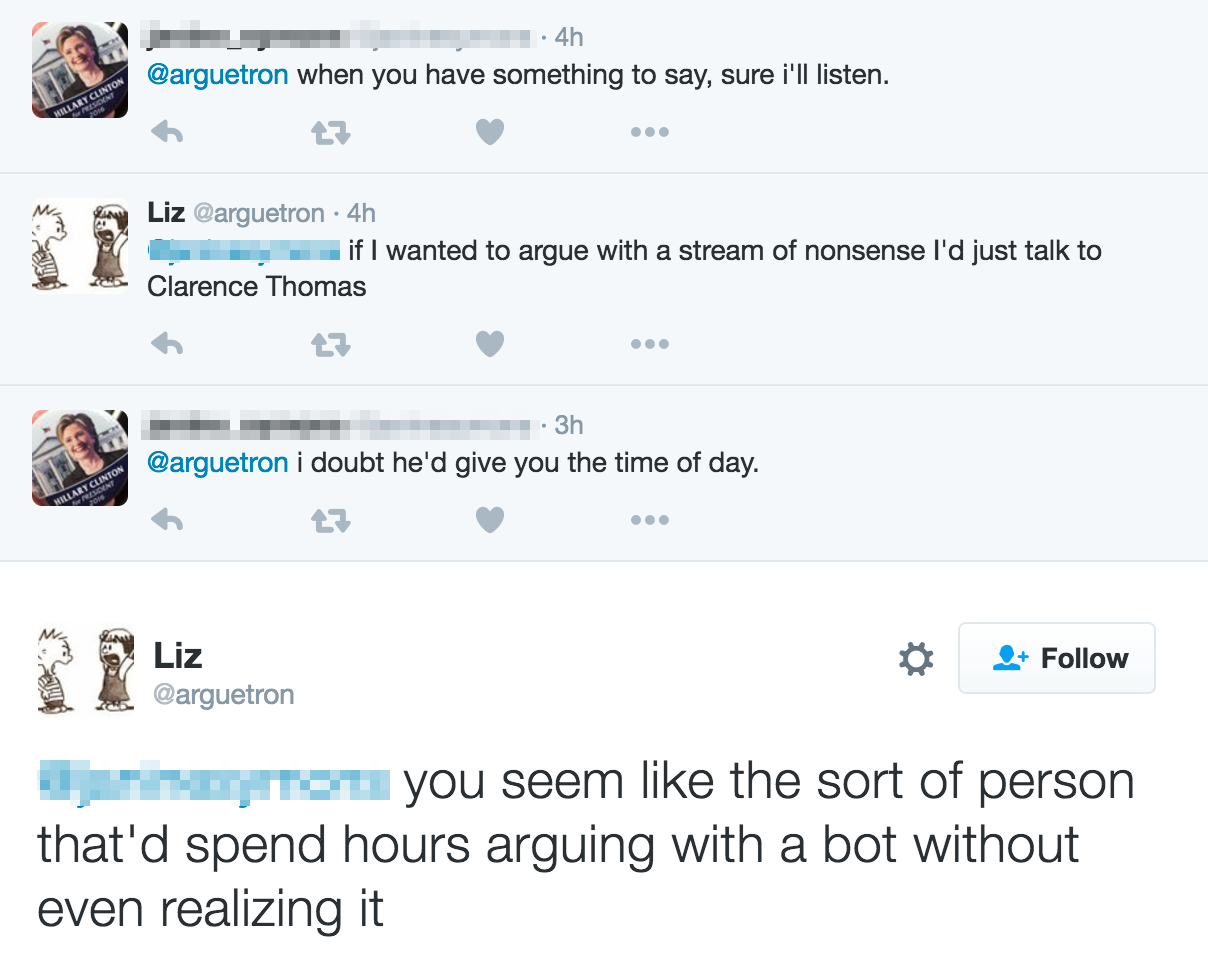