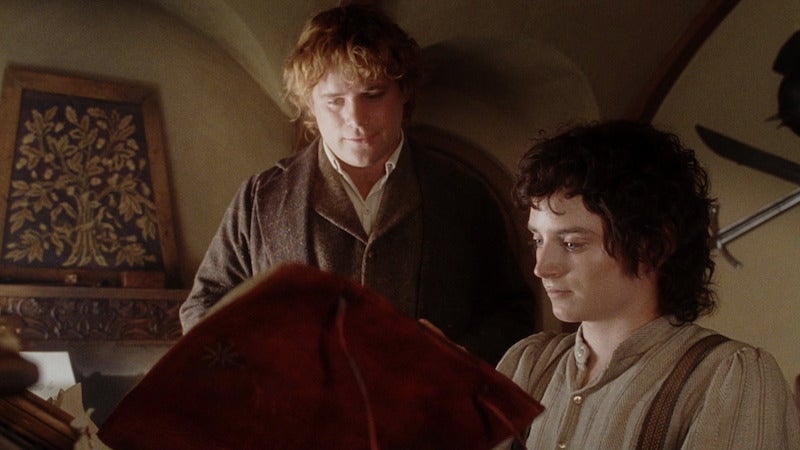 In 2017, you will finally be able to buy a copy of Beren and Lúthien, a story of old Middle-earth, written by none other than J.R.R. Tolkien himself. Or, you could go buy one of a half-dozen already published books that the story appears in later today. Your call! Image: Screencap from The Lord of the Rings: Return of the King

Beren and Lúthien are sort of the Romeo and Juliet of Middle-earth, in that it's a romance that everyone there knows. Except that — spoiler alert for a story that has been around for decades in many books — Beren and Lúthien don't stay dead. Also, Beren is a man and Lúthien an elf, which explains why Aragorn told a version of their story in The Lord of the Rings.

Tolkien wrote and rewrote Beren and Lúthien a bunch of times a bunch of different ways in the course of his life. The first version is was written as was The Tale of Tinúviel in 1917, and you can read it in The Book of Lost Tales. Then Tolkien wrote it as an unfinished epic poem called The Lay of Leithian, which you can read in The Lays of Beleriand. Tolkien's last attempt at telling the story is not epic poetry, but prose, and you can read that in The Silmarillion. Or you can read the Lord of the Rings and its appendix, since a) there's a version of the story in there, too, and b) Aragorn and Arwen's relationship is based on Beren and Lúthien's anyway.

If hunting down one (or all) of those books does not appeal to you, the new book release of Beren and Lúthien in 2017 will contain the first version, passages from Tolkien's other various attempts at the story, and illustrations by Alan Lee. Enjoy adding it to your never-ending collection of Middle-earth books edited by J.R.R.'s son Christopher, completionists.