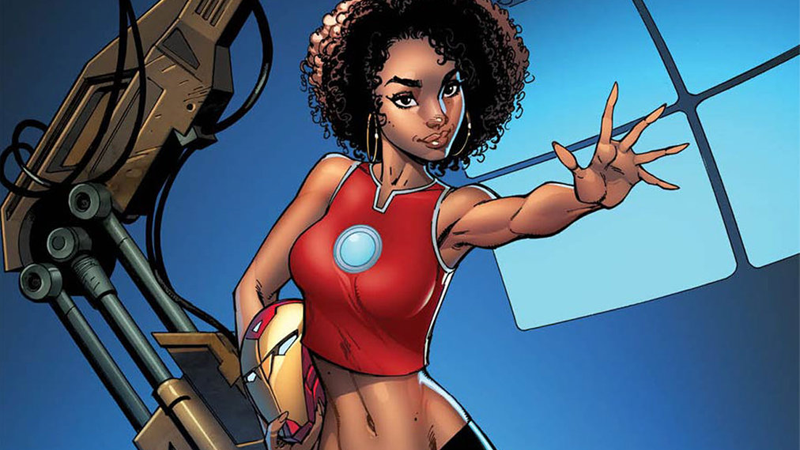 Pinup art has long been an unfortunate staple of variant comic covers depicting female heroes — but when that sexualized aesthetic starts getting applied to 15 year old teenage girls, it's not a good look for anyone involved.

Earlier this week, Marvel announced a slew of new variant covers for the relaunch of Invincible Iron Man — no longer starring Tony Stark as the Iron Avenger (for reasons made very clear in the comics world this week), but instead starring Riri Williams as Ironheart, the teenage African-American supergenius that's donned her own suit of armour in his stead. However, one stood out: a variant for Midtown Comics in New York City by J. Scott Campbell, in which not only was Riri's skin colour noticeably lightened in comparison to the artwork released from Invincible Iron Man, but she was also given an extremely sexualized body of a woman well beyond her actual age:

Is this how people see 15 year old black girls? I keep seeing these cover variants for Riri Williams and maybe 2 or 3 she has looked 15. pic.twitter.com/zlCGJ1maFt

These sort of covers are uncomfortable at the best of times in an industry trying to improve its relationship with female audiences — who make up nearly half of the audience buying comics — but it's especially gross to see a 15-year-old girl depicted in this manner. It's not the first time this has happened in comics, sadly (remember the criticism over the New 52 reboot of Teen Titans featuring a highly sexualized Wonder Girl on its cover?) but in what feels like the new era for teenage superheroes we're seeing in mainstream comics now, it's an incredible — and incredibly obvious — misstep.

Thankfully, after a furious reaction on social media yesterday, along with a frankly infuriating response from Campbell himself to the uproar, Marvel swiftly pulled the cover from sale. Even Invincible Iron Man writer Brian Michael Bendis decried the cover, while noting it was created outside of the purview of the series' creative team:

Specialty covers are not in my purview and it was being produced separately from the work of the people involved in making the comic. Not to pass the buck but that's the fact. If I had seen a sketch or something I would have voiced similar concerns. I am certain the next version will be amazing.

As long as the next version features a Riri Williams that looks like the teenage hero she is and not a pinup model — like their other female teen heroes, like Ms. Marvel or Luna Lafayette, have been drawn since their inceptions — it should be fine.