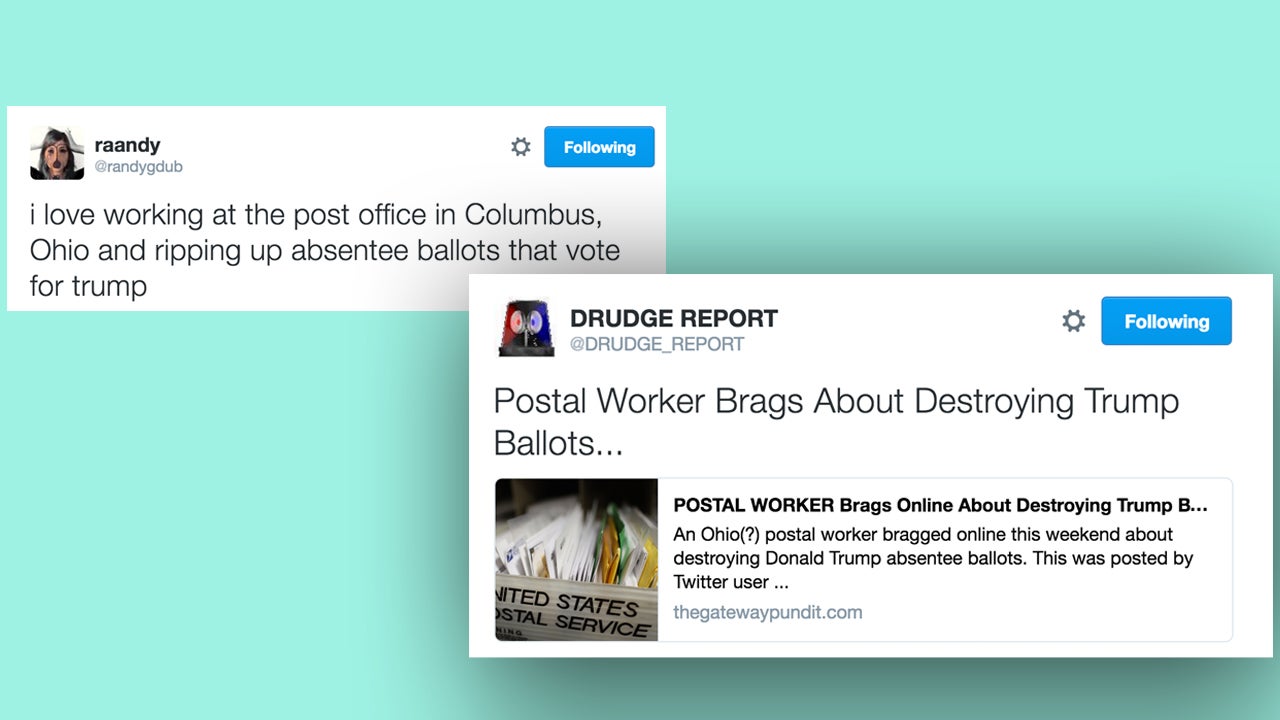 Twitter is a fun website because it's the perfect mix of news media, comedians, white nationalists and ISIS — meaning jokes, horrifying Pepe memes and actual pieces of breaking news share the same weight in your feed. Considering the conservative warriors of the alt-right have a penchant for trolling, you'd think that the conservative media would at least be able to distinguish a joke from a left-leaning account from a piece of actual news. But you'd be wrong. In the midst of Trump-induced hysteria about potential voter fraud, a jokester named Raandy tweeted:

i love working at the post office in Columbus, Ohio and ripping up absentee ballots that vote for trump

A deep-dive into the biographical information on Raandy's page reveal two things:

1. Raandy is "the cool and chill guy of online".

Here are some other definitely factual things Raandy has tweeted:

ladies please don't think 'locker room talk' is us men demeaning women. what we really do is make fun of the guys who aren't circumcised

i am a Black man for trump. that's right libs, we do exist pic.twitter.com/TXx9lX7kM4

The conservative media, nevertheless, had a field day with Raandy's tweet. Scott Baio quote-RT'd it. A blog called the Gateway Pundit wrote it up as fact, later adding an update that simply read: "So this Twitter user now says his tweet was a joke. Because voter fraud is funny? I've seen people get banned from Twitter for less than this." The Drudge Report — which got one billion views in May of this year — posted a link to the Gateway Pundit's blog.

I hope you get fired! Cheating is the only way she'll win. @realDonaldTrump Hey @JohnKasich is this okay with you? https://t.co/9mgk11KZHk

Rush Limbaugh also ranted about it on his show, saying (as transcribed by the Daily Beast, emphasis ours):

Let me ask you this. If a postal worker went on social media — I don't care what it was, Facebook Twitter, LinkedIn, Reddit, you name it — and was bragging about destroying Hillary absentee ballots, do you think they'd be trying to hunt this guy down and put him in jail with the guy who made the video about the started Benghazi. They wouldn't be stopping. They'd find this guy, they'd hunt him down, they'd give him to Marilyn Mosby and say "Have at it" ...
What happens when he opens one for Hillary? He's gotta reseal it, make it — I guess they don't care, it doesn't matter, as long as it says Hillary on it, the Democrats don't care. Could be postmarked from Mars, they will take it.

Even Ohio's Secretary of State Jon Husted tweeted out a response indicating he was taking Raandy's tweet seriously, warning, "if true, hold anyone guilty accountable". He sent that tweet out four hours after the USPS had issued a statement, saying it had "completed an initial investigation of the mentioned tweets and does not believe these tweets were made by a postal employee".

Gizmodo asked Raandy what he had learned from this experience. "Nothing," he wrote in a DM. "Really, I already knew conservative media was extremely stupid and the rubes who read it believe whatever they say."

Anyways Drudge, here's your next scandal:

new fakes are in. ready to make hillary president pic.twitter.com/Lw7xtC2j5x