Colonising The Moon Just Got A Lot More Dangerous 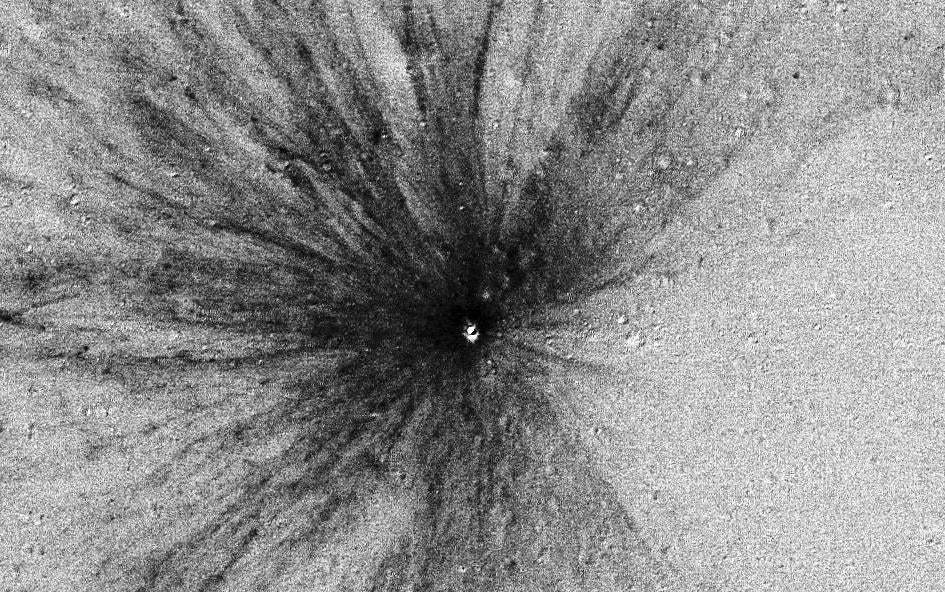 Bad news, would-be lunar colonists: That dusty, airless space rock you dream of escaping to is apparently swarming with deadly projectiles. According to a new study, Earth's nearest neighbour is being bombarded by small, fast-moving chunks of debris, at a rate 100 times faster than impact models previously estimated. Processed image showing debris flung far and wide from a lunar impact crater. Image: NASA/GSFC/ASU

That startling discovery came about through an analysis of images captured by the Lunar Reconnaissance Orbiter, a NASA-led mission that's been studying the Moon from orbit since 2009. Over the past seven years, the LRO's cameras have collected about a million high-resolution images of the Moon. While most of these photos do not overlap, about 14,000 of them do, allowing for detailed before-and-after comparisons.

Writing today in Nature, researchers at Arizona State and Cornell Universities used the LRO's image banks to identify 222 freshly-formed impact craters. Ranging in size from a few feet to over 42m wide, these craters tell the story of a world that's constantly being reworked by violent encounters with rogue objects in the cosmic neighbourhood."It's just something that's happening all the time," lead study author Emerson Speyerer told Nature News.

The team also observed 47,000 more subtle surface changes — markings that form when a meteorite punches out a crater and sends a wave of molten rock shooting across the surface at high speeds. These features, very scientifically dubbed "splotches", are tilling the upper few centimetres of the lunar regolith at an extraordinary rate, the result being that the entire surface gets a face-lift every 81,000 years or so. It's a strange thought, but when our distant ancestors gazed up at the Moon, the face they saw might have been subtly, but profoundly different from the one in our sky today.

This isn't the first time scientists have gotten excited about unusual levels of activity on the Moon. A study published in Nature a few years back also concluded that meteor showers are kicking up lunar dust at a higher rate than previously assumed, meaning that, sadly, the Apollo astronauts' iconic footprints will soon be rubbed away. With a growing body of evidence to support the idea that our nearest neighbour is basically the solar system's punching bag, those interested in mining the moon, or turning it into an overpriced holiday getaway, ought to start thinking carefully about how make their infrastructure bullet-proof. Otherwise, things are going to get ugly up there.