For over forty years, archaeologists have longed to peek inside a badly damaged ancient scroll found on the western shore of the Dead Sea. Now an international team of scientists has managed to do so by virtually unrolling the scroll, revealing the text hidden deep within: the first few verses from the book of Leviticus.

It’s a striking example of using advanced technologies to shed light on ancient secrets. The details are described in a new paper in Science Advances.”The En-Gedi scroll is proof positive that we can potentially recover the whole text from damaged material, not just a few letters or a speculative word,” lead author Brent Seales, of the University of Kentucky, said during a press conference yesterday.

The virtual unwrapping software package is called Volume Cartography, and it should be available sometime next year as open-source software. Because it is completely non-invasive, this new multi-stage approach could be a game changer in the analysis of fragile archaeological objects.

First, the team scanned the scroll using micro-computed tomography — a commercially available machine often used for cancer imaging. Then they used a process called segmentation to digitally create pages, followed by texturing and flattening techniques. Finally, they virtually “unrolled” the scroll to reveal the writing inside.

“We’re losing precious information about our history every day, not because we cannot decipher it, but because we can’t access it in the first place,” Phillipa Benson, managing editor of Science Advances, said. That’s because most analytic methods would damage or destroy these precious artifacts. “So many researchers have to choose between preserving the integrity of a physical artifact or extracting the knowledge it contains.”

First excavated in the 1970s, the scrolls were recovered from the ark of an ancient synagogue at En-Gedi (“spring of the goat”), the site of an ancient Jewish community that was destroyed by fire around 600 CE. The scrolls were far too badly damaged to permit any significant analysis. Honestly, although technically they are made of animal skin parchment, they’re pretty much just small lumps of charcoal to the naked eye, like this one: 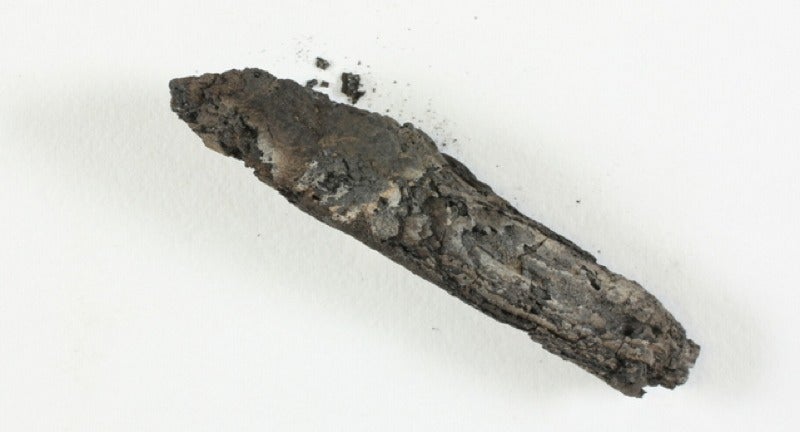 This lump of charcoal is actually one of the oldest known fragments of a biblical text, second only to the Dead Sea Scrolls. (Image: Shay Halevi/Israel Antiquities Authority)


But decades later, when she was selecting various unwrapped Dead Sea scrolls for scanning, Shor plucked one of the lumps out of the box to include in the scanning, just in case. And that was the only scroll that turned out to be significant in the batch, most likely because of the presence of metal in the ink.

But it still wasn’t possible to see what might be inside. That’s when Shor contacted Seales, an expert in advanced digitization techniques for examining damaged materials. “The magic — or secret sauce, if you will — is not in the scanning alone,” said Seales. His analysis combined digital scanning of a rolled-up object (like the En-Gedi scroll) with a series of imaging processing techniques that ultimately produce a flattened-out unrolled image of the interior layers.

They weren’t expecting to find actual, readable text, but they did. “Of course, we were elated,” said Seales when he first realised the markings were textual in nature. “But I think the real joy came when Pnina send me back the [analysis] results. Because then I knew that not only were we seeing writing, but it was readable, and she and her team were able to identify it as a known text. At that point we were absolutely jubilant.”

Appropriately enough, given that the scrolls were damaged by fire, the passage deals with burnt offerings.

“Never in our wildest dreams did we think that anything would come out of it,” Shor said. “The discovery of the text in the En-Gedi scroll absolutely astonished us. It was certainly a shot in the dark.”

The image quality is good enough that it was possible for Hebrew scholars to perform textual criticism.

“I think we can safely say that since the completion of the publication of the Corpus of Dead Sea Scrolls about a decade ago… the En-Gedi Leviticus Scroll is the most extensive and significant biblical text from antiquity that has come to light,” said co-author Michael Segal of Hebrew University in Jerusalem, who analysed the text from the resulting digital images. “We were amazed at the quality of the images. Much of the text is as close to readable as actual unharmed Dead Sea Scrolls.”

This text survived, Segal said, because the scroll was rolled in such a way that the opening verses were on the inner layers, protecting from being completely destroyed by that sixth century fire. The hope is that more of the text could be recovered over the next few months.

According to the textual analysis published by Segal and his colleague, Emmanuel Tov, today in the journal Textus, there are 18 lines of text in each column, containing all consonants and no vowels. For instance, “Kentucky” would have been written as “K-N-T-C-K” and the reader would fill in the vowels. “This means that the scroll was written before the ninth century, when the vowel signs were invented,” said Tov.

And the passages are identical, right down to paragraph breaks, to the so-called Masoeretic text — the most authoritative Jewish text, according to Segal and Tov, dating from the medieval period. Carbon dating further refines the time period as being from the second, third, or fourth centuries.

Seales and his colleagues are still working to virtually unwrap the outermost ayers of the En-Gedi scroll, although they are not optimistic since they are so badly damaged. In the future, Seales hopes to further refine his approach to image scrolls with other kinds of ink chemistries, as well as applications in forensic and intelligence gathering. “Damage and decay is the natural order of things, but you can see that sometimes you can absolutely pull a text back from the brink of loss,” he said.