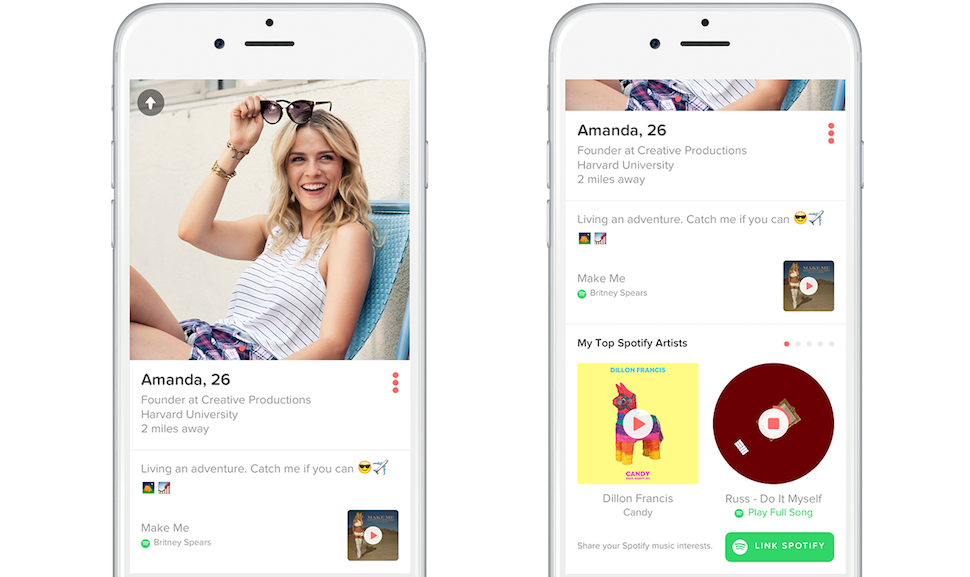 Music is an important indicator of a person’s character. I refuse to date anyone who regularly listens to Dave Matthews Band, for example, because Dave Matthews Band is terrible. But sometimes you don’t discover this important information until it’s too late, and then you’re stuck on a lame date with someone who has awful taste in music.

Beginning today, however, Tinder and Spotify will attempt to save us all from that nightmare scenario, because Tinder users will now be able to integrate their Spotify habits into their profile. They can pick their favourite musicians to display on their profile, and they will also be able to see which ones they have in common with other connected singletons (or people cheating on their spouses). When a man who listens solely to the Spice Girls pops up, please tell me, because I would like to marry him.

The partnership also includes a feature called the “Anthem”, which Spotify describes in very lofty and slightly cringeworthy terms: “It’s that one single track that tells your story. That one song you can’t get out of your head. Where the lyrics of your life meet the rhythm of your soul.” Users can slap this “anthem” on their profiles, and other people, with or without a Spotify account, can listen to snippets. (You can add this “anthem” even if you don’t have a Spotify account.)

Back in June, when Tinder competitor Bumble added Spotify integration, I cheered and begged that every dating service add something similar. And now, lo and behold, Tinder has joined the party. Thank you, dating apps, for making the partner selection process even easier.

Seriously, though, stop listening to the Dave Matthews Band. They suck.