This Wi-Fi Can Tell If You’re Sad

Our modern environment is saturated with wireless signals, a consequence of our insatiable desire to transmit data seamlessly and efficiently. A new device developed by scientists at MIT’s Computer Science and Artificial Intelligence Laboratory (CSAIL) can use these ubiquitous signals to detect our inner emotional states.

The “EQ-Radio” device bounces wireless signals off a person’s body to capture subtle changes in breathing and heart rhythms. And it doesn’t require any on-body sensors or facial-recognition software. In tests, the system proved nearly 90 per cent accurate when assessing how these physiological changes corresponded to four specific emotional states: Happy, excited, angry and sad.

“When the heart pumps the blood, it exerts a force on the rest of the body,” said Mingmin Zhao, a graduate student student at CSAIL and a co-author of the new study. “This causes jitters in the head, the skin and other body parts.” Zhao says these jitters are synchronised with the heart beat, and that the EQ-Radio is able to sense very minute motion associated with these jitters.

When we move our bodies around a room, it interacts with the wireless signals around us. EQ-Radio collects these reflected signals, and then studies the waveforms within each recorded heartbeat, the better to match a person’s mood to how they previously acted in one of the four emotion-states. For example, a particular reading of low physical arousal indicates sadness, while a heightened state of arousal signifies excitement. The device measures heartbeats as accurately as an ECG monitor, and with a margin of error of about 0.3 per cent

The MIT team used a machine-learning algorithm to learn which physical states corresponded to which moods. Granted, these correlations aren’t the same for everyone (we all exhibit different physiological states according to our mood), so the system had to be “taught” to identify each person’s distinct emotional signatures. For the study, the researchers examined 30 participants, collecting over 130,000 heart beats. 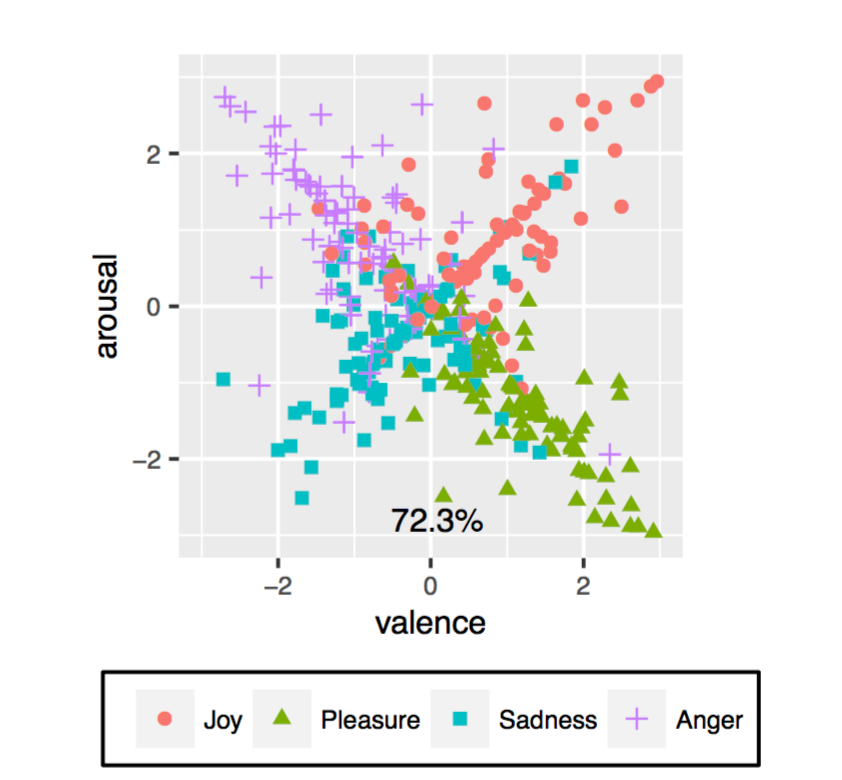 “To train the system, we asked subjects to evoke particular emotions by recalling a memory, and they could use use music or photos to help,” Zhao told Gizmodo. “Once we had our training data, we then asked each subject to evoke a new spontaneous memory, which is what we tested the system on.”

The system zooms in on the signal reflected off the body of a particular person, while ignoring reflections from other things in the room, including objects and other people moving about. From those reflections it is possible to infer the subject’s breathing and heart rates.

The EQ Radio uses the same carrier frequency as Wi-Fi, but with considerably less power — about 1000 times less power, to be exact. Conceivably, this system could be integrated within an existing wireless router, or any other device that transmits and receives wireless signals.

Film studios or game designers could use the technology to learn how people react to a movie or game. Or, it could work alongside a video game, customising the on-screen experience according to the mood of the player. The device could also be integrated into smart homes, adjusting the music, lighting and other interior aspects as desired. Healthcare practitioners could track a patient’s cardiovascular health, or monitor their emotional wellbeing.

Given all these potential uses, the researchers have necessarily been concerned with privacy. To that end, they have integrated a common software security feature into the system known as “challenge response”.

“Privacy is very important to us with the technology,” said Zhao. “We have designed a mechanism for the device to check that the person agrees to being monitored. In particular, in order to monitor a person, the device first asks that the person performs a sequence of actions (e.g., take a very deep breath three times). If the person does not perform the action, the device does not monitor him/her.”

The MIT CSAIL team, led by professor Dina Katabi, will present this work next month at the Association of Computing Machinery’s International Conference on Mobile Computing and Networking (MobiCom).