Autonomous vehicle technology is still in its infancy, which means that most self-driving vehicles still have a way for humans to take over when needed. But as Komatsu demonstrates with a design for a new autonomous dump truck, in some cases there are real advantages to eliminating humans altogether.

In a massive strip mine there are no people walking around and very few hazards, so the need for a backup driver in a vehicle that’s continually retracing the same route all day long is unnecessary. Back in 2008, Komatsu actually started testing self-driving mining vehicles, but they were conventional trucks upgraded with autonomous capabilities, which meant they still had a cab for a driver to ride along. 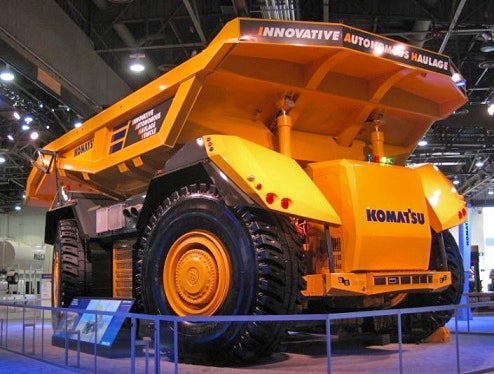 The latest version of its Autonomous Haulage System dump truck, however, was designed from the ground up to be completely autonomous. As you can see, there’s no longer a driver’s cab.

In fact, aside from the direction the dumping bed raises, the self-driving truck doesn’t really have a front or back. It can drive in either direction equally well thanks to four-wheel steering, which in turn means a strip mine doesn’t need to allocate space for one of the massive vehicles to turn around after each trip so a driver can see where they’re going. It can simply shuttle back and forth, reversing direction as needed.

The other advantage to being able to operate in either direction is that Komatsu was able to design the new autonomous truck so that weight was evenly distributed between all four wheels, allowing it to maximise its payload — over 250 tonnes — which in turn means less trips back and forth to be emptied.

There’s no word on when Komatsu plans to deliver the newest member of its Autonomous Haulage System, but if it means improved efficiency and vehicles that never have to stop so drivers can use the washroom or sleep, it’s safe to assume mining companies will be lining up to add these to their fleets.