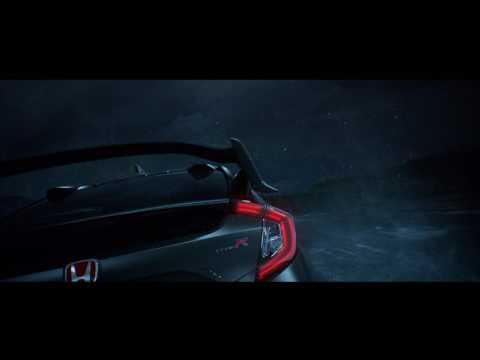 Feast your eyes on this. The new Honda Civic Type R — prototype — has broken cover at the Paris Auto Show, and it looks incredible. With the most aggressive, balls-to-the-wall body kit that we’ve seen on a road-going car for a long time, the Type R looks like a true spiritual successor to the Type Rs of yore — DC2R Integras and EP3 Civics that could drive to work and back during the week and then carve up the track on the weekend. This is just a prototype, but here’s hoping it transforms into a production car we’ll be able to buy in Australia.

The massive rear wing is only one element that sets the Type R apart from a regular road-going Civic, but the first thing we noticed was the beautiful matte grey aluminium wrap that this particular car is clothed in — it looks awesome. Carbon fibre side skirts and rear diffuser surround the base of the CTR, and three “fully functional” tailpipes — on a four cylinder engine? — are centre-mounted around the back. It sits on some pretty wide 245-section rubber on all four corners, too, wrapping 20-inch piano black rims with red accents — the same red that fills the Honda H badge on the front bonnet and rear bootlid.

Just look at it, though. This is a fun car, in everything from the Fast & Furious bonnet scoop to the oversized honeycomb mesh grilles and massive lighting setup around the front and back. And the wing, man — the wing. Along with those vortex generators above the rear window, this is one mean looking hatchback. We’d go so far as to say that even if it’s toned down a bit before it reaches production, it’ll probably be the most race-car-esque four-door hatch that money can buy — at least in looks.

We’ll know more concrete details about the Type R’s drivetrain (important) and suspension setup (more important) when it’s officially unveiled some time next year, but we have our fingers massively crossed that it makes its way to Australia reasonably quickly. Sales in Europe are expected towards the second half of 2017. Previous Type-Rs have filled a niche in the same class as bonkers hot hatches like the Focus RS and WRX STI, meaning they’re ridiculously fun without entirely crippling your bank account until the end of time.