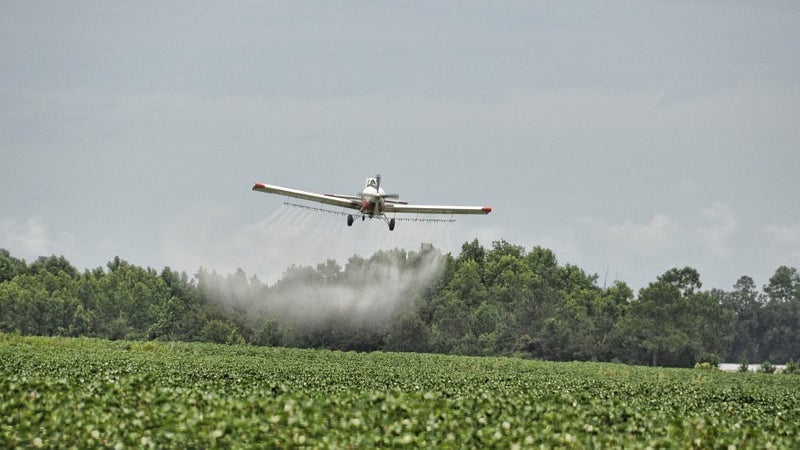 To prevent Zika-infected mosquitoes from taking root in South Carolina, officials in Dorchester County gave the go-ahead to spray a powerful insecticide over the countryside. The effort resulted in the unexpected deaths of millions of bees at a time when these critical pollinators are struggling worldwide.

As reported in the Washington Post, parts of Dorchester County were sprayed on Sunday morning with a common pesticide, called Naled, that kills mosquitoes on contact. Unfortunately, it does the exact same thing to bees. Normally, this pesticide is sprayed by trucks, but given the urgency surrounding Zika, county officials decided, in their infinite wisdom, to spray Naled from the air — something that had never been done before in South Carolina.

The spraying commenced at 6:30AM local time on Sunday morning. Local residents were warned prior via a newspaper announcement and a Facebook post the day before (the pesticide is not harmful to humans, but experts say contact should be avoided nonetheless). Effects of the spray were felt by the bees almost instantly.

In one case, a single apiary in Summerville lost 46 hives, destroying about 2.5 million bees in the process. Residents described clumps upon clumps of dead bees littering the farms, with one beekeeper saying her apiary “looks like it’s been nuked”. Writing on Facebook, another farmer wrote, it “was visiting a cemetery, pure sadness”.

Adding insult to injury, the spraying came during a particularly vulnerable time for the bees. When weather is hot, like it was last Sunday, bees collect outside the hives to stay cool. Consequently, many farmers hadn’t covered their hives as a precaution.

Dorchester County officials acknowledged the bee deaths in a statement, writing it’s “aware that some beekeepers in the area that was sprayed on Sunday lost their beehives”. One county administrator was quoted as saying, “I am not pleased that so many bees were killed.”

Speaking to a Charleston WCSC-TV reporter, beekeeper Juanita Stanley said, “Had I known, I would have been camping on the steps doing whatever I had to do screaming, ‘No you can’t do this,'” adding that she’s more devastated by the loss of her bees than the honey.

It’s not immediately clear if the beekeepers will be compensated for their losses, but at least one Summerville resident has started a change.org petition calling for an immediate halt to aerial spraying of Naled.

Sadly, this incident comes at time when bee populations are struggling around the world. In recent years, experts and beekeepers have observed dramatic decreases in their numbers. This is a serious problem given that about 75 per cent of the crop species around the world need to be pollinated in order to grow seeds and reproduce. Bees aren’t the only pollinators, but they pollinate the majority of crops. No one’s entirely sure why bees are on the decline, though pesticides have been implicated as a major cause.

As a final note, it’s worth pointing out that no one in South Carolina has contracted Zika from a mosquito, though several dozen cases of travel-related Zika have been recorded in the state.