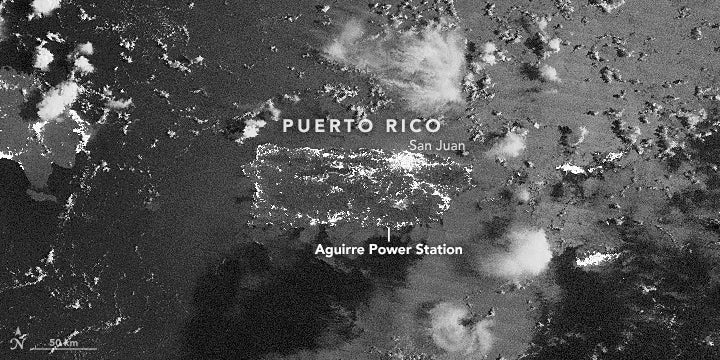 Earlier this week, a fire at a power plant in Puerto Rico set off a series of failures across the island’s ageing electrical grid. These before-and-after pics from space show what it looks like when 1.5 million customers suddenly lose power.

Satellite pics show Puerto Rico both before and after the black out.

These nighttime satellite images were captured by the Visible Infrared Imaging Radiometer Suite (VIIRS) on the Suomi NPP satellite. The “before” pic was taken the day before the blackout, on September 21 at 2:50AM, and the “after” pic was taken on September 22 at 2:31AM. The ocean surface looks brighter in the second image due to different angles of moonlight on the water. 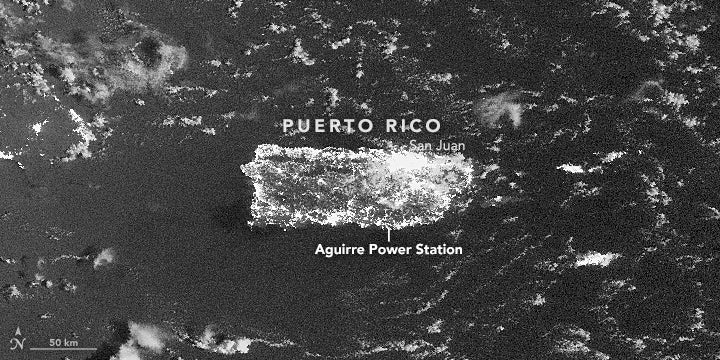 The fire at the Aguirre power plant occurred after a power switch overheated, causing a 8000L mineral oil tank to explode. This triggered a fire across a three-acre area. The resulting blackout caused widespread losses of water and air conditioning, as well as school closures.

A state of emergency has been declared in Puerto Rico, and the island’s 3.5 million inhabitants just faced their second night of darkness. As of yesterday, only about 20 per cent of the 1.5 million homes and business had gotten power back. A pair of 230,000-volt transmission lines failed for reasons unknown, which further complicates the situation.

It’s not clear when full power will be restored, or how much damage the fire caused. It’s also unclear as to where the Electric Power Authority will acquire the funds needed to repair and buy new equipment. Puerto Rico is currently in the midst of a decade-long economic slump, and its power company is dealing with $US9 billion ($11.8 billion) worth of debt and an onslaught of corruption allegations.

This is not a good situation.