Our Best Glimpse Yet Of A Disintegrating Comet 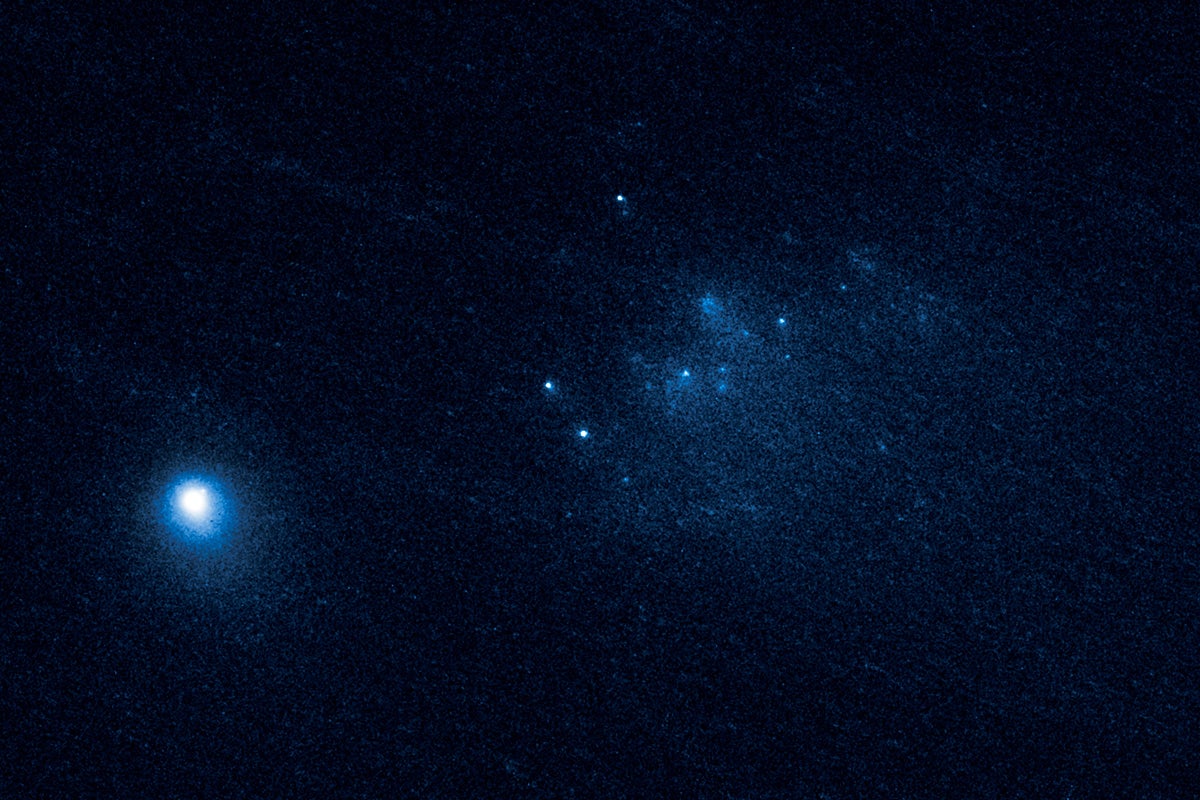 Astronomers working with the Hubble Space Telescope have captured unprecedented images of a comet in the process of disintegration. It’s our clearest view yet of this celestial phenomenon in action.

An animation showing the comet (the bright glow at bottom left) and its fragments (center-right). (Credit: NASA, ESA, and D. Jewitt (UCLA))

Comet 332P/Ikeya-Murakami, or simply Comet 332P, was 100 million kilometres from Earth when the observations were made, and just 240 million kilometres from the sun. Taken over three days in January of this year, the images show about two dozen building-sized chunks of ice and dust slowly drifting away from the comet’s nucleus. Based on these observations, this 4.5 billion-year-old comet — which is as old as the Earth itself — has about 150 years left before it’s completely obliterated.

These images are a beautiful illustration of what happens to a comet when it ventures too close to the sun and starts to vaporise. Intense sunlight has heated up the comet, causing jets of gas and dust to burst out from its surface. The nucleus of this comet is quite small, so these jets are acting like rocket engines, making the comet spin faster and faster. This rapid rotation is forcing chunks of cometary material to loosen and dislodge. The debris from Comet 332P is now scattered along a 5000km-long trail, which is longer than the width of Australia.

“We know that comets sometimes disintegrate, but we don’t know much about why or how they come apart,” explained lead researcher David Jewitt of the University of California at Los Angeles, in a statement. “The trouble is that it happens quickly and without warning, and so we don’t have much chance to get useful data. With Hubble’s fantastic resolution, not only do we see really tiny, faint bits of the comet, but we can watch them change from day to day. And that has allowed us to make the best measurements ever obtained on such an object.”

These cometary shards, which range in size from about 20m to 60m wide, constitute about four per cent of the total size of the parent section, and are moving away from each other at just a few kilometres per hour. The new observations show that cometary disintegration is far more complex and dynamic than previously thought.

“In the past, astronomers thought that comets die when they are warmed by sunlight, causing their ices to simply vaporise away,” noted Jewitt said. “Either nothing would be left over or there would be a dead hulk of material where an active comet used to be. But it’s starting to look like fragmentation may be more important. In Comet 332P we may be seeing a comet fragmenting itself into oblivion.”

The researchers estimate that the comet can survive another 25 outbursts. So at a rate of one episode every six years — the time it takes Comet 332P to revolve around the sun — that means it will be completely gone in 150 years. By the larger scheme of things, that’s a cosmological blink of the eye.