How To Calibrate Your TV And Make It Look Better 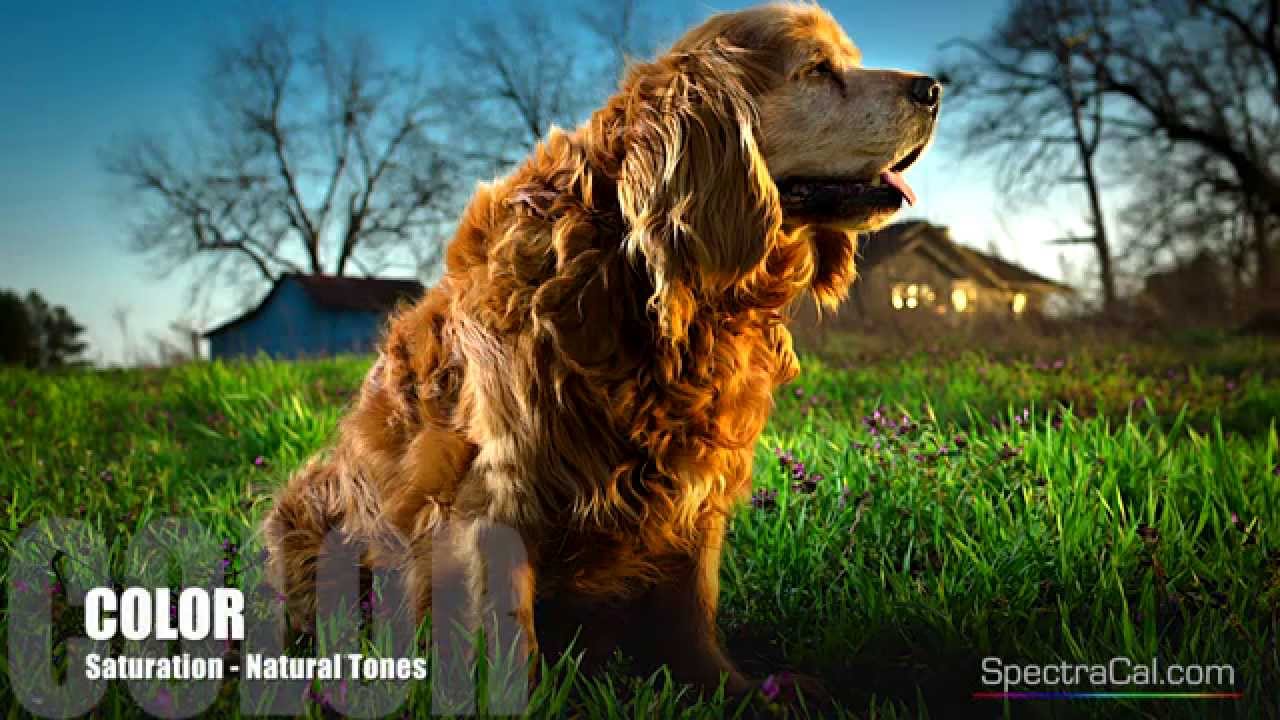 So you’ve just bought a new TV. Maybe it’s a cheap one that you picked up at Aldi. Maybe you got a great deal on a really expensive one from your mate at the hi-fi shop. Either way, the second you set it up, there are a few small tweaks that you can do to make it look better than it already does. You can spend zero dollars on this or you can spend a couple of hundred, but the result that you get will be a noticeable improvement.

Watch the video above for an idea of the difference that calibration can make. But here’s the thing — you’re looking at that on an (almost certainly) uncalibrated screen, so the differences you see aren’t so obvious. After calibrating your screen, you can expect a better picture, but that picture is just one that has more detail in it. It won’t necessarily be brighter or more saturated or sharper, but it will be more accurate in every one of these metrics.

1. The Cheapest Way: Just Guess It

So, this is what most of you will probably be doing with your new TV, no matter how expensive it is. The vast majority of TV buyers out there will unpack their new screen, attach its stand and set it up and plug it in, then do… nothing. Straight out of the box, your TV will look OK — standard screen profiles are actually surprisingly decent these days — but a little bit of tweaking in your screen’s picture can go a long way.

In stores, TVs are almost always set to a specialised Shop mode that pushes brightness way through the roof, almost always pushing colours — especially blues and reds — to the point of over-saturation and crushing, and throws contrast way off to destroy fine image detail in both highlights and shadowy areas. Under harsh fluorescent shop lighting, and against competitor TVs doing exactly the same thing, this looks good (for a certain value of the word good) but it’s not at all representative of what your TV should look like.

Here are a few basic rules you should follow to ensure you get the best possible picture from your TV — albeit without any tools to confirm that those results are the right ones. This is intentionally vague, because from LCD to LED to plasma to OLED, there is a huge gamut of screen types and basic calibrations out there. If you don’t want to bother with any of this, just find the Cinema mode in your TV’s settings and leave it switched on.

As a general rule, your screen’s brightness will be set slightly too high. If you own a LCD, your TV’s Brightness setting actually adjusts the value of its (lowest) black display level, not the (highest) white. If you lower it by just a couple of notches, you’ll notice that the black background on your videos disappears a little more, making overall black levels a little more impressive. This is one thing that you’ll notice a lot, especially with cinematic content with a thinner aspect ratio, where the ‘black’ border of the video looks grey against the rest of the screen, so lowering brightness is a good starting point.

As a general rule, your TV’s white balance will be set too far towards the cool end of the colour spectrum, making whites look bluer than they should. I’ve found almost universally that pushing a TV’s screen slightly towards the warmer end of the spectrum — or just to Warm if you only have a few basic options to choose from — will give you the most colour-accurate, daylight-white picture. If you have a spectrum of settings to choose from, a slight bias to warm whites is generally a good place to start.

As a general rule, your TV’s contrast will be set too high, destroying information towards the extreme low and high ends of the black/white tone scale and the extreme ends of any colour’s saturation. After you’ve adjusted brightness, lowering contrast slightly as well will usually extend the range of detail you’ll be able to discern in especially bright, dark or saturated areas of your TV’s display. Don’t go too far or you’ll start to make whites and blacks look grey, but you want to achieve a perfect bright white and a perfect dark black while still maximising detail at every point in between.

As a general rule, sharpness will be too high as well. Excessive sharpness can create halos on the edges of high contrast objects and destroy detail. This is a hard one to eyeball, but if I’m just doing a quick and dirty clean-up on a TV I’ll back off sharpness entirely — all the way back to zero — and then slowly increase it until I’ve found what looks like the natural point for the display, with crisp delineation between high contrast edges but without that halo effect that makes colours bleed over into neighboring pixels.

And, yes, as a general rule most TVs these days include some kind of motion interpolation or frame smoothing feature that makes cinematic video look a little less jerky and jittery. On a case by case basis, it’s up to you whether you turn this off or whether you leave it enabled. Personally, I’ll find a middle ground that removes stuttery jitter but that doesn’t turn everything into a soap opera. Experiment on your own screen with a bunch of different TV and movies, see what you like, and be happy with what you’ve picked.

At the end of this, you’ll likely have a picture that looks less punchy than the settings it came out of the box with. But that’s OK. That’s actually what you want with a calibrated display. You’ll be able to see a lot more detail than you could before, with colours that aren’t garish and skin tones that aren’t cartoonish and a video output that isn’t ridiculously sharp to the point of being grainy. There should be a small but appreciable difference between the out-of-the-box standard settings and your eyeballed calibration.

If you have a smartphone or a tablet, you should buy one of these media streamers. They’re both awesome, and for the price the amount of streaming video, music and other media that they allow you access to they’re an absolute bargain. One thing that they can do, too, is calibrate your TV a little better than your own eyeballs can, with the help of an app called THX Tune-Up.

It’s a one-size-fits-all solution, but that’s because it works. If you have Google Chromecast dongle, or if you have a fourth-generation Apple TV, you can download the THX Tune-Up app for iOS or Android and mirror it to your screen using Google Cast or AirPlay depending on the platform you’re using.

Using the THX Tune-Up app, you can ensure that your TV is displaying content — on the Chromecast or Apple TV’s HDMI input, at least, although you should be able to translate those settings to all inputs — in the correct aspect ratio and with no overscan, and have a more accurate eyeball test to maximise the range of highlight and shadow information visible on-screen simultaneously, and to ensure your TV’s colours are as saturated as possible without crushing.

Similarly, you’ll be able to check tint to ensure that skin tones aren’t too green or too red. The app uses your iPhone or iPad or Android device’s camera, too, to see how good your results are — like a low-budget colorimeter. It’s not the most accurate solution available by a long way, but it’s better than guessing.

I haven’t bothered to use the audio calibration on the THX app, but it’s there too if you want it.

3. The Expensive Way: A Colorimeter

For the last five years, I’ve been calibrating my TVs using a pretty straightforward image calibration setup. I have a i1 Display Pro calibration colorimeter from X-Rite, which I hook up to my Surface tablet to run the necessary i1Profiler software that displays the raw data output that the colorimeter captures.

On top of that, I use my Oppo BDP-103 Blu-ray player to play the Spears & Munsil HD Benchmark calibration disc, which contains dozens of different image patterns to accurately test and tweak image contrast, sharpness, and every colour in the visible spectrum. With that disc and the colorimeter, you can check that your TV is displaying every pixel accurately, and

The important thing with do-it-yourself calibration is to use a platform that’s trusted and easily repeatable. I know that the Oppo doesn’t apply unnecessary image sharpening and colour and contrast enhancement on one of its two HDMI outputs, so I’m getting a true representation of the Spears & Munsil test patterns through the TV for the colorimeter to measure.

Here’s the thing though — using a colorimeter requires a lot of free time and a lot of practice, because you will muck it up if you’re new. If you do go down this route, be prepared to reset your TV to its default settings a few times as you learn along the way. I won’t explain it all here except to say that if you buy a colorimeter and calibration disc, read everything about them. Over and over again.

4. The Most Expensive Way: Hire An Expert

If you find this whole process a little too confronting to undertake yourself, or if you don’t have the free time to spend tweaking settings, or if you want the absolute best picture possible from your TV — no matter its price — then you’ll want to hire an expert.

A professional screen calibrator will likely have certification from ISF or THX, and will have undertaken a course or courses and have the best equipment possible — itself calibrated to exacting standards — to get the most out of your display.

To get the most out of a professional calibration, you’ll need to have a display that has ISF calibration modes — ideally one for day and one for night viewing — and a bunch of other useful features like multiple white-balance calibration points and independent red-green-blue hue and saturation values, potentially a couple of each for high and low values. There’s a lot going on behind the scenes of a TV that can be altered, especially on a high-end panel — so these are honestly best left to an expert.

There isn’t a single database of certified screen calibrators in Australia, so it’s a good idea to jump on Google and do some searching, or to check in with your TV’s local distributor or a nearby hi-fi shop to see if there’s someone they can recommend.