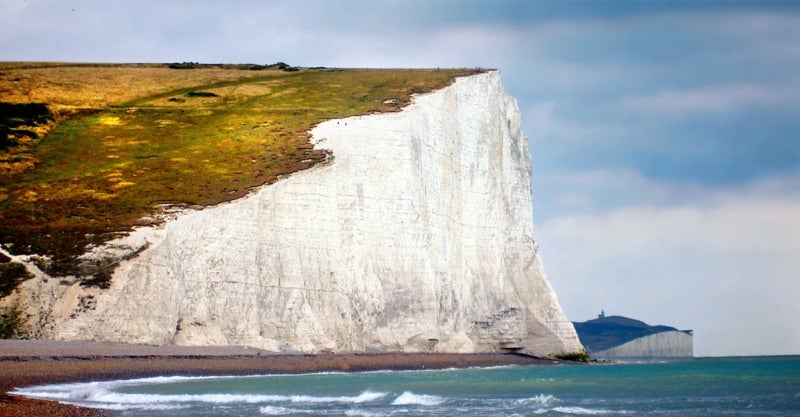 England’s famed White Cliffs of Dover were formed almost 100 million years ago out of the crushed shells of tiny single-celled algae. Now a team of scientists has identified the specific ocean conditions necessary for these sea creatures to thrive.

Standing 100m tall and running 16km along the cost of the English Channel, the cliffs are primarily made of soft, fine-grained white chalk, with traces of flint and quartz. It’s what gives them their distinctive white hue. That chalk in turn is made up of plates of calcium carbonate, or coccoliths — the remains of coccolithophores, tiny algae whose skeletons sank to the bottom of the ocean floor millions of years ago. The cliffs were thrust up out of the ocean thanks to movement of the Earth’s crust.

But under what conditions are these algae likely to bloom and thrive? According to a new study published in Global Biogeochemical Cycles, it all comes down to the relative abundances of nitrate, silicate and iron. That conclusion is based upon new data collected from two research cruises: One in 2011 running between the Patagonian Shelf and Cape Town, South Africa and the second running between Durban, South Africa and Freemantle, Australia in 2012.

That’s the location of the Southern Ocean’s Great Calcite Belt, where coccolithophores bloom every year, producing a ring of bright reflected light.

In the ocean waters of the southern hemisphere, coccolithophores compete with other kinds of algae, such as large diatoms, which need large amounts of silicate to build their glassy shells. So they beat out the coccolithophores in areas particularly rich in silicate, the new study found. The coccolithophores thrive in areas rich in nitrate and relatively low in iron — another key nutrient for diatoms.

So are we going to see impressive white cliffs rising from the depths of the sea once again some day? It’s hard to say, according to lead author William Balch of the Bigelow Laboratory for Ocean Sciences in Maine. But last year a team of Australian scientists discovered sediments directly under the Great Calcite Belt that had particularly high levels of calcite. “While we don’t have the great cliffs of the Southern Ocean, there is solid evidence that the calcite is making it to the sea floor,” Balch said in a statement.

And if it keeps building up over the course of millions of years, future inhabitants of Earth could have their own natural geologic wonder to replace the White Cliffs of Dover, which very likely will have eroded away by then.