Ghost Rider May Be Exactly What Agents Of SHIELD Needed 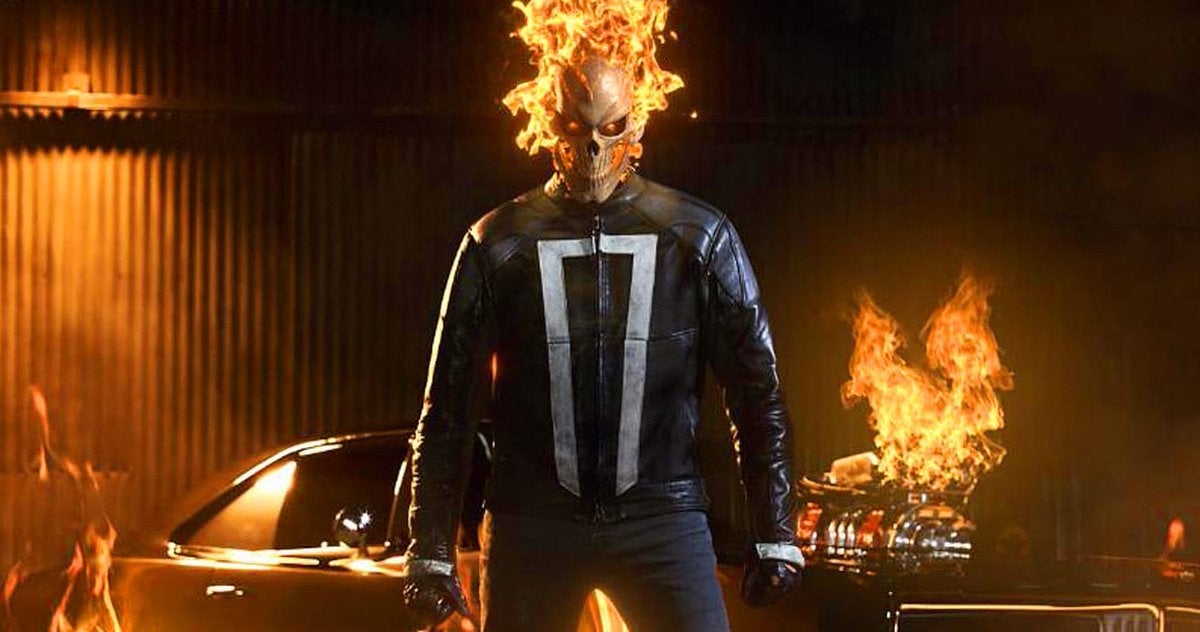 Agents of SHIELD has never been a show that’s hesitated to shake up its status quo, and Agent Coulson and his team had yet another when season four premiered last night — and it’s not for the better. But the real change comes from the addition of the first (reasonably) major Marvel superhero, Ghost Rider, to the series. He’s brought new life to the show — not bad for an undead spirit of vengeance.

The main problem with season four is that the show has decided to separate all of its main characters yet again. While I like that SHIELD has returned to being a well-staffed, well-funded government agency again after going to hell in Captain America: The Winter Soldier — and I also like the fact that Coulson is no longer the director, because it’s more fun when he gets out in the field — it’s actually aggravating to know we’re going to have to wait umpteen episodes before the gang eventually, inevitably gets back together. For now, Coulson and Mack are running missions, Melinda May is training her own strike team back at SHIELD HQ, Fitz is in the science lab, Gemma is now a liaison to the mysterious new Director, Yoyo is hanging around L.A., and Daisy, as we saw in last season’s finale, is for some reason running around as an outlaw/vigilante/hacker fighting crime, avoiding SHIELD in general and Coulson in particular.

So most of the excitement of the episode comes from the arrival of Ghost Rider, whose flaming ’67 Charger is as awesome-looking as his very silly 1980s heavy metal album cover skull is not. To be fair, the very stylised skull is to set the new Ghost Rider, a.k.a. Robbie Reyes, apart from the better known Johnny Blaze/Ghost Rider of the movies. If you have read our primer on the character, this new Ghost Rider is much more interesting than the movie version, even if at the moment he’s basically Punisher with a car, murdering bad guys for being bad. Reyes seems to have accepted his fate as opposed to railing against it, which avoids the all-too-expected conflict with the character, but he also has a disabled younger brother to care for, giving him some real, visible stakes. (And if you read the primer, you know how Reyes became Ghost Rider has a much more intriguing twist than normal G.R., too.)

There are a few other storyarcs introduced in this episode that are varying degrees of interesting: The skeevy Dr. Radcliffe has created Aida, an A.I. with a very nude physical body, which is presumably a Life Model Decoy, as teased in last season’s finale. Right now, she’s every generic AI-in-a-human-body trope, but I have hopes that she means more Life Model Decoys are on the way, which could lead to some very interesting drama. (If a LMD of Grant Ward, progammed to be “good” again, doesn’t eventually show up to make everyone vastly uncomfortable I will be extremely disappointed.)

More importantly, there’s a ghost running around that seems to drive people insane with rage, causing them to kill everyone around them — and, most notably, cause the infected to see others’ eyes are being dark, shadow-y holes, not unlike Mads Mikkelsen and his cronies in the upcoming Dr. Strange movie. May’s infected, because AoS can’t possibly function unless one team member is working actively against the rest.

We’ve heard that this season of SHIELD will connect to Dr. Strange, and it’s safe to say this is it. (Although, as usual, the chances of Dr. Strange being affected by anything that happens in AoS are of course practically nonexistent.) After several seasons of Inhumans and Hydra drama, I greatly look forward to seeing the SHIELD team try to take on the supernatural, something new, and something they aren’t even slightly equipped for. I just wish I didn’t have to wait for them to become a team again.