An incredible 19,000 light years away, in the Sagittarius constellation, lies a brilliant star cluster unlike any other. A new analysis indicates that Terzan 5 is a “fossil relic” from the formation of the Milky Way — and it could help us piece together our cosmic origin story.

Terzan 5, a stellar cluster with an unusual mix of stars that indicates it was a primordial building block of the Milky Way. All Images: ESO/F. Ferraro

For 40 years, Terzan 5 was taken for a globular cluster, a brilliant region of gravitationally-bound space that packs thousands of stars into the distance between our Sun and Alpha Centauri. But after scouring data on this patch of sky collected with the European Southern Observatory’s Very Large Telescope and space-based companions, an Italian-led team of astronomers has learned it’s like no globular cluster ever studied before.

Globular clusters are ancient — nearly as old as the galaxy itself — and their stars tend to form in a single, brief burst of cosmic time. Terzan 5, however, contains two distinct populations of stars. The dominant population formed some 12 billion years ago, consistent with the age of most known globular clusters. But a second population didn’t form until seven billion years later, around the same time as our Sun.

The higher metal content of the younger generation indicates these stars were polluted with heavy elements generated during supernovae explosions from the older generation. “No genuine globular cluster was able to retain the gas ejected by supernovae,” lead study author Francesco Ferraro told Gizmodo in an email. 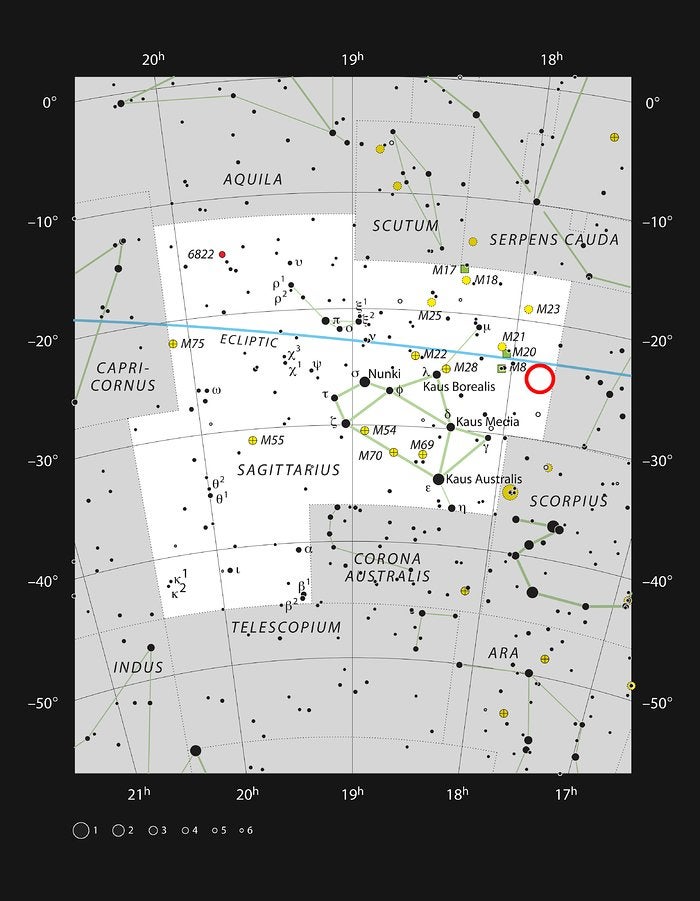 Location of the Terzan 5 cluster in the constellation Sagittarius. Image: ESO/IAU and Sky & Telescope

As Ferraro and his colleagues write in a new scientific paper, this unusual situation makes Terzan 5 an ideal representative of a key stage in the formation of our galaxy and many others — the assembly of a densely packed, central core known as the “galactic bulge”.

Theory indicates that the formation of the Milky Way’s bulge, some 12 billion years ago, relied on the interaction between enormous clumps of gas and stars, which merged and dissolved in the process. Astronomers have observed this interaction taking place in faraway galaxies at high redshifts.

The size of Terzan 5’s second population of stars tells us that a tremendous amount of gas was present in this patch of space during bulge assembly. What’s more, the supernovae explosions required to infuse the younger stars with heavy metals would have ejected a large amount of material out of the system entirely. Taken together, the evidence indicates that when the Milky Way’s bulge was forming, Terzan 5 would have been 500 to 1000 times heavier than it is today. It was a monster in the sky, laden with primordial gas.

“[Terzan 5] is the relic of a structure that was much more massive in the past: a fossil of the epoch of the galaxy formation,” Ferraro said. “Such galactic fossils allow us to reconstruct an important piece of history of our Milky Way.”

Ferrano and his co-authors are now conducting an extensive search for other stellar systems similar to Terzan 5, which could help us learn more about how our galaxy, and others like it, assembled. Like archaeologists sifting through dust to unearth clues about past civilisations, astronomers are now sifting through layers of information encoded in starlight. The history books are going get a lot longer as a result.