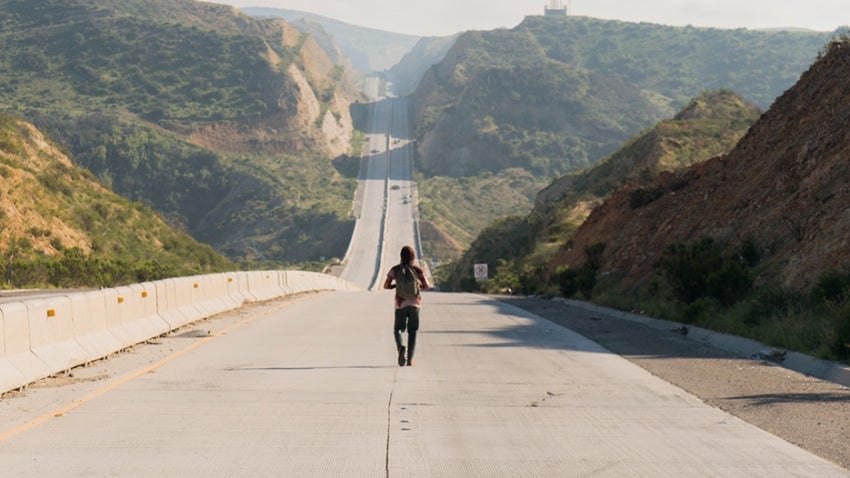 The latest behind-the-scenes featurette for the second half of Season 2 of Fear The Walking Dead shows us what’s in store for our spinoff heroes. In short, they’re searching. What for remains to be seen, but let’s hope it’s a more cohesive story.

Though the video isn’t available for viewing in Australia, we can give you the gist of it.

According to the video, the gang is South of the Border and many of them have gone their own way, looking for the next stage in their lives. Whether it’s Travis and Chris scavenging on their own, Nick heading to Tijuana to find like-minded zombie allies, or Madison and the others bunking in a hotel, it’s about staking a claim in the new world of the dead.

“The characters are really spun away from one another, and finding out who they are now that things have just changed dramatically,” Colman Domingo, who plays Strand, said.

Photo by Richard Foreman/AMC
There’s also a big emphasis on the ethical lines being drawn between our heroes. Nick (Frank Dillane) allies himself with a pro-zombie group who believe that the zombie “curse” is actually a gift of everlasting life. In the San Diego Comic-Con trailer, you actually see someone sacrificing himself to the zombie hoard, possibly as part of a ritual or ceremony.

“I’m trying to get to a safe place, or where there might be more people who empathise with the dead, or at least just don’t go around killing them,” Dillane said.

Photo by Richard Foreman/AMC
This is a theme we saw echoed through the first half of Season 2. In the midseason finale, Celia kicked Strand out of her house after he shot his boyfriend Thomas in the head, who was also her son. That’s because she was keeping the zombies of her loved ones in her basement, unable to let them go.

It was one of the stronger points in an overall hit-and-miss show, so I’m hoping things get better from here. Remember the boat? Let’s forget the boat. Fear The Walking Dead returns to AMC on Aug. 21. [ComicBook.com]