Why I’m Loving No Man’s Sky

There’s a fantastic episode of the original Star Trek series called “Arena”, where Captain Kirk is forced into one-on-one combat against the Gorn. No Man’s Sky feels like the best part of that story stretched out into an entire universe.

In “Arena”, Kirk has to scour the barren landscape of the planet he’s trapped on to figure out how to survive. When he builds that crude cannon that fires diamonds at his reptilian enemy, it’s a victory of technology and the mind. His refusal to kill his enemy shows that his experience has helped him evolve his understanding of the cosmos.

I’ve been having the same kind of experience playing No Man’s Sky on PS4 for about a week. Hello Games’ long-awaited opus is a space exploration game that takes place in a universe spun together from millions of different parts that manifest in weird lifeforms and planetary bodies. For me, the game feels like it homes in on the idea of scientific information being the key that unlocks the horizons of the universe. From the very beginning, I’ve been asking myself, “How do I find the elements I need to get off this planet/into another star system, while also absorbing all the newness I’m encountering? Oh and I also need to stay alive too?” Those questions dovetail into bigger, fundamental existential concerns that animate good science-fiction: “How do I find out more about the universe around me, while maintaining the balance of my earthbound life? How do I integrate what I learn/create into an ever-expanding understanding of things?”

No Man’s Sky isn’t a game about repelling an hostile alien threat; it’s a game where you’re the xenoform, bouncing your lost and confused self from planet to planet. There’s a lot about science-fiction that we take for granted, like the idea that there’d be logic that human brains could follow. While No Man’s Sky does present players with familiar design ideas — resource-gathering and crafting systems and decision-point plot structure — its true triumph is maintaining a feeling of wonder and aloofness. Space would have to be lonely and full of mystery, right? And just because mankind can build the tools to escape Earth’s gravitational pull doesn’t mean we’d be smart enough to understand what we find out in the cosmos. This universe doesn’t care how much of it you see or understand. It will exist without you. 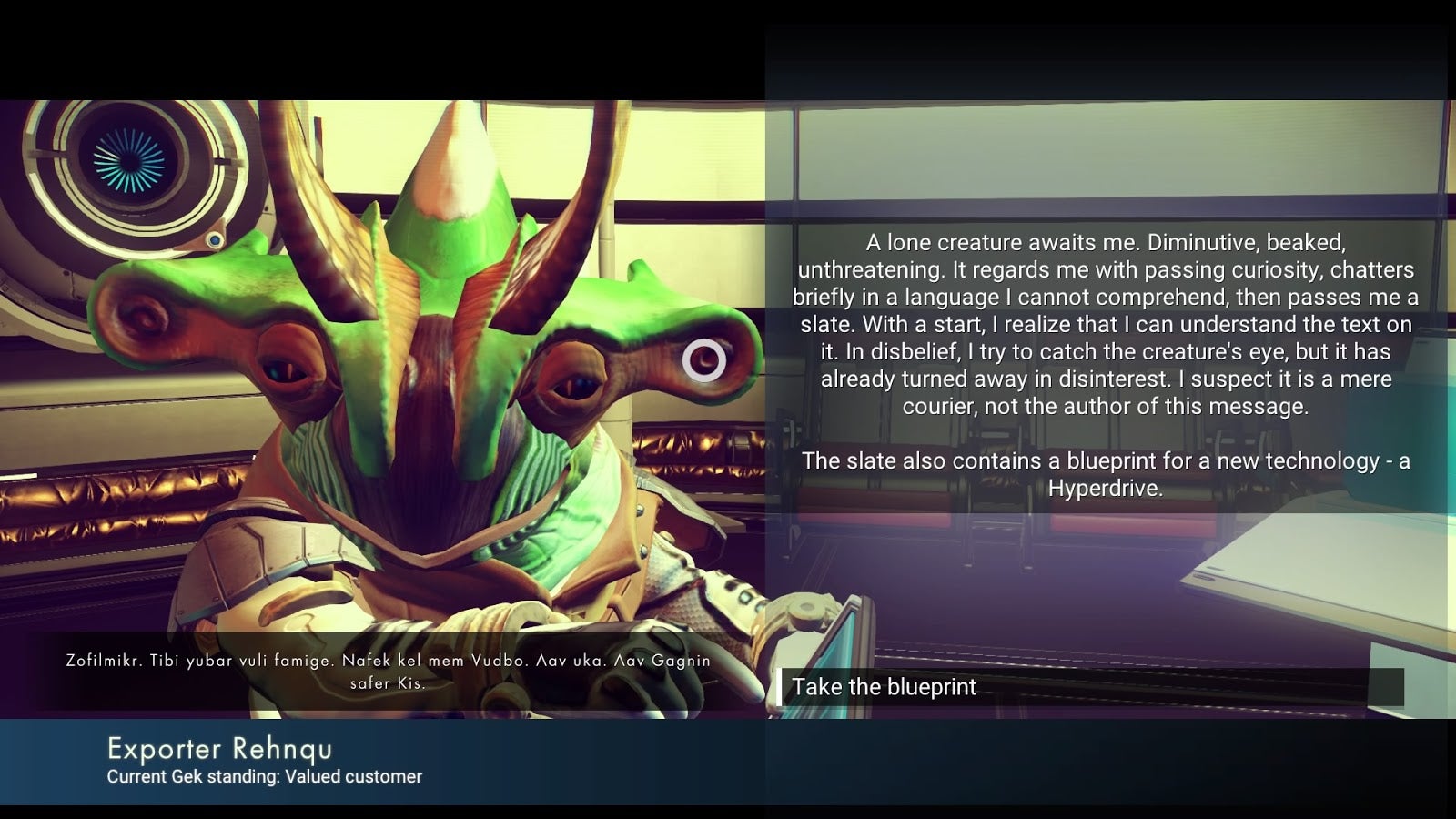 Each little discovery drives me to slide my fingers across the texture of the game more and more. At one point early on, I fed a little insectoid quadruped on the planet I started on. It was the third species of fauna I’d fed so, other than a smiley icon hovering over it, I wasn’t expecting anything special to happen. But then it wandered off and a question mark replaced the smiley icon. The darn little critter rooted around and found me some stuff. Then it wandered away to rejoin others of its kind, nuzzling up against a tentacled pink-and-beige plant.

For every new planet, lifeform or location that I scan and upload, it feels like there are hundreds more that are waiting to be found. I’m not making a dent, as far as quantification of data goes. I have to throw the idea of one-hundred-percenting this game out the window. It’s coming across as a big, long fable and that kind of goal-setting doesn’t seem to be the point.

My favourite kinds of science-fiction have always been the realities where you could fill in the negative space with your own imaginings. One of the things I like about Star Trek as a concept is the idea that neither the starship crews nor the audience was seeing everything that was floating in the void. There was just too much variability in the universe; literally anything could be out there. How would we deal with it?

My experience in No Man’s Sky so far leads me to think there’d be some pretty stupid stumbles at first. At one of the monoliths left by ancient civilisations spread throughout the galaxies, I was presented with a choice to grab for powerful resources or leave the balance of things alone. 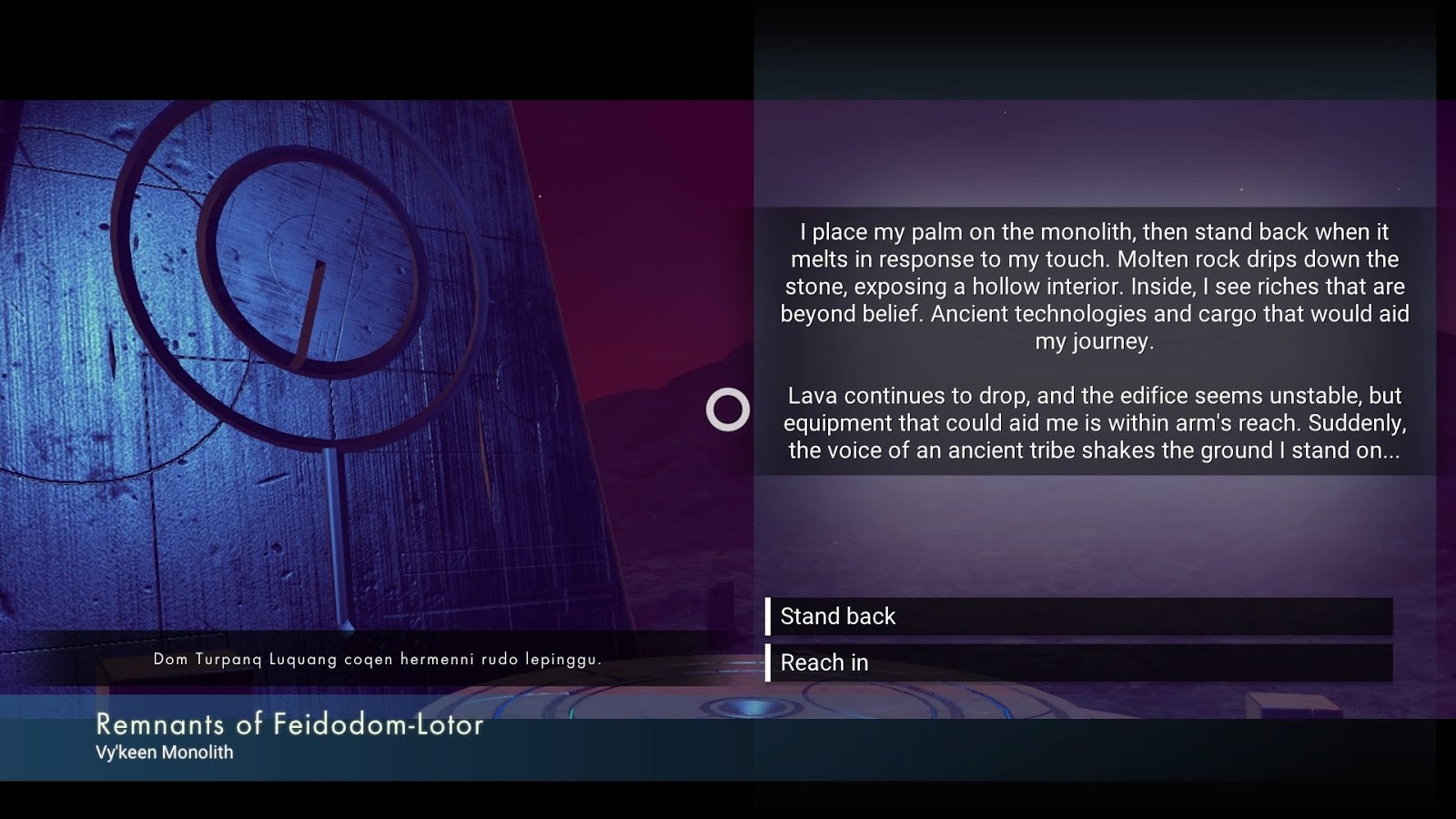 Everything I thought I understood about the culture led me to believe a show of force would be the way to go so I made the decision to loot. It was the wrong one, a move that left my health damaged and standing with the local race decreased. I made another similar gaffe with a Vy’keen functionary at a trading post. Discretion, not money, was the coin required to open transaction.

My knee-jerk response — well, of course, he wants money — made me ignore the text prompting a swap of inventory. Obvious in hindsight, but also a sign of how the norms of different cultures clash in tense situations. Disappointment is a fact of existence, something that loads of games never acknowledge.

I found an abandoned ship on the second planet of the second star system I discovered. It was a far better craft than the starter bucket I was flitting about in. But it had busted launch thrusters and other broken elements, and I couldn’t juggle enough inventory to gather resources to fix it. I had to leave it behind. I understand enough of how No Man’s Sky’s procedurally generated design works operationally to guess that I’ll stumble across another ship soon enough. But I’ll never stop thinking about that silver-painted could-have-been. I found it, put a fair amount of work and resources into it but still couldn’t claim it as mine. I know there are probably several ways I could have shuffled things to get that ship, but pressing onward felt more important.

No Man’s Sky tickles the part of my brain that enjoyed DC Comics’ Elseworlds projects and Robert Heinlein’s The Number of the Beast when I first read them years ago. The promise of realities based on variations of what we already know is a deceptive one. Pay attention and you’ll understand how things have been re-ordered, it whispers. But I’ve realised that I don’t want to make sense or impose order on No Man’s Sky. I’m having too much fun trying to suss out how to make my way.

That classic “Arena” episode of Star Trek ends with Kirk and the Enterprise crew lightyears away from the planet where the life-or-death battle happened. The prize that Kirk won was an affirmation of why he and his fellow Federation members were boldly going in the first place. They’re all answering some ineffable call to the unknown and doing the best with what they encounter. No Man’s Sky makes me feel the same way. For once, I don’t want to be the saviour-master of the universe in a science-fiction video game. I just want to breeze through its vistas, leaving marks that bear witness to my journey.