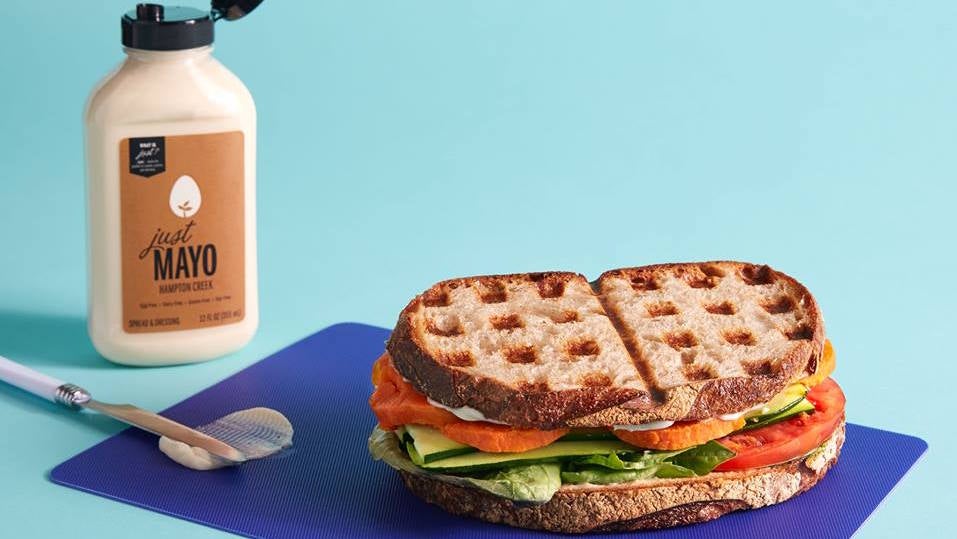 Hampton Creek is a Silicon Valley startup that sells, among other products, an eggless mayonnaise substitute called Just Mayo. The company reportedly had some surprising “customers”, however: People it paid to buy the product. Oh, Silicon Valley. Always looking to disrupt the natural order of things.

According to a detailed new report from Bloomberg‘s Olivia Zaleski, Hampton Foods engaged in a supremely sketchy operation to buy back its own mayonnaise. The company says this was done for quality-control purposes; a number of contractors who spoke with Zaleski say it was done to artificially inflate demand.

Hampton Creek reportedly paid contractors to visit stores around the country and buy jars upon jars of Just Mayo — in one case, a contractor bought 140 jars in one day, according to receipts. Contractors were also ordered to call grocery stores and ask about the product to “stoke demand”.

The company claims that all of this was done to ensure that Just Mayo was up to par. “These folks did an awesome job for us, primarily in helping us improve our quality,” Caroline Love, the company’s “vice president of mission”, told Bloomberg. “They were our eyes and ears on the ground. I’m proud of what we did and how we continue to do it.”

The contractors, however, pretty much call bullshit on this, and also said that the cost of whatever they bought was included in their wages — meaning that they ended up paying more in taxes.

As for how they got away with purchasing such large quantities of mayonnaise, Love provided some helpful tips:

“I might go through the self-checkout lanes, or make several transactions going to different cashiers each time to avoid questions like, ‘Why are you buying so much mayo?!'” Love wrote [in an April 2014 email]. “Make sure you are not wearing your HC gear when you go into Safeway. This is an undercover project.”

And as for what they did with all that damn mayonnaise, “most say they threw it in the trash”.

Just Mayo is marketed as a replacement for conventional mayonnaise as a healthier, environmentally-friendly alternative. It’s gotten a fair amount of buzz, as well as positive press, and received $US90 million ($118 million) in funding in 2014. It says its backers include Yahoo co-founder Jerry Zheng.

To be honest, though, it’s somewhat unsurprising Hampton Creek decided to pay people to buy its product, because much like vegan barbecues, vegan mayonnaise is a culinary abomination. Those contractors had it rough. Can you imagine showing up at a Woolworths and buying, like, 20 jars of vegan mayo? Silicon Valley, you unfeeling bastards.