The Science Behind The Horrific Crash That Hospitalized An Olympic Cyclist 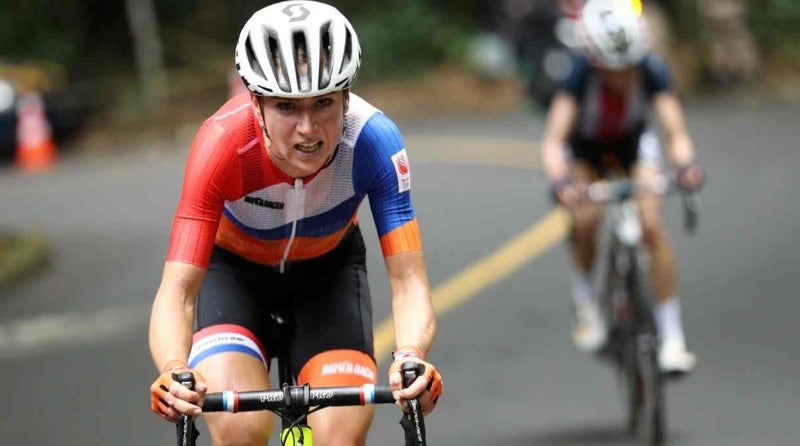 Dutch Olympic cyclist Annemiek van Vleuten is recuperating in intensive care after an horrific crash on the cycling track during the women’s road race event at the 2016 Rio Olympics. The rider suffered a heavy concussion and three small fractures in her lumbar spine, although she was apparently conscious and able to speak, and there were no signs of internal bleeding.

This is the second cycling crash on that part of the track in as many days. On Saturday, Italian cyclist Vincenzo broke both collar bones when he crashed during the men’s race.

It’s difficult to tell precisely what happened without a close examination of high-quality video in slow motion. But former Olympic champion cyclist Chris Boardman had a few choice words about the design of that particular segment of the track, which has some treacherous edges he feels put the cyclists at risk. “We knew it was way past being technical; it was dangerous,” he told the BBC. “The people who designed the course and said what safety features were needed had seen it as well and left it.”

“We knew the descent was treacherous,” he added. “I looked at that road furniture and thought, nobody can crash here and just get up. It is really bad and that is what we have seen today.”

Road furniture is cyclist-speak for barriers, medians, and curbs and what not. According to physicist Diandra Leslie-Pelecky, author of the book The Physics of NASCAR: The Science Behind the Speed, curbs in particular can be treacherous for cyclists. “There’s zero run off,” she told Gizmodo. “When the front tire hits something, it stops. That creates a torque that rotates the cycle and basically bucks the rider. That’s why she landed the way she did.”

Leslie-Pelecky said that, based on the video, it looked like van Vleuten’s crash started when her front wheel crossed the painted line on the road. In the US, at least, road paint is less “grippy” than the asphalt. “When you’re going that fast, you’ve got a very small part of the wheel in contact with the road at any time, so if anything gets between your wheel and the road, it’s catastrophic,” she said. “For a car tire, it doesn’t happen until you get enough water under the wheel, but the tires they’re using are so thin that it doesn’t take much [to cause a crash].”

Physics is central to most sports, if only because how an athlete manages his or her center of mass is so critical. “The problem [in cycling] is that when you lean into a turn, you risk moving your center of gravity too far over your support and falling,” said Leslie-Pelecky.

Van Vleuten’s teammate, Anna der Breggen, ended up winning the women’s race. “I was pretty shocked. I think she crashed hard,” der Breggen told The Guardian. “I realised I was at the front of the team, so I had to chase. I did it for Annemiek.”