The ‘Mufgel’ Is The Latest Foodie Abomination 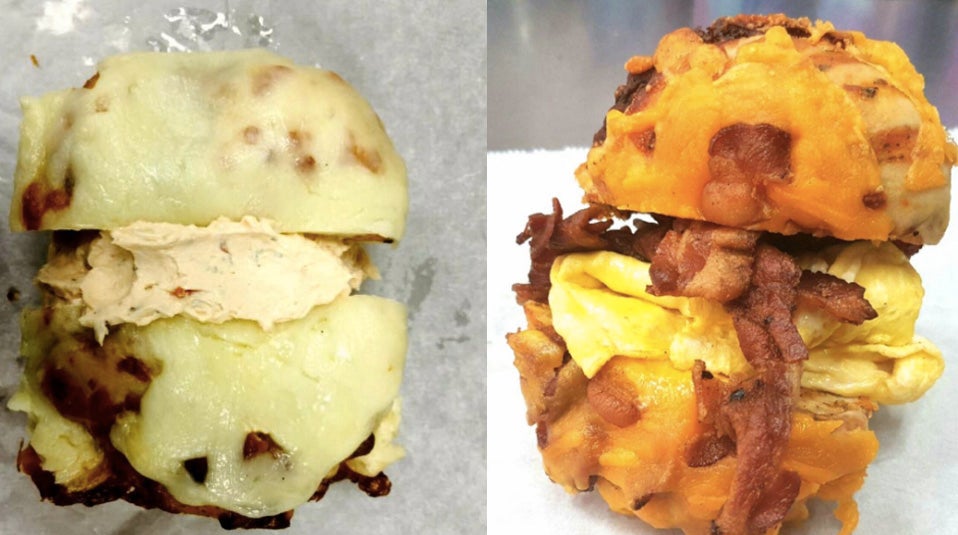 Neither is real, but both are better than what the “mufgel” actually is: A muffin-bagel hybrid. It was introduced in late July by Scot Rossillo, proprietor of The Bagel Store in Brooklyn, and the same culinary visionary who gave us the rainbow bagel. It’s an abomination.

According to Gothamist, Rossillo was “inspired by a Quick Draw radio commercial which made fun of food crazes in New York City”. You know what constitutes a bad response to a radio commercial making fun of a food craze? Creating an even dumber food craze. Bravo!

Call me crotchety. Call me old-fashioned. Call me a cynical, close-minded, boring blogger with no imagination and no sense of “fun” and “whimsy”. Go ahead, arseholes. I don’t care. A mufgel has no place in our food canon. Muffins and bagels are fine by themselves. Why mash them together in a way that’s both unappetising and uncreative? The cronut, at least, was interesting, in that it kind of made sense — a croissant and a doughnut are both sweet, and the resulting creation was an entirely new baked creature, rather than an ugly, Frankenstein-esque “pastry”. (Also, the cronut was first.)

The mufgel — and I will take this opportunity to once again decry the name, because even “buffin” or “magel” or “baggin” would have been better choices — is not pretty, nor does it even look that good.

That looks like a Donald Trump giving birth to overdone bacon!

Have I tried the mufgel? No. But I oppose it on principle: It’s a gimmicky way to cash in on a “crazy” food trend. It’s a cunning business ploy disguised as “new” and “crazy”, but sticking two things together doesn’t make something innovative. It’s the natural conclusion — and what we deserve, I guess — for slapping everything we eat on Instagram.

This year has been difficult, depressing and awful enough — why would you want to pile on by destroying two perfectly good food items when you could have left them alone? Why, Scot? Why? If this isn’t a sign of the apocalypse, then I fear deeply for the other sick, twisted crap the future has in store for us.