Scorpius Malfoy Saves Harry Potter And The Cursed Child From Itself 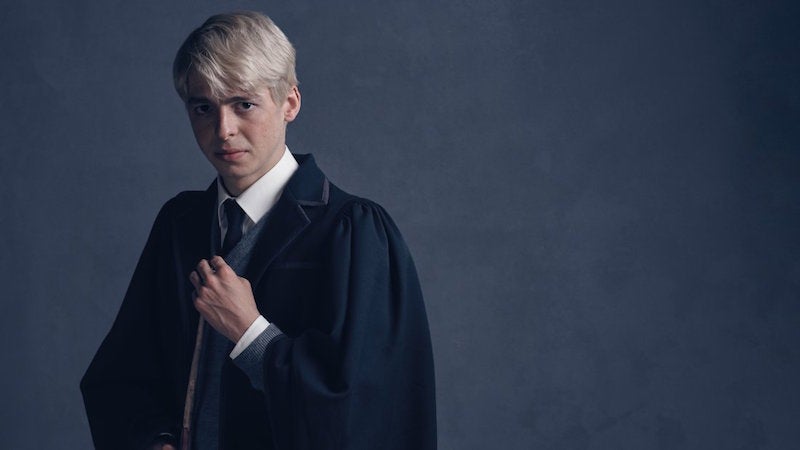 At some point while reading Harry Potter and the Cursed Child, it becomes abundantly clear that Scorpius Malfoy is the best-written character in the whole thing. He’s the most original part of the whole play.

Harry Potter and the Cursed Child is exactly the sequel to the Harry Potter books that you’d expect. It’s like a microcosm, made up of all the best and worst parts of the J.K. Rowling’s original stories. (Also, to be excruciatingly clear about what Harry Potter and the Cursed Child is — since there’s apparently still some confusion on the matter — it’s a play that was written by Jack Thorne from a story that he, Rowling and John Tiffany came up with. And the book that came out is a copy of the script the cast had during rehearsal.)

It’s really easy to have mixed feelings about Harry Potter and the Cursed Child. On the one hand, the whole thing serves to undermine the saccharine perfection of the epilogue of Harry Potter and the Deathly Hallows, although since that ending was a major bone of contention, it’s nice to see that period given more depth. On the other hand, the play’s plot is confusing as hell, containing a ton of time travel and a villain who is, of course, the daughter of Voldemort. (I refuse to call it “fan fiction”, as I don’t like using that as a pejorative, and I’ve read a lot of Harry Potter futurefic with much more original and compelling stories than The Cursed Child.)

The thing about the play is that it’s a play, so everyone does a lot of talking. And for Ron, Harry, Ginny and Hermione, it’s a constant battle to figure out if they “feel” right. Albus Potter is basically Harry as he was circa Harry Potter and the Order of the Phoenix — a teenager caught in the world’s longest temper tantrum. There are a lot of highs (Harry and Draco Malfoy’s childish fight and Ginny’s reaction) and lows (what Harry does with the Marauder’s Map).

Scorpius Malfoy, however, is this play’s secret weapon. He’s both incredibly three-dimensional and consistently written. It’s basically a miracle. Despite the fact that people think he’s secretly the child of Voldemort, his real dad’s not a fan of his “follower” tendencies and his mum dies in the play, he’s a remarkably stable kid. Not one without problems, obviously, but one that feels relatable. The brief scene where he talks about his mother’s death has more poignancy to it than the melodramatic bit at the end of the play where we see Harry’s parents die. Again. (I swear, Harry’s parents are going for the record held by Thomas and Martha Wayne.)

Scorpius is a nerd — like, really, truly a nerd. And while it would be so, so easy to make the smart friend of Albus into someone like Hermione, he’s not. His tone is more of “happy geek” than “type-A personality”. Check out this little bit, for example:

Albus: First question. What do you know about the Triwizard Tournament?

Scorpius (happy): Ooooh, a quiz! Three schools pick three champions to compete in three tasks for one Cup. What’s that got to do with anything?

Albus: You really are an enormous geek, you know that?

It’s not just charming, it delivers information and it perfectly sums up Scorpius’ character. Scorpius does all the heavy lifting in this play. He’s in the position of both delivering exposition like this and he’s the one who fixes the timeline. Of course, he breaks it again, in the one really stupid moment he has in the play. But the point stands that he’s the smartest one around.

His sense of humour is also perfectly on point. His reaction to being chased by an old witch with spikes for hands is to say, “Well, as fun as you clearly look, I have to go after my friend.” After Hermione’s bookshelves start talking, he says, “I opened a book. Something which has — in all my years on this planet — never been a particularly dangerous activity.”

And then he figures out Hermione’s riddles, because he’s the best.

Every other character in Harry Potter and the Cursed Child is either a retread from the books or one-dimensional. Albus is basically his father, but with his issues based on having a famous dad rather than being famous himself. Rose is as talented as her mother Hermione, but as closed-minded as her father. Delphi is evil, like her father. But Scorpius is decidedly not his father.

And while he does have some issues with his dad, his real problem is that his best friend likes a girl and he’s jealous. Scorpius’ greatest desire is to have a true friend, and Albus leaving him for a girl is his biggest fear. It’s a great story beat because Harry Potter’s mythology has put a lot of store in love, and this underlines that it doesn’t have to be familial or romantic love. It’s also great because it’s a problem that isn’t a daddy issue. Daddy issues dominate the rest of the drama of the play. Scorpius, as ever, gives us a respite.

Scorpius’ intelligence is also not the source of his troubles. The reason kids don’t like him isn’t fair, but it’s not the boring old “nerdy kid gets bullied” story. It’s really nice to see that stereotype missing from the play. Scorpius feels like the kind of nerd you meet at, like, a con. The kind you talk to in line where you pass trivia back and forth in bubbling excitement. The best kind.

Scorpius Malfoy’s presence is a relief throughout Harry Potter and the Cursed Child, rescuing the whole thing from being bogged down in melodrama and repetition. If everything about this play was as perfectly rendered as he is, it would be untouchable.