Why The World May Actually Be Getting Worse

For decades, Ray Kurzweil has consistently been wrong about the future. But people still listen to him for some reason. In fact, organisations reportedly pay him $US50,000 ($66,947) per speech to hear him say inane things about the shiny, tech-utopian world of tomorrow. At one such speech he recently said that the world isn’t getting worse, it’s merely our perception. Allow me to humbly suggest that, at best, Ray Kurzweil is talking bullshit.

Geekwire has a short blog post up about a recent talk that Kurzweil gave. I’m biased, of course. I think that one of the most important ways to go about studying the future is by first gaining a firm understanding of the past. Kurzweil, it seems, has a rather loose grip on history. But I’ll let you be the judge of that.

From Kurzweil via Geekwire:

People think the world’s getting worse, and we see that on the left and the right, and we see that in other countries. People think the world is getting worse. … That’s the perception. What’s actually happening is our information about what’s wrong in the world is getting better. A century ago, there would be a battle that wiped out the next village, you’d never even hear about it. Now there’s an incident halfway around the globe and we not only hear about it, we experience it.

The big problem with this? It’s not true. Like, at all.

Let’s start with the time period he’s talking about: A century ago. One hundred years. That would put us smack dab in the middle of 1916.

Do you know what was going on in 1916? The world was tearing itself to bits with destructive technology. The United States wouldn’t enter the war until the following year, but World War I was the was that would see men being annihilated with tanks, machine guns, mustard gas, the works. And everybody knew about it. How do I know this, sitting here in 2016? I just walked three feet behind me to a bookshelf and looked for some of my magazines from World War I.

The magazines have covers like this, which I just scanned from the May 18, 1918 issue of The Literary Digest: 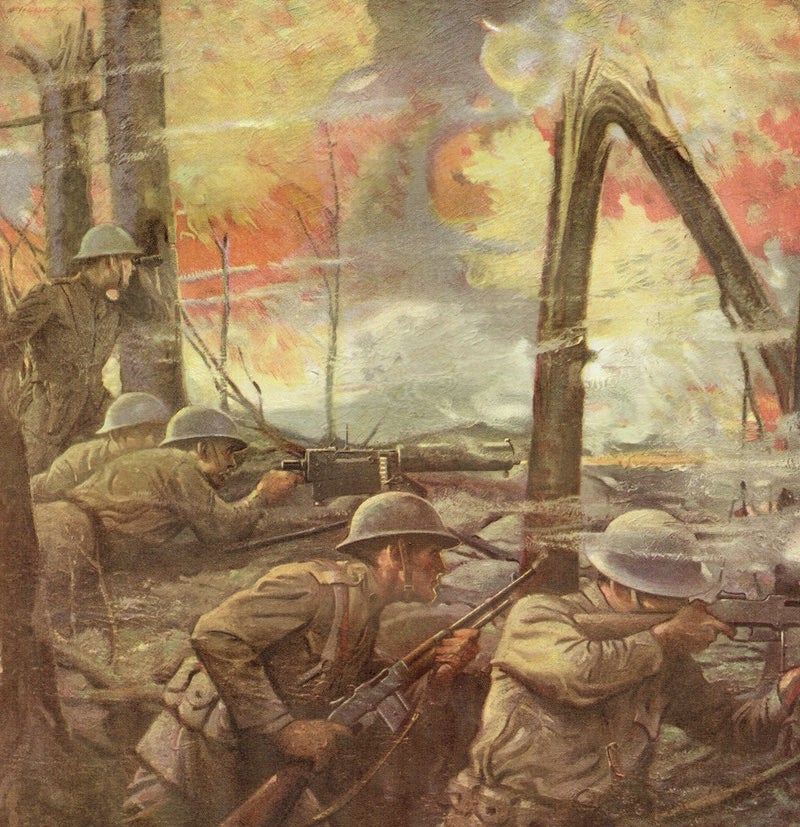 Cover illustration of soldiers in World War I, scanned from the May 18, 1918 issue of The Literary Digest

The world was pretty damn well connected. There were newspapers, magazines, telephones, and radio was in its infancy. And you can go back further. Maybe Kurzweil got stuck in a time warp and meant to say two centuries. That would put us at 1816. Nope, people still got information about the village next door. They even had newspapers. And telegraphs. They may not have had germ theory, but information still flowed.

Yes, I’ll admit that none of this brings the immediacy of war images like Twitter or CNN. But those things have their own problems and present their own biases.

If you knew that the town next door existed, you knew if its inhabitants had just been slaughtered or not. Knowledge has always been power and power has always been survival. If you didn’t know that the village next door had just been slaughtered you were probably next. Knowing didn’t necessarily mean that you could prevent it, but it gave you a shot.

When Kurzweil says “Now there’s an incident halfway around the globe and we not only hear about it, we experience it,” it’s almost an insult to people actually experiencing war and disease and the actual horrors that life dishes out. Yes, when I saw the photos from the recent terrorist attack in Nice, France, it was sickening. But there’s no way that I could feel precisely what it was like to be there. Modern media has brought me closer to the experience, but someone much smarter than I could pretty easily make an argument about how a radio broadcast about that event would have made me feel that experience much more viscerally than the photos I saw on Twitter.

Fundamentally, I understand what Kurzweil’s trying to say. But that doesn’t make it true. Nor does it make it unique, of course. It’s the central premise to Alvin Toffler‘s diagnosis of future shock — that the future is all happening to quickly for us to process. And it’s still wrong. Generation after generation adjusts to the media that evolves with them, for better and for worse.

I’m really not trying to be obtuse in picking apart Kurzweil’s statements. I think he’s tossed out some lazy generalities that people want to be true, and that I’ve had to see pop up in my Twitter stream for the past week. But they’re simply bullshit.

We love to romanticize the past and we so desperately want to believe that we’re so much better informed than our ancestors. We hold this little nugget in our brains right next to the belief that the world is going to hell because nobody knows anything these days. Kurzweil’s wrong, as he’s been about so many things, despite his genius in so many other areas.

After all, Kurzweil does have a gajillion degrees, a gajillion and a half companies, and he certainly contributed greatly to the field of AI research before he went off the futurist deep end.

Perhaps Douglas Hofstadter said it best when describing Kurzweil. Hofstadter explained to American Scientist in 2007, “what I find is that it’s a very bizarre mixture of ideas that are solid and good with ideas that are crazy. It’s as if you took a lot of very good food and some dog excrement and blended it all up so that you can’t possibly figure out what’s good or bad.”

I think in this case we found the dog excrement.