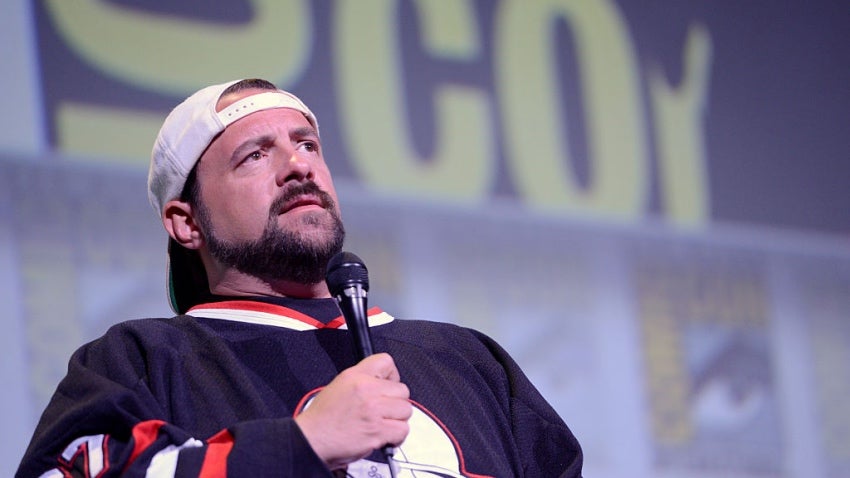 It turns out "Martha" isn't the only name that has a strong impact in the DC Universe. There's also "Supergirl Lives."

That's the name of the Supergirl episode that Kevin Smith has signed on to direct for the second season. Smith's directorial debut on the CW show was confirmed late last week at the TCA Press Tour in Los Angeles, and Smith has since chatted about it on his YouTube series Fat Man on Batman.

Smith has made it no secret how much he enjoys CW's DC Universe. He directed a Season 2 episode of The Flash, where he said he "hit it hard," and has signed on to direct another one in Season 3. He also really likes Supergirl ("I fucking love this show" were his exact words) and said he's doing his homework to get ready for the shoot — mainly learning how the hell to do flying stunts.

As first reported by Comic Book Resources, Smith's lively chat about the upcoming episode surprisingly tugged on the heartstrings once Smith started talking about the significance of the episode's title (it's about 12-minutes in, if you're looking to skip to the feels).

"[Executive Producer] Andrew Kreisberg told me the name of the episode is 'Supergirl Lives,'" Smith said. "I'm going to cry talking about this. The name of the script I wrote back in 1996 was called Superman Lives."

Superman Lives, for those unfamiliar, was the infamous 1996 Superman film that Smith originally scripted for director Tim Burton, with Nicolas Cage starring as Clark Kent/Superman. Unfortunately for Smith, Burton later brought in his own writers to change it up, only for the movie to later be abandoned entirely before production could really get underway.

"I might get to play with Superman. They have added Superman this year. Do you know how fucking mind-bending this is for me?" Smith said. "I was never gonna direct that Superman movie, but I did write it back in the day. To be able to work on a show where it's like, 'Go direct Superman,' like come on man."

Supergirl returns with Season 2 on Oct. 10.