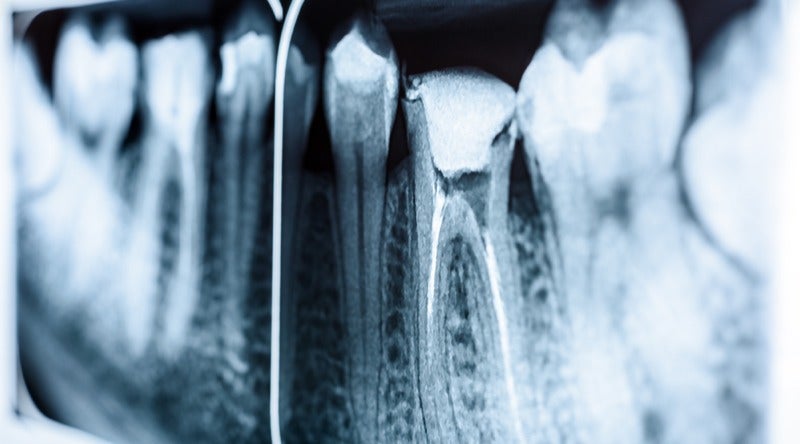 There’s lots of fun things you could be doing this weekend, barring unexpected misfortune — like needing an emergency root canal. It’s arguably the most dreaded dental procedure, but if a promising new type of filling pans out, no one need ever suffer through this often-painful process again.

Man, you do not want to see dead tooth nerves on your dental X-ray. (Image: Radu Bercan/Shutterstock)

Perhaps you are one of the fortunate few to whom the concept of a root canal is a mystery. Let me enlighten you. Dentists typically treat cavities by drilling away the decay and plugging the hole with a filling made of gold, porcelain, a composite resin (tooth-coloured fillings) or an amalgam of some sort (usually an alloy of mercury, silver, copper, tin and sometimes zinc).

But those fillings can fail, and when that happens, all the soft tissue at the centre of the tooth — nerves, blood vessels, that sort of thing — can get infected, and eventually die. And more often than not, the tooth does not go gently into that good night. It may start as a dull ache, but quickly morphs into what I once described as a “throbbing undercurrent of inflamed rage”.

When that happens, you need a root canal to save the tooth. Once the patient is anaesthetised, the dentist will open up the tooth and scrape out all the nerve tissue and pulp (blood vessels), then fill it with gutta percha and cap off the whole shebang with cement. With all the soft tissue gone, the pain subsides, but now there’s no blood flow to the dead tooth. To maintain its structural integrity, most dentists follow up with a pricey porcelain crown.

In short, root canals — even the milder variety — are no fun, and it would be awesome if we never had to deal with them again. So three cheers for a team of scientists from Harvard and the University of Nottingham, who’ve come up with a new type of synthetic biomaterial for fillings that is regenerative. It actually stimulates the growth of stem cells in the pulp, which could repair damage from tooth decay. Damaged tooth, heal thyself! This would greatly reduce the number of fillings that eventually fail, and hence would reduce the number of root canals.

Small wonder the team placed second in the materials category of this year’s Emerging Technologies Competition, sponsored by the Royal Society of Chemistry.