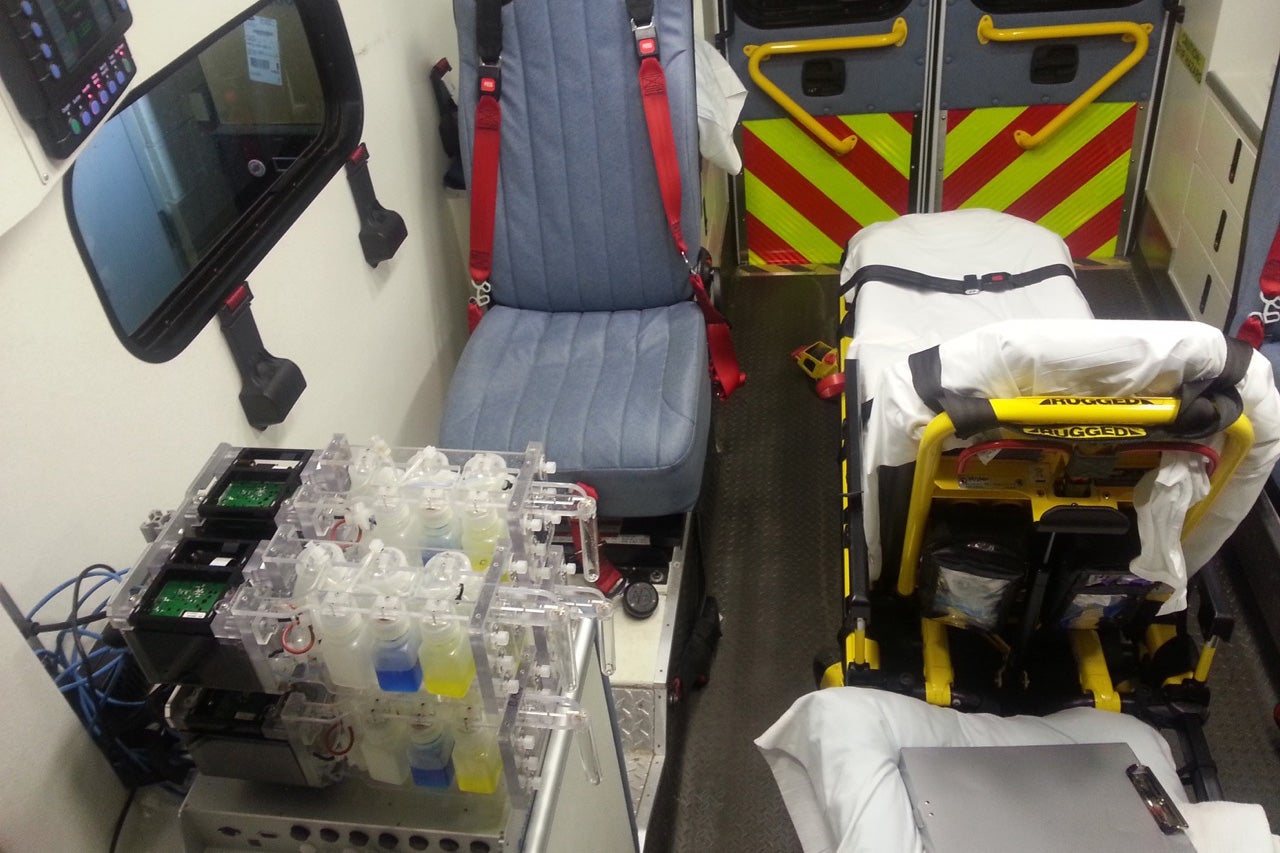 If you're a doctor working in a remote area or on the battlefield, getting access to medications can be tough. That may sound like the start of a commercial, but it's a sometimes tragic fact. As far as we've come in the history of medicine, treatment isn't as portable as we would like.

The device can be used in ambulances, for example. Image: Researchers/MIT

A team at MIT is working to combat that, even on a smaller scale. In a paper, published Friday in Nature Communications, researchers detail a portable production system that can produce a drop of liquid from a device containing programmable yeast cells, for example.

Yes, you read that correctly. Pichia pastoris is a strain of yeast that can be "induced to express one of two therapeutic proteins when exposed to a particular chemical trigger," according to MIT.

In this case, the yeast is held in a micro-bioreactor, which contains a micro-fluidic chip (also developed at MIT). The user feeds a liquid containing a specific chemical trigger into the reactor where it can mix with the yeast. There, it is pressurised with the help of silicone rubber, which helps in the mixing process. Because silicone rubber is gas permeable, oxygen can get into the cells and carbon dioxide can get out.

If the user wanted to use a different protein, the liquid could be flushed out through a filter.

"Imagine you were on Mars or in a remote desert, without access to a full formulary, you could program the yeast to produce drugs on demand locally," Timothy Lu, an associate professor and senior author on the study said.

While this process would still be expensive, Lu and other authors on the study suggest manufacturing a strain like Pichia pastoris, which has multiple uses.

"If you could engineer a single strain, or maybe even a consortia of strains that grow together, to manufacture combinations of biologics or antibodies, that could be a very powerful way of producing these drugs at a reasonable cost," Lu said.

Plus, using the machine to produce something like vaccines would be valuable since, according to the paper, it could reduce any "undesirable background production" or be transported to an area where geography is a factor.

Maybe they should talk with the other team at MIT that produced a portable pharmacy that can produce small quantities of drugs in a space the size of a fridge. Combining a micro-bioreactor with a compounding pharmacy can be very effective for helping out in rural areas or dire situations where access to the CVS down the road isn't available.