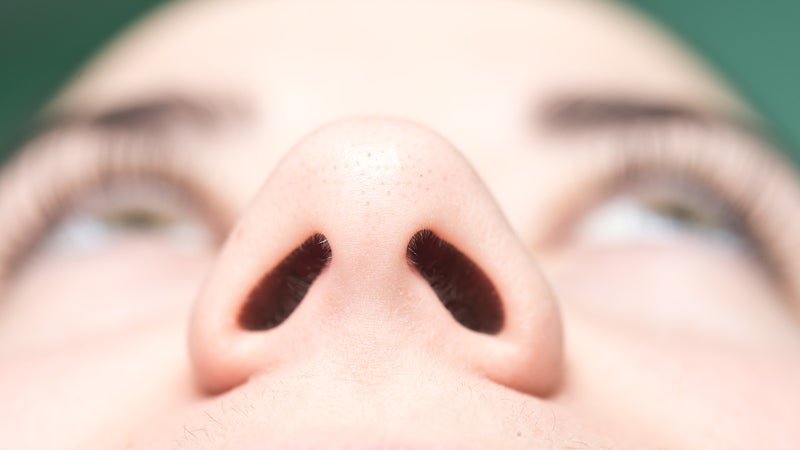 Scientists have discovered a microbe in the human nose that produces an antibiotic lethal to the MRSA superbug, among others. The discovery could lead to powerful new therapies to treat problematic bacterial infections, while also demonstrating the potential for the human body to produce bug-killing compounds. Image: Shutterstock

As we inch closer and closer to the antibiotic apocalypse, researchers are hunting far and wide for undiscovered microbes capable of staving off antimicrobial resistant bacteria. To date, scientist have searched for such bugs in the soil, at the bottom of the ocean and even on the surface of a Dalek. But as a new paper published in Nature points out, we should also be looking in the human body — particularly the gunk inside our noses.

Andreas Peschel and colleagues from the University of Tubingen discovered the new bacterium, Staphylococcus lugdunensis, while trying to solve a longstanding mystery. For some reason, about 30 per cent of all humans have Staphylococcus aureus bacteria in their noses, and the remaining 70 per cent do not. It turns out that S. lugdunensis features antibiotic properties that are toxic to S. aureus, making it an ideal candidate to fight certain bacterial infections. The researchers weren't actually trying to find a new antibiotic, but it appears that's exactly what they have done.

Armed with this knowledge, the researchers created a new antibiotic medicine called "lugdunin", and it's the first of an entirely new class of antibiotics. It's also the first time that an antibiotic has been developed from one that actively works to suppress a competitor in the human body. Lab tests showed that lugdunin can be used to treat skin infections in mice, and destroy methicillin-resistant S. aureus — the superbug otherwise known as MRSA — in both rats and mice.

The researchers aren't entirely sure why the newfound bacteria is toxic to S. aureus, or if the new antibiotic is safe or effective in humans. More work is needed, though clearly the bacteria doesn't seem to bother the one in three people whose noses it infests. It's also not known if antibiotic resistance will eventually develop in people, which seems likely given the rapid rate at which bacteria are evolving to resist current antibiotics.

All this said, the preliminary results are promising, and the researchers are optimistic that similar bacteria-fighting microbes are still waiting to be discovered within the human body.