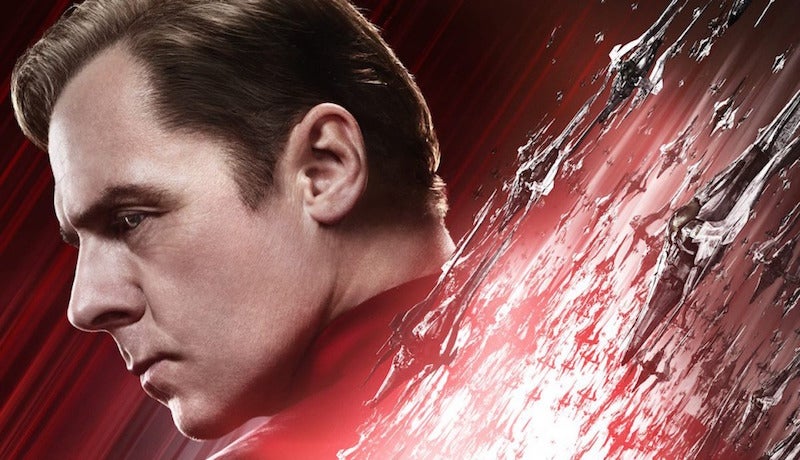 It's been a bit of a rollercoaster ever since the the news of that big development in Star Trek Beyond. And now, the writer of the film, Simon Pegg, has his say. Image: Star Trek Beyond, Paramount

Yesterday, it was revealed that a scene in Star Trek Beyond showed Sulu raising a child with a male partner. The Herald Sun said that the decision was a "nod to George Takei". Then Takei himself said that he thought he had talked director Justin Lin out of showing a gay Sulu in the movie and that it was, in his eyes, "twisting of Gene's creation" and "really unfortunate".

Takei further told the Hollywood Reporter that he argued for creating a new gay character, rather than change Sulu. Simon Pegg (who not only plays Scotty in the movie, but wrote the script) "respectfully disagrees" that they should have done that instead.

The Guardian printed a response from Pegg, and here's everything of his it printed, in the order it presented it:

I have huge love and respect for George Takei, his heart, courage and humour are an inspiration. However, with regards to his thoughts on our Sulu, I must respectfully disagree with him.
He's right, it is unfortunate, it's unfortunate that the screen version of the most inclusive, tolerant universe in science fiction hasn't featured an LGBT character until now. We could have introduced a new gay character, but he or she would have been primarily defined by their sexuality, seen as the 'gay character', rather than simply for who they are, and isn't that tokenism?
Justin Lin, Doug Jung and I loved the idea of it being someone we already knew because the audience have a pre-existing opinion of that character as a human being, unaffected by any prejudice. Their sexual orientation is just one of many personal aspects, not the defining characteristic. Also, the audience would infer that there has been an LGBT presence in the Trek Universe from the beginning (at least in the Kelvin timeline), that a gay hero isn't something new or strange. It's also important to note that at no point do we suggest that our Sulu was ever closeted, why would he need to be? It's just hasn't come up before.
I don't believe Gene Roddenberry's decision to make the prime timeline's Enterprise crew straight was an artistic one, more a necessity of the time. Trek rightly gets a lot of love for featuring the first interracial kiss on US television, but Plato's Stepchildren was the lowest rated episode ever.
The viewing audience weren't open minded enough at the time and it must have forced Roddenberry to modulate his innovation. His mantra was always 'infinite diversity in infinite combinations'. If he could have explored Sulu's sexuality with George, he no doubt would have. Roddenberry was a visionary and a pioneer but we choose our battles carefully.
Our Trek is an alternate timeline with alternate details. Whatever magic ingredient determines our sexuality was different for Sulu in our timeline. I like this idea because it suggests that in a hypothetical multiverse, across an infinite matrix of alternate realities, we are all LGBT somewhere.
Whatever dimension we inhabit, we all just want to be loved by those we love (and I love George Takei). I can't speak for every reality but that must surely true of this one. Live long and prosper.

There are points of agreement here, in that both Takei and Pegg think that the lack of an LGTBQ+ character in the original series was due to the time it was made and not due to Roddenberry's own beliefs. It's more that they disagree on how that Roddenberry legacy should be portrayed now.

They also disagree about the effect of choosing an existing character. In Takei's mind, it creates the impression that the character had been closeted. In Pegg, Lin and co-writer Doug Jung's it meant that audiences had a "pre-existing opinion of that character as a human being, unaffected by any prejudice".

Both of them share the same fundamental beliefs about Star Trek and Gene Roddenberry, and have come to entirely different conclusions.