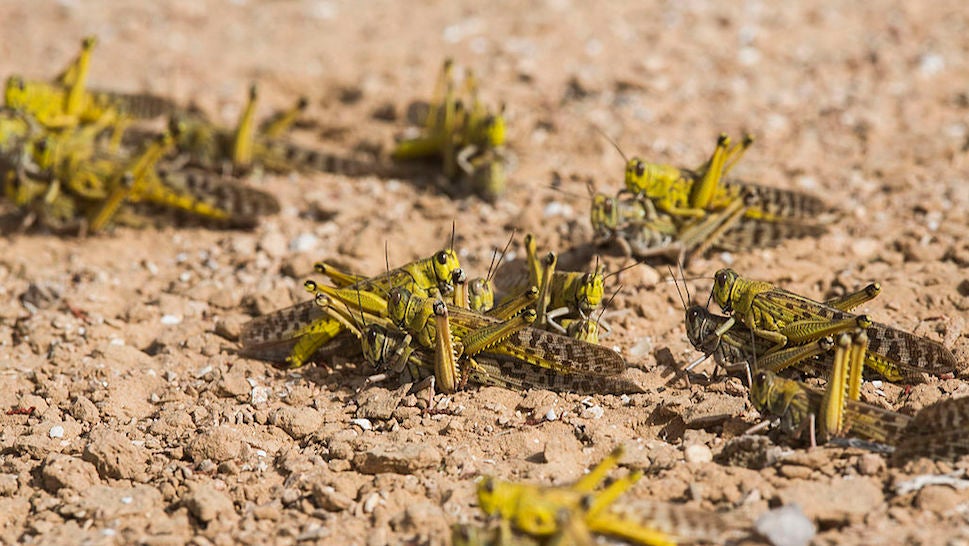 Locusts contain multitudes. Though traditionally associated with Biblical plagues that destroy crops, it turns out that they could have a second career as remote-controlled cyborgs that sniff out explosives. This possibility is only slightly less terrifying. Image: Getty

Most animals have a better sense of smell than human, and dogs (and sometimes rats) have long been used to find bombs. Locusts have a few advantages over dogs: They're smaller, can fly to more inaccessible locations, are less likely to trigger an explosion and, let's be honest, are not nearly as cute and way less likely to make us feel guilty if they die during this mission. "It took only a few hundred milliseconds for the locust's brain to begin tracking a novel odour introduced in its surroundings," Baranidharan Raman, a professor of biomedical engineering at Washington University in St Louis, told the BBC.

So the Office of Naval Research awarded a $US750,000 ($1 million) grant to Raman to continue turning these bugs into defenders of safety. First, he's creating a silk nanomaterial "tattoo" that can be placed on a locust wing. This tattoo generates heat and a laser beam then controls the locust remotely by heating up the wing to move it closer or further away from an area. An onboard chip monitors neural signals, which are then sent wirelessly to the operator and turned into a simple LED: Red for yes, green for no. Raman hopes to have working cyborg locusts in two years.

Raman isn't the only one who has seen the potential of locusts. Israeli engineers created a 12cm robot locust that can jump 3m and scour disaster zones. If you really think about it, locusts are heroes.