I love a good mechanical keyboard. There’s something so satisfying about hearing the light tapping noises when I punch down on the keys. While mechanical keyboards are highly prized by gamers and coders, they can also be appealing to those that work on PCs on a regular basis. I often work from home so having a keyboard that is suitable for gaming and work would be the Holy Grail for me. Does the Ozone Strike Pro fit the bill? Let’s find out.

I had a membrane gaming keyboard at home for the longest time and while it was adequate for playing games and other typing tasks, it never gave me joy. Yes, joy. Because you can actually derive joy from keyboards. For me and many others that interact with PCs on a daily basis for work and play, a decent mechanical keyboard can make a world of difference. If you can make something that you do everyday a little bit more pleasant, why wouldn’t you?

I’m extremely comfortable with gaming mechanical keyboards. As response times, customisability and comfort are important, keyboards targeted at gamers are likely to be very well built. But often they look gaudy as hell and are riddled with superfluous keys, which can be intimidating for somebody who is seeking a keyboard for professional and gaming use. The Ozone Strike Pro is an exception. 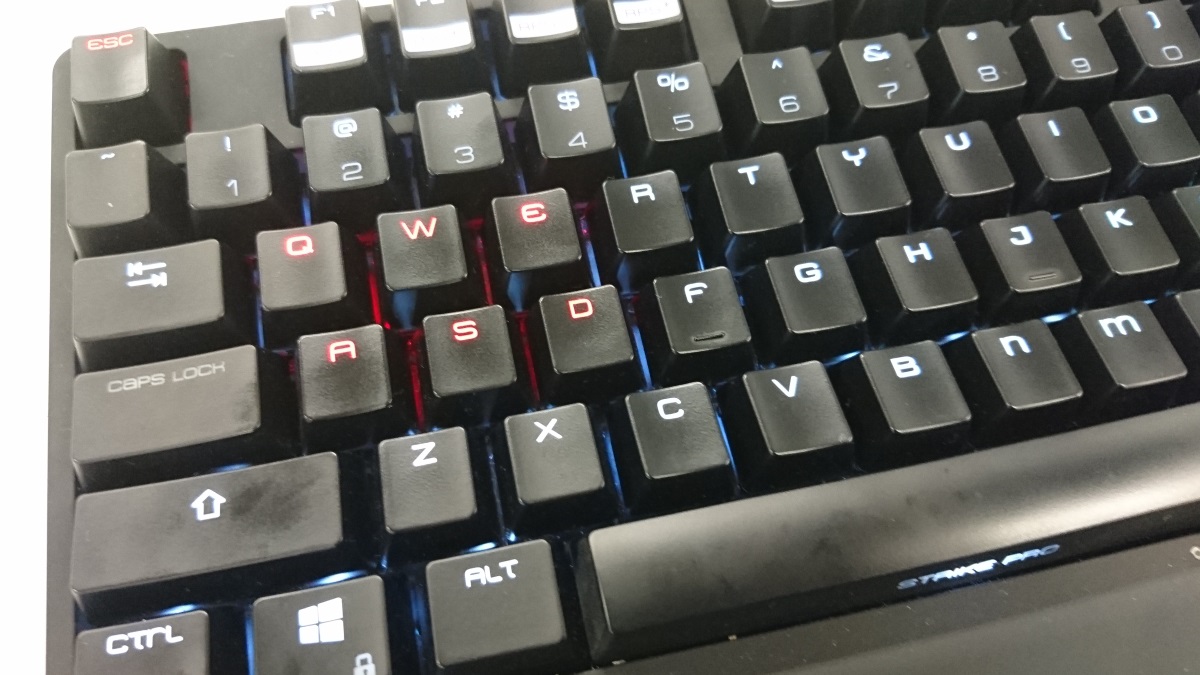 The Ozone Strike Pro is surprisingly restrained in its design given that it’s marketed to gamers. It’s sleek and the backlight doesn’t make you want to rip your eyes out. Measuring 34.30 x 441 x 135.70 mm, it’s quite compact. I had no problem carrying it from home to work in my backpack (please don’t judge me).

Bonus points for the matte finish on the frame, which is a personal preference, although it does catch onto dust more easily. The keys themselves are semi-matte, so it doesn’t reflect that much light but they do hold fingerprint stains remarkably well. Not recommended for people who like to snack at their desk.

Prior to using the Strike Pro, I had a keyboard with around 12 keys for macros and a whole host of standalone buttons. I didn’t really use many of them. The Strike Pro saves space by limiting the number of macro keys to six and combining them with the editing keys. Multimedia controls are integrated with the function row on top.

The drawback of these integrated keys is that you can activate them by holding down the “O3” button then pressing them. You can also turn on “Gaming mode” by pressing “O3 and the Print Screen key, which will disable the Windows key (best. Feature. Ever. for gaming) and enable the six macro keys. The problem is that “O3” button sits on the right-hand side of the right Alt button. I know there are many other keyboards that put the modifier key (usually the “FN” key) in that spot but for me, it’s kind of awkward to use your left hand to tap on the function keys; I’m used my other hand to do this. It wouldn’t be such a problem if the important alternative function keys like volume up and down and the activate “Gaming mode” button weren’t all bunched up on the right-hand side.

Besides that complaint, I quite like the layout of the keyboard. It’s evenly spaced out and, as I’ve already mentioned, the fact it’s so compact is a plus, especially if you plan to travel with it.

If I really did have to nitpick, Ozone has made the backlight on the “Q,W,E, A, S, D” and the directional keys bright red. It’s a bit uncomfortable to look at and there’s no way to turn it off so that you get the soft white backlight that the other keys have. However, it’s not a deal breaker for me.

The Ozone Strike Pro comes with Cherry MX Red switches, although the website says versions are available in blue, black, red and brown. All switches have different characteristics and it’s worth checking out this guide by The Keyboard Company for a detailed analysis.

The local distributors for the Ozone Strike Pro, however, told us that “all Strike Pro retail keyboards in Australia” will be Cherry MX Red switches — even though the review unit I received had Cherry MX Brown switches. That worked out well because the Brown pretty much sits in between Red and Blue, making it a suitable for typing and gaming. Put simply, MX Brown gives you that satisfying click when you type and each key still has some resistance to give you more tactile feedback.

I’ve spend a bit of time with the Strike Pro now and it’s very good as a work keyboard. Cherry MX Browns are great for typists and the tactile feedback gives you more control as you type a string of characters. Meanwhile, the Cherry MX Red, which is preferred by a lot of gamers, requires less pressure for the keys to register and lacks that tactile “bump”. This can make it easier to make typos.

Most users will feel at home on a keyboard with MX Brown if they’ve been using membrane ones their whole life. This makes it a good option for those who are looking to make their move to mechanical keyboards. But if you’re used to chiclet keyboards, you’ll probably want to opt for the Cherry MX Red version.

You can customise the macros and set up to five profiles for the Ozone Strike Pro through a specialised program. It’s easy enough to use but it’s ugly as sin and janky as hell. The program lagged nearly every time I’ve used it and sometimes it takes a few goes to get it to launch. I’m 80 per cent sure the software crashed my computer on several occasions.

If you do get it working, there’s a bunch of customisations you can do for the six macro keys and if you want to set up a profile for work, you can assign functions like launch email or run command to those buttons.

The software is by far the biggest let down and it’s something that Ozone should fix up as soon as possible. This is a problem that you wouldn’t expect on a premium keyboard.

The macro keys support shortcuts, so if you do a lot of copying and pasting for your work you can assign them to the macros. Unfortunately, there aren’t dedicated keys to cycle through each of the profiles (not that I found anyway) so you’ll have to turn them on through the God awful Ozone program, which is very inconvenient. Kind of annoying to have to do this if you’re swapping between different games.

The Ozone Strike Pro is a good all-rounder if you’re looking for a keyboard for work and play. The design is conservative enough to use in a professional environment but it still serves as an adequate gaming keyboard.

Hardcore gamers may wrinkle their noses at the small number of macro keys but unless you’re playing professionally, you can probably live with it. Lack of dedicated media keys may also deter some people.

Comfort-wise, I don’t really have many complaints besides the awkward “O3” key that is used to activate special functions. I have to say the keyboard is quite pricey at $289. The program that is used to customise the keys leaves a lot to be desired and you’d expect the software to work properly when you’re paying such a high price for a keyboard.

If you like Cherry MX Brown keyboards and want something that will be good for working and gaming, the Ozone Strike Pro isn’t exactly a bad investment. But there are definitely comparable keyboards out there that cost a bit less.