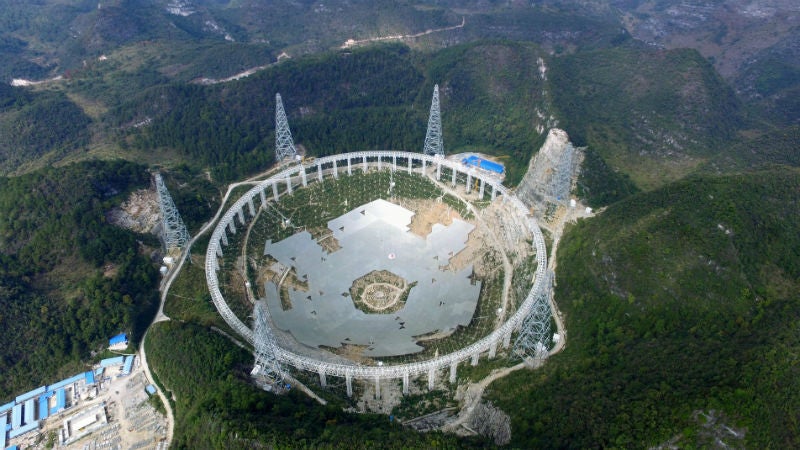 China just finished building the world's largest radio telescope, and is now better-equipped at searching for aliens. According to Xinhua, about 300 "builders, experts, science fiction enthusiasts and reporters" watched the installation of the Five-hundred-metre Aperture Spherical Telescope, or FAST, in the southern Chinese province of Guizhou. The project took five years and 1.2 billion yuan ($238.7 million) to complete, and the reflector covers the area of roughly 30 football fields.

FAST is almost twice as large as the next biggest radio telescope, which is in Puerto Rico. It will be used for early-stage research by Chinese scientists for a couple years, and then be used more widely. FAST is capable of detecting gravitational waves, pulsars and, eventually, amino acids on other planets.

Everything come with a price. In order to make room for FAST, the Chinese government displaced 9000 people who lived in the area, and to do so paid these people only 12,000 yuan ($2387). The government could have done much better here but considering China's long history of displacing people (over 40 million displaced since the 1970s), this is a relatively paltry number.

Let's hope the telescope lives up to its promise. As Liu Cixin, a Chinese sci-fi writer who won the 2015 Hugo said, "I hope scientists can make epoch-making discoveries."

[Xinhua via The Next Web]