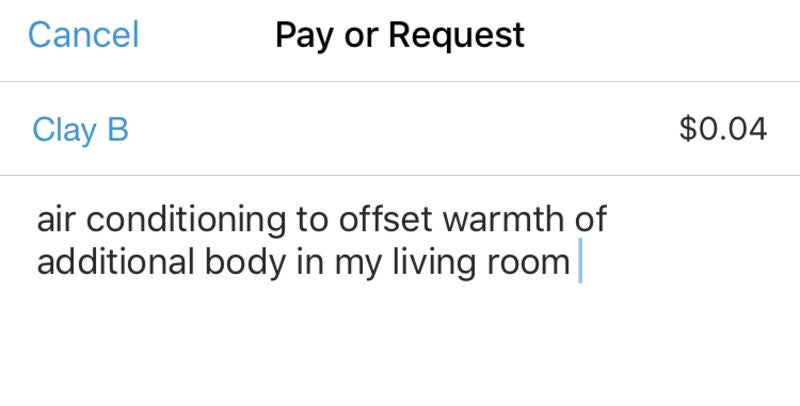 It was only a matter of time before spam came to Venmo, a digital wallet service in the US. Frankly, it's astonishing that it took so long to figure out the marketing secret: You can message anyone on Venmo, so long as you send them as little as one cent. Or, perhaps other companies figured it out much earlier and decided that this was a bad marketing strategy. Not the WaterIsLife charity, which sent one cent to people appearing in its feed, along with creepy messages. For example, according to TechCrunch, if you Venmoed money for pizza, WaterIsLife would send that person one cent with a caption like, "1 cent can't buy you pizza. But for just 3 cents, you can buy someone clean water for a day." How much can I pay to make sure nobody sends me messages like this?

It worked, at least a little: WaterIsLife didn't say how much it spent on the campaign, but it did receive $US400 ($535) in donations on the first day. Americans can now live in fear that other businesses will follow suit, or make their accounts private so they don't show up on other people's feeds. (Venmo did not immediately respond to comment asking whether it planned to block this type of mass transaction.)

It's not that being asked for donations — especially from a clean water charity — is a bad thing. We're all used to "give us money" pleas on social media platforms, enough so that Facebook is embedding charity fundraising directly into the site.

But WaterIsLife campaign feels unexpected and personal. We're used to seeing everyone's Kickstarter campaign, but that's a general plea, not an unsettling personalised message that targets people for their frivolous purchases and reminds us yet again that we're under surveillance.

It's certainly true that buying clean water is usually a better use of money than buying a slice of artichoke pizza, and perhaps we should all have thicker skins and stand to be reminded of that. But money is already an incredibly fraught and emotionally complicated topic, and requests for money from strangers, no matter how worthy the cause, should be treated delicately. If this catches on across Venmo, it will make the app, and the delicious voyeurism of its news feed, a lot less appealing.

On the other hand, this loophole can certainly be used for great amusement. Be right back, everyone, I have some choice one-cent messages to send some folks.