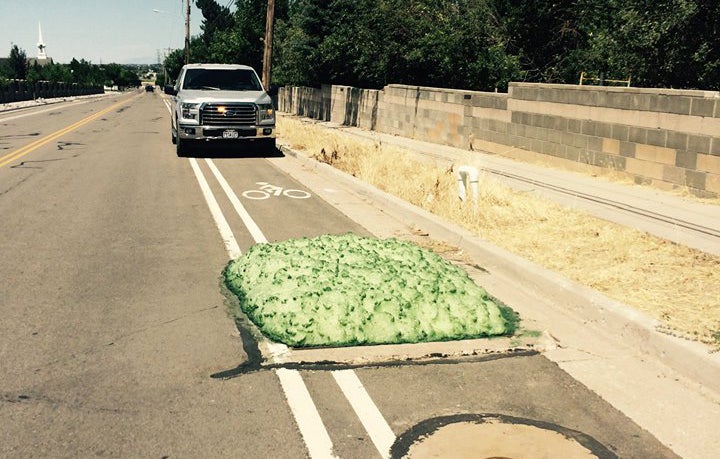 Residents of Bluffdale, Utah received quite a shock yesterday when an enormous blob of pale green foam sprung forth, seemingly out of nowhere, from a roadside irrigation gate. Image: Bluffdale City/Facebook

The road was quickly closed off by the city as Salt Lake County Health Department officials were called out investigate. Initially, residents were concerned that the foaming might be the result of some sort of toxic algae. (Not a crazy hypothesis, given that an enormous, shit-fuelled algae bloom is currently underway in nearby Utah Lake.)

Nope, not a scene out of the new #Ghostbusters movie, this was found coming out of a Bluffdale drain today. pic.twitter.com/IxWZkX3BV4

But, as health department spokesperson Nicholas Rupp told Gizmodo, a more likely explanation is that this is the result of routine moss cleaning taking place in the Welby Jacobs Canal to which the storm drain is connected.

"At this point, we certainly don't believe the foam is related to algae," he said. "All evidence points to it coming from the moss cleaning process, because that process creates foaming."

Rupp added that the health department took water samples from the Welby Jacobs Canal before the incident on Wednesday, and a final determination is expected by late today or early next week. In all likelihood, the foamy mystery will wind up having a rather boring resolution — but man, it sure does look like aliens.