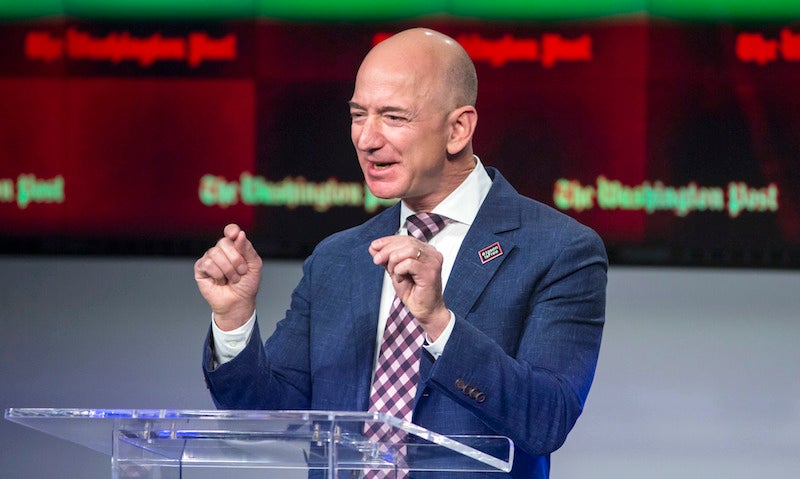 Would you like to cameo as an alien in an upcoming Star Trek movie? Step one: Acquire several billion dollars. Apparently the movie cameo comes free of charge. AP Photo/J. Scott Applewhite.

Director Justin Lin and producer J.J. Abrams confirmed Bezos' role on Friday, saying that the very, very, exceedingly wealthy man plays an alien featured in the background of a specific scene. From The Hollywood Reporter:

"He was awesome," said Lin. "It was like a president was visiting, you know? He had a big entourage! But it didn't matter because he was so into it. He had to wait around all day because it was one day we were shooting, like, three different scenes and, it was also credit to Jeff because... he just nailed it every time."

Seeing as the role was mainly "standing in the background and not calling unnecessary attention to himself", I'm not sure how high the difficulty of the performance was, but whatever. More power to him. Honestly, if I had this much money and clout, I'd do the exact same thing for Star Wars. Hell, I'd happily buy myself a walk-on role in a Star Wars movie if I could. I'll give kudos to Bezos for having the restraint to content himself with being a background alien instead of surreptitiously handing over million dollar bills or gold krugerrands or whatever until he's appointed Grand Admiral of Starfleet.

If any of this makes you angry or jealous, all I can tell you is that obscene wealth still doesn't necessarily buy people knowing who the hell you are:

"I was there for the bit with his, like, nine bodyguards and three limos. It was really intense," said Chris Pine, who stars in Star Trek Beyond as Capt. James T. Kirk. "I had no idea who he was. Not a clue. But he was obviously very important."