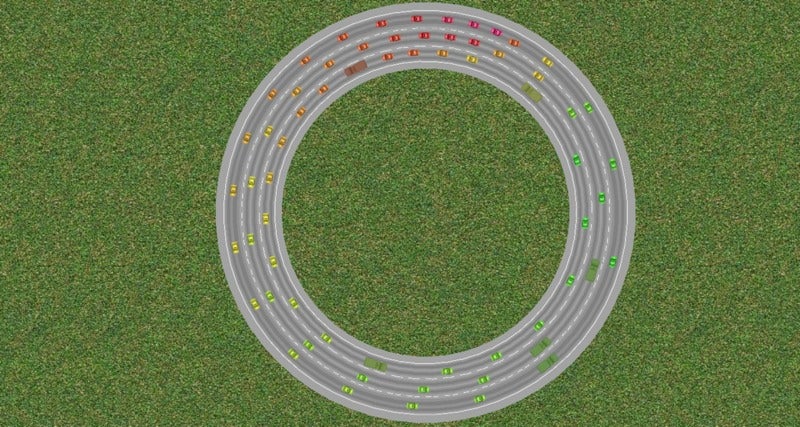 Every driver has experienced the frustration of traffic jams that develop out of thin air on the motorway — no accident, no lane closure, no presidential motorcade. Just a sudden, maddening, inexplicable slowdown. Now you can explore this phenomenon firsthand with an online interactive simulation. Image: Martin Treiber/Traffic Simulation.de

It's the creation of Martin Treiber of the Dresden University of Technology in Germany, who studies these so-called "phantom traffic jams". He designed the interactive model to demonstrate how the interplay of perturbations and bottlenecks together with a high traffic flow will cause various types of traffic. The ultimate goal is to figure out clever ways to reduce traffic jams without having to add lanes or widen roads.

Currently, you can play around with a simple "ring road" system with cars shown in red and trucks in black, varying the average density of vehicles — one of the most critical variables at play when it comes to the physics of traffic, along with the average distance between cars, and average speeds.

The simulation looks an awful lot like a 2008 real-world experiment conducted by a team of Japanese scientists at Nagoya University. They had 22 cars drive around a circular track, asking the drivers to move at a steady 30km/h. Despite the drivers' best efforts, there were still tiny fluctuations of braking and speeding up, and this reverberated around the track. The result: Occasional brief standstills.

The Japanese team concluded that phantom traffic jams arise because there are just too many cars on the road. It's a density problem. There's a certain critical density threshold for traffic, and once it's reached, even tiny fluctuations can cause a chain reaction that eventually results in a jam.

That's in line with a traffic model developed by Boris Kerner of the Daimler Benz Research Institute in Stuttgart, Germany, who found that traffic follows the physics of self organisation. There are three categories: Freely flowing traffic, jammed traffic and an intermediate state called synchronised flow, in which densely packed cars become "highly correlated", meaning that they move in unison. This creates a feedback mechanism in which a tiny perturbation — a single driver braking unexpectedly — will send little ripples of corresponding slowdowns through the entire chain of cars behind him/her.