What Was Going On With Earth's Magnetic Field A Billion Years Ago? 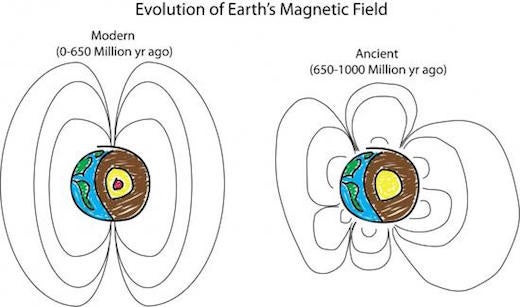 We know about our North and South poles, but what about an East, West, or slightly-to-the-left pole? According to new research published in Geophysical Research Letters, around one billion years ago, that might have been a possibility.

Peter Driscoll, a staff scientist at the Department of Terrestrial Magnetism at the Carnegie Institution of Washington, said in this study that instead of having a "strong" magnetic field with two opposite poles, the Earth could've transitioned into having a "weak" field that fluctuated wildly between several poles.

The magnetic field is produced from the Earth's core, protecting the planet from cosmic radiation and other particles. Therefore, as the core solidified around 650 million years ago, according to Driscoll's simulations, it greatly affected the poles, the timing of the solidification event coinciding with the Earth transitioning back into a dipolar model.

"What I found was a surprising amount of variability," Driscoll said. "These new models do not support the assumption of a stable dipole field at all times, contrary to what we'd previously believed."

Driscoll also modelled the Earth's magnetic history going back 4.5 billion years. Scientists can predict this history by analysing rocks that bear the signature of a magnetic polarity and matching it with a certain era. So this is just a hypothesis for now, but further testing and data collection could reveal a more accurate history of our planet and provide more insight into the formation of our magnetic field.