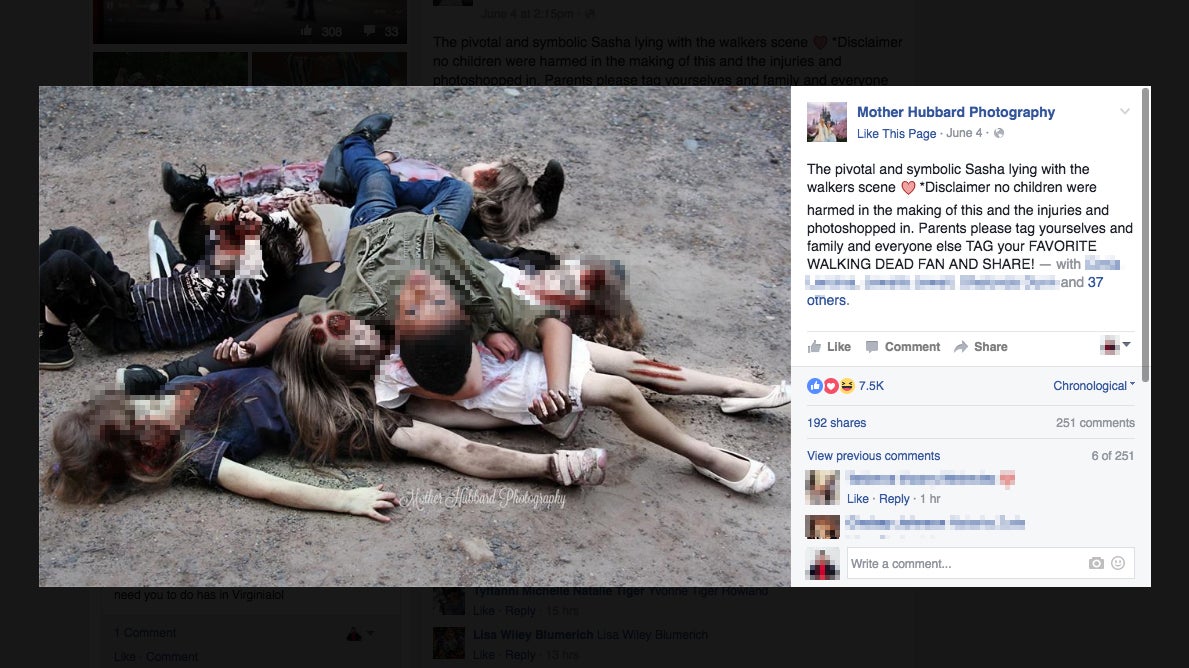 What happens when you mix adorable children with the violence of The Walking Dead? We finally have an answer. Someone has created a photo shoot of some ofThe Walking Dead's most iconic, brutal scenes, but starring toddlers, and the results... well, they speak for themselves

The photos are from Mother Hubbard Photography, a New Jersey-based company that specialises in "outdoor sessions, 1st birthday smashcake photos, modelling portfolios, family, children, maternity, engagements, holiday pictures, & so much more!" If their website is any indicator, this usually does not mean photos of children reenacting fictional moments of hideous violence.

Above, a child Carol gets ready to execute an equally young Lizzie in a recreation of what is generally considered TWD's most harrowing scene. If you're wondering, Alana Hubbard, photographer and the mother of the kids who "star" as Rick and Carol in the photos, had no qualms about the shoot.

"I actually asked my family and friends what the most iconic scenes [of the series] are, and what they would like to see, and I did it off that," explained Hubbard. "I don't see it as a big deal. The kids were all laughing, no children were harmed, no children even had zombie make-up on. It was all edited in Photoshop. They had a fun time killing zombies and running around."

There are many more pictures over at Mother Hubbard Photography's Facebook page, but Hubbard says the kids had an especially good time recreating The Walking Dead's controversial finale, shown above, where Negan (here played by an adorable toddler) chooses which of his victims (also played by adorable toddlers) to bludgeon to death with a baseball bat.

"I have videos on my Facebook feed of the kids running around and playing with each other. And when I was shooting the Negan scene, you can see a live video of that," said Hubbard. "All the kids wanted to get dead. They had a blast!"